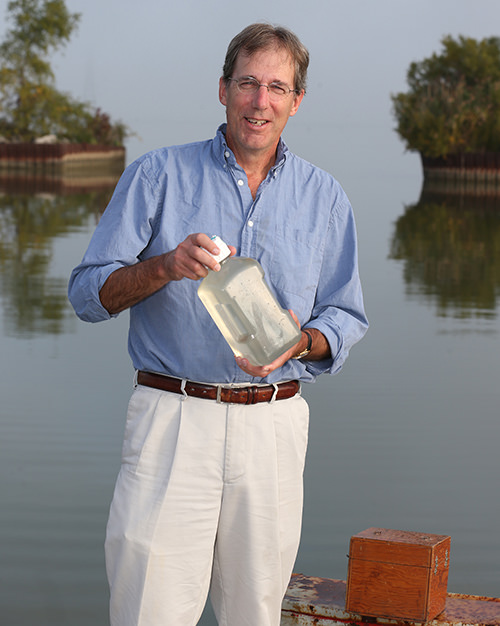 Dr. George Bullerjahn, Bowling Green State University professor of research excellence in biological sciences, has been a pioneer in exploring the causes of toxic algal blooms in Lake Erie and beyond. In recognition of his stature as a scientist and as a faculty member, the BGSU Board of Trustees awarded him the title of Distinguished Research Professor at the Feb. 22 meeting.

Bullerjahn, who midway through his 30-year career transitioned from microbial biology to aquatic biology, applies his considerable expertise and collaborative skills to addressing the international water quality crisis. He recently became the director of the new Lake Erie Center for Fresh Waters and Human Health, a $5.2 million project funded by the National Science Foundation and the National Institutes of Health. Working with colleagues from nine other universities, Bullerjahn is leading the effort to discover the causes of and methods for predicting and deterring dangerous cyanobacterial algae outbreaks.

He has advised various government agencies on how to lessen the effects of human-caused sources of that pollution, wrote Dr. Verner Bingman, Distinguished Research Professor of psychology, in his letter of support.

Bullerjahn is "not a cloistered scientist that sits secluded in his lab. He is a high-profile researcher who actively engages governments and communities in an active discussion on how to fix Lake Erie," Bingman said. "As an example, he and his colleague Dr. Robert M. McKay assisted Rep. Bob Latta (R-OH) in drafting H.R. 212, The Drinking Water Protection Act, signed into law by President Obama in 2016."

He has demonstrated a long commitment to basic and applied research that is directly in the public interest, including studies on Grand Lake Saint Marys and working with a multi-university team to detect, map and warn of harmful algal blooms in Sandusky Bay.

Since joining BGSU in 1988, Bullerjahn has garnered more than $8 million in external grant funding for his research, including 15 NSF grants, and has a distinguished record of more than 90 refereed publications, which are frequently cited by his peers. Those include research on physiology, ecology, food web, cyanobacterial blooms, biogeochemical impacts and potential management of problematic organisms.

"His publications on these topics have . . . had a marked impact on the direction and application of research in the broader field of harmful algal bloom dynamics," Dr. Hans Paerl, Kenan Professor of Marine and Environmental Sciences at the University of North Carolina at Chapel Hill, wrote.

Undergraduate and graduate students at BGSU and other universities have benefited from Bullerjahn's mentorship, noted his supporters, as he helps train the next generation of scientists. He serves as an NSF Research Experience for Undergraduates mentor, and each year students list meeting him as one of the most influential parts of their research experience; a number have gone on to become graduate students, said Dr. Steven Wilhelm, the Kenneth and Blaire Mossman Professor of microbiology at the University of Tennessee at Knoxville.

"To summarize his impact at BGSU, Dr. Bullerjahn is an excellent collaborator and mentor for his graduate students," Dr. Raymond Craig, dean of the College of Arts and Sciences, said. "He approaches his work with a great deal of humility, but also with a great deal of passion."