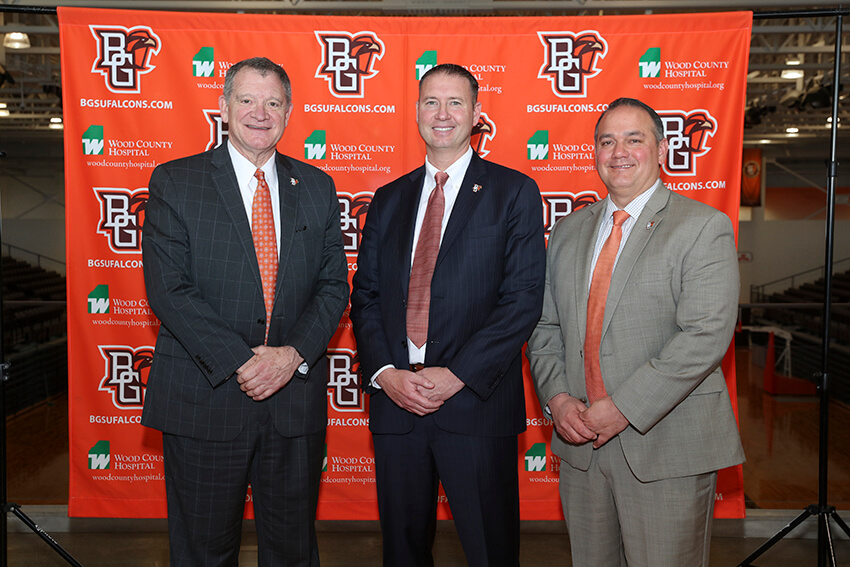 Bowling Green State University handed over the keys to Doyt Perry Stadium to Scot Loeffler, who has been to 15 bowl games as an assistant coach.

Now, Loeffler, who was deputy head coach and offensive coordinator at Boston College the past two season, has been tasked with leading the Falcons back to the Mid-American Conference (MAC) championship at Ford Field in Detroit, where they last won the MAC title in 2015.

"I’m honored to be a part of such a great university."

“I can speak to our continued focus on supporting an intercollegiate athletics program that enhances our university’s national recognition, enriches our student experience in the learning community and supports each of our student-athletes,” BGSU President Rodney Rogers said.

“We cannot accomplish goals without a robust football program. Therefore, I am extremely pleased to announce that Scot Loeffler is our next head football coach. We have high expectations for our team, both on and off the field, and I am confident that Scot shares our commitment to fostering a winning program and winning the right way.”

Loeffler's coaching career, which spans back to his time as a student assistant at Michigan during the 1996 season, includes stops at Michigan, Central Michigan, Florida, Temple, Auburn, Virginia Tech and Boston College. He also spent a year coaching quarterbacks for the Detroit Lions.

“Bowling Green has a wonderful, rich tradition of football, along with an incredible academic reputation,” Loeffler said. “I’m honored to be a part of such a great university. My family and I look forward to developing a program that will make of the BG faculty members, students, former players, alumni and fans proud.

“The passion and the pride for building Bowling Green football are tremendous. I look forward to building great relationships with the faculty, the students, the great community that we have here and the donors who do a wonderful job supporting our program.”

Loeffler has coached seven quarterbacks who went on to play in the NFL: Tom Brady, Tim Tebow, Brian Griese, Chad Henne, Drew Henson, John Navarre and Logan Thomas. He has also directed a potent rushing attack behind sophomore AJ Dillon, who is 12th nationally in rushing yards per game this year. Dillon was the ACC Rookie of the Year in 2017 and the nation's second-leading rusher among freshmen.

Including the 2018 season, Loeffler's teams will have played in 15 bowl games in the past 16 seasons he has been a college coach. In 2016, his first year on staff at Boston College, the Eagles won a bowl game for the first time in nine years.

“There’s a game [Nov. 30] in Detroit: the MAC championship,” BGSU Athletics Director Bob Moosbrugger said. “That’s ultimately our goal. We have the man to lead us there one day.”

A native of Barberton, Ohio, and Barberton High School, Loeffler played quarterback at Michigan from 1993-96. He earned his undergraduate degree in history with a minor in political science.