Stories sell products. And in this age of artisanal, craft and cottage industry goods, stories are all-important in connecting seller to buyer. This reaches another level when those products come from areas of the world where the story is also one of helping someone out of poverty — and that connection is often made through digital media, says Dr. Radhika Gajjala, a Bowling Green State University professor in the School of Media and Communication.

In a new book and during research and teaching travels to Indonesia and India this summer, Gajjala continues her explorations into the crossroads of digital culture and the world of craft. As with her other books, she collaborated with colleagues and her former doctoral students on the research and the co-production of knowledge, and, in some cases, the writing. 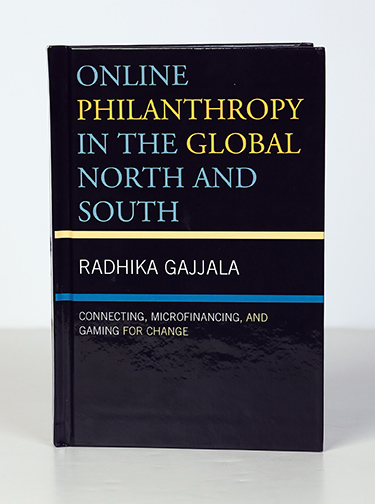 Her latest book, “Online Philanthropy in the Global North and South: Connecting, Microfinancing, and Gaming for Change,” published by Lexington Books, examines aspects of online philanthropy. As she says in the introduction, an overarching question the book investigates is “What happens when Web 2.0 platforms and tools are used to connect people who want to give to the poor of the world? What sorts of formats and strategies are used? What rhetorics of inclusion and exclusion emerge?”

Since many of the heritage artisans are women, the issues raised by this new form of connection often involve gender and whether there is truly empowerment or inclusion in the digital realm, where a culturally and technologically savvy entrepreneur is often needed to make the whole process work. Gajjala explores the impacts of nongovernmental organizations and the “IT-ization” of the online philanthropy phenomenon.

“Online Philanthropy” builds upon her 2013 book, “Cyberculture and the Subaltern: Weavings of the Virtual and Real,” which defined the subaltern as the poor, black or brown person who lives in a traditional setting in the Southern Hemisphere. These are the people, whom Gajjala identifies in this context as “digital subalterns,” who online philanthropy aims to help, whether through digital commerce, lending or the new “games of change,” in which players wager real money in online games with the proceeds going to the rural poor.

As in any industry, in online commerce there is a product, but sometimes the digital subalterns themselves become the “product,” their poverty a commodity and their authentic voice staged and presented to sell the goods, even with the best intentions, Gajjala and her co-authors found. In this sense, they become the “ideal laborer,” she said.

The book presents case studies of labor issues and of how sometimes well-meaning efforts go awry, as in microfinance settings in which the borrower must repay the loan at exorbitant interest rates, becoming part of a “debt circle” that is difficult to escape.

As a dedicated weaver and spinner, Gajjala has firsthand knowledge of the crafts, which she brings to her nearly 15 years of ethnographic research observing handloom weavers in Indian villages.

She has been expanding her research and sharing her knowledge throughout the world, which has yielded productive connections with other scholars and with artisans. During a short Fulbright in Indonesia in 2012, she met Dr. Rustina Untari, who shares her interest in digital cultures, and whose mother is a leader in a weaving community.

This summer Gajjala traveled to East Sumba Island, Indonesia, with Untari, Ridwan Sanjaya and Bernadus Retang Wohangara from Catholic University Soegijapranata and Vinnie Gajjala from Tiffin University to conduct grant-funded fieldwork exploring the “Techno-Entrepreneurship Model of Heritage Product to Global Market.” Funded by the Catholic University Soegijapranata, the team met with the handloom weavers and batik fabric hand dyers and learned about their experiences.

“We looked at such issues as gender and empowerment through the diffusion of technology into these communities for entrepreneurship,” Gajjala said. “We will build a case study on this. It’s another lens into the craft community.”

Untari is coming to BGSU this month to work with Gajjala on a journal article about their findings and will also meet with BGSU students.

Because of Gajjala’s reputation as an expert in digital cultures, she was invited by Dr. Madhavi Reddy of Savithribai Phule Pune University to propose a course for a Global Initiative on Academic Network-funded course this summer. Gajjala taught an intensive seminar called “Studying Gender, Digital Labor and Globalization: Theory and Method” to a group of Ph.D. and postdoctoral students from around the country as part of this Ministry of Human Resource Development, Government of India initiative.

The class explored the ways that gender and technology have defined and redefined each other socially and culturally. Students were introduced to key issues in feminism and technology within the context of globalization and in the specific context of India. They explored important themes such as gendered labor and its role in digital globalization; space, place, technology and the gendered body; and feminist methods.

“It was an amazing experience in learning interactively and the co-production of knowledge,” Gajjala said. “I plunged them into the work and had them do five, unstructured interviews with people. We all learned so much we would not have otherwise — it was a big shift in the way they were used to learning.”