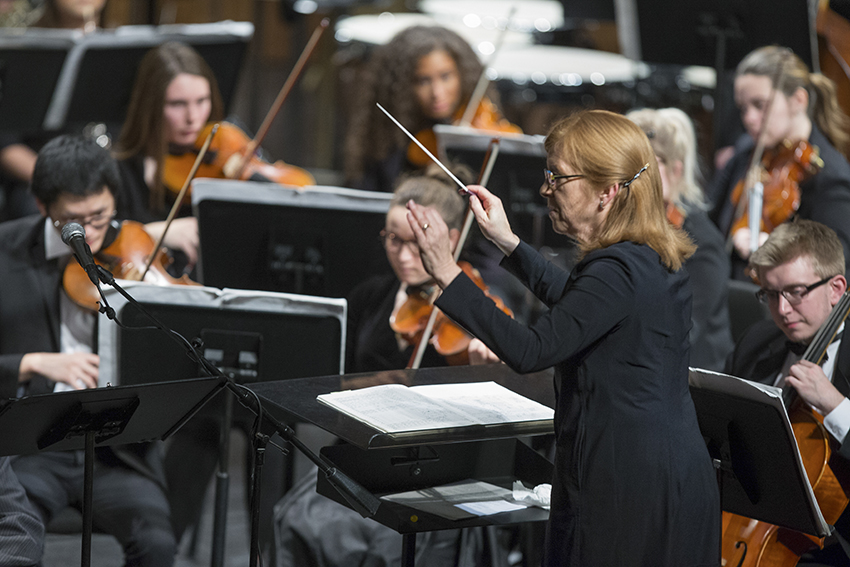 One hundred is a notable anniversary, and the BG Philharmonia is celebrating this important milestone with a year of special events during 2018-19.

Large concerts in December and May in Kobacker Hall are the premier events, and every concert throughout the season will feature something special. Under the direction of Dr. Emily Freeman Brown, the Philharmonia will welcome back alumni members and host guest artists. Talented young musicians from BGSU and local schools will join in some of the performances. And four performances will feature a “birthday” composition — three in the fall and one in the spring.

“This is the beginning of a great year,” said Brown, director of orchestral activities. “I have a terrific group of freshmen and new people. The spirit, the mood, the enthusiasm and the energy are incredible.”

The season begins at 8 p.m. Saturday (Sept. 22) with guest artist Mingwei Zhao on cello, in conjunction with the annual High School Honors String Festival. On the program will be two pieces by Elgar, his “Enigma Variations” and Cello Concerto. Marking the start of the anniversary year, the Philharmonia will play American composer Bruce Roter’s “A Birthday Celebration.”

The performance will begin at 8 p.m. in Kobacker Hall at Moore Musical Arts Center. Advance tickets are $3 for students and $7 for adults. All tickets the day of the performance are $10. Tickets are available online at bgsu.edu/arts or by calling 419-372-8171.

Roter’s composition is one of four pieces by 20th-century composers chosen by Brown to commemorate the anniversary year. During the 39th annual New Music and Art Festival in October, the Philharmonia will premiere Martin Kennedy’s “Theme and Variations” for trombone in a new version for orchestra.

The Dec. 2 gala concert will feature the return of Bowling Green native Zachary DePue, a well-known violinist who is part of a musical BGSU family. His visit holds special meaning for Brown, who was his conductor when he became the winner of the Young Artist Competition as a Bowling Green High School student. The centennial concert features DePue in Shostakovich’s “Violin Concerto No. 1” and Stravinsky’s “Petrouchka.”

Brown is also enthusiastically anticipating Bowling Green Opera Theater’s production of Handel’s “Semele” in April. Audiences will have the opportunity to see this infrequently performed work, accompanied by the Camerata di Campo di Bocce, the elite chamber group of the Philharmonia.

“It’s a challenging piece and the music is so fantastic and so exciting,” she said. “It’s just out of this world.”

The year culminates May 5 with the 100th anniversary concert and alumni gathering featuring Beethoven's Ninth Symphony, with all five University choirs and guest soloists.

As an added touch, each concert during the year will have its own concert program highlighting aspects of the Philharmonia, with photos, testimonials, past program notes and stories about the conductors.

For the first performance, Brown sets the stage with an extensive history and timeline of the orchestra, aided by the program from the 75th anniversary season written by Lee Anne Snook and by Dr. Vincent Corrigan’s “100 Years of Music at Bowling Green State University,” written for BGSU’s Centennial in 2010. Brown said she was interested to learn she is not the first woman to lead the orchestra, but the third. During the second world war, as men left for the service, its first woman conductor, Lorlie Virginia Kershner, took up the baton, followed by Maribeth Kitt.

Recounting the birth of the BGSU orchestra, Brown wrote:

“From the very beginning, University President Homer B. Williams was determined to create what he called ‘the spirit’ of Bowling Green. He gave pep talks to students and faculty, always reminding them that because of their presence and efforts, Bowling Green was, indeed, a special place. He instilled pride and spirit in the young campus. . . In 1918, he decided that Bowling Green needed a group that could provide music at official events.”

Made up of faculty members, the first “orchestra” was “more aspirational than actual,” Brown said humorously, but it developed over time into the strong ensemble it is today.

In the beginning, the orchestra was not called the Philharmonia. It went through several name changes over the years until Polish conductor Grzegorz Nowak arrived in 1982 and renamed it the Philharmonia. Nor was the College of Musical Arts (originally the School of Music) located in Moore Musical Arts Center, which was not built until 1979. The original music building was what later became West Hall.

Over its 100 years, the Philharmonia has nurtured the careers of gifted musicians and conductors who have gone on to illustrious careers in performance and teaching, carrying BGSU’s reputation far and wide.