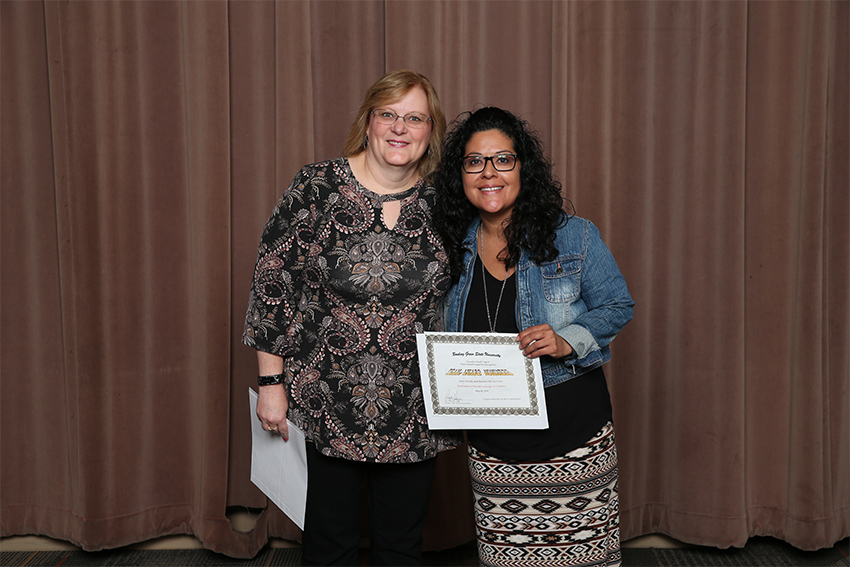 Change is hard. And when it comes to academic departments, each with its own culture and practices, it can be especially challenging. So when the decision was made to merge the German, Russian and East Asian languages department with the romance and classical studies department to form the new Department of World Languages and Cultures, everyone knew it would be a demanding process.

Luckily for the endeavor, administrative assistant Amy Smith and senior secretary Rachel De La Cruz were more than up to the job. In recognition of their essential contributions to making the merger a success, as well as their ongoing exemplary service, the team won the 2018 Classified Staff Team Award. Smith and De La Cruz received enthusiastic nominations from faculty, administrators and graduate students. They were honored at the annual Classified Staff Council spring reception May 16. The two will share a $1,500 award and their names will be displayed on a commemorative plaque in the Bowen-Thompson Student Union.

Working as the sole staff under a new chair, and while also performing their regular jobs, Smith and De La Cruz facilitated the creation of one of the largest and most complex units on campus, abbreviated appropriately as WRLD.

“The merger is a project that involves the completion of so many smaller projects that ‘above and beyond’ does not begin to describe the work the two have accomplished,” wrote new chair Dr. Philip Peek, referring to the award criteria. “The attitude that they bring to work is priceless, inviting and infectious, helping to promote and establish a culture that puts collaboration and community first. In my new role as chair, they are a delight to work with. Without them I cannot begin to learn the curve that I must in order to perform my duties.”

After the visualization of the new unit was developed, first came the complicated physical merging of the two departments, beginning in summer 2017 and involving everything from renovating, repurposing and rearranging 29 offices and other work spaces for about 60 faculty, adjuncts and graduate students, to rebranding signage, hallway displays, letterhead and web pages and making sure all the required technology was in place.

“The result has been a collective, welcoming space designed for collaboration and productivity, overseen by a staff with friendly faces, cheerful emails, individualized birthday wishes and a never-ending supply of power snacks,” wrote Drs. Cynthia Ducar, Nathan Richardson and Amy Robinson.

As summer progressed, while fulfilling all their regular but now much enlarged opening-of-the-academic-year tasks (including scheduling nine languages and about 160 classes), they also reorganized scholarships and budgets and integrated policies and procedures.

In fall 2017 they took a leading role in merging the cultures of the two units.

“One of the biggest challenges is helping to create a new WRLD community,” Ducar, Richardson and Robinson wrote. “Rachel and Amy have been instrumental in these efforts. Together, and in collaboration with department-wide initiatives to bring people together, they have organized soup socials, pizza parties, holiday festivities, birthday celebrations and more. They truly try to create a sense of community.”

People from other units in Shatzel Hall, including the School of Cultural and Critical Studies and philosophy, also get involved in these events. “The WRLD staff has brought together faculty and students from the newly merged units, but also positioned the WRLD to being vibrancy and collaboration to many interconnected students who can feel connected and valued.”

As graduate students Claudia Garcia and Michael Marzian wrote, both Smith and De La Cruz “go beyond their work responsibilities by being motivational and inspiring role models.”