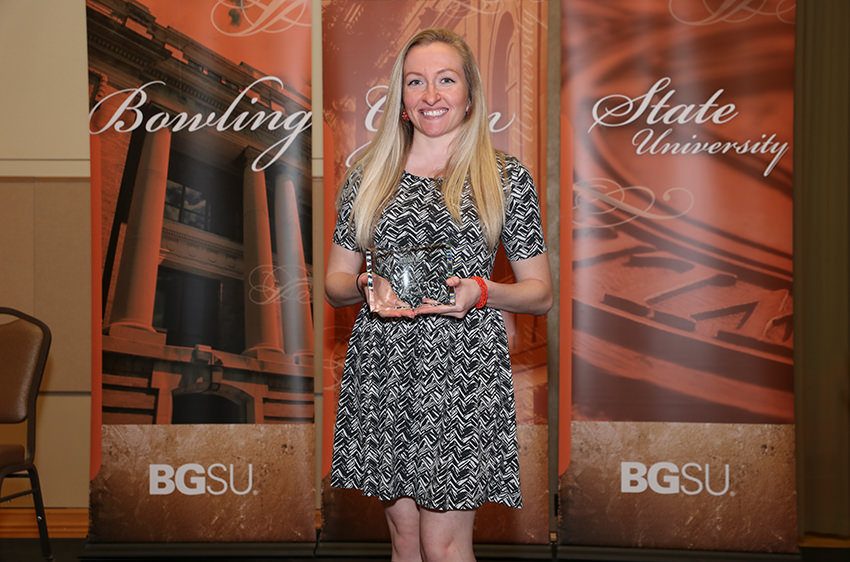 Rookie of the Year Sara Thompson

Sara Thompson, assistant director of annual giving, is this year’s winner of the Administrative Staff Council Rookie of the Year Award. Presented to an employee who has been with the University from one to three years, it recognizes a staff member who has played a key role in implementing a new idea, program or procedure designed to enhance student recruitment, retention or engagement.

Thompson works to build important relationships with alumni, friends and external partners, raising money to enhance the student experience through scholarships and academic programs. She joined the alumni and annual giving team in University Advancement in February 2017.

“Because of her eagerness to learn and work hard, she immediately contributed to the success of our work and continues to do so today,” said Jenny Winsenk, director of alumni relations and annual giving.

Among Thompson’s responsibilities are BGSU One Day, the University’s day of giving, and Falcon Funded, its crowdfunding platform. Both are aimed at increasing the number of BGSU donors, which in turn boosts both the alumni participation rate and the U.S. News and World Report rankings.

Even though Thompson had only been in her job about a month in 2017 before BGSU One Day, “she quickly learned the platform and contributed to its amazing success,” Wensink said. This year she took on the role of subject area expert for the day and helped raise more than $700,000 from 2,700 donors in two, 36-hour events.

She was the student philanthropy director both years and came up with the idea of promoting #OneDay500, which asks students to share on social media how they would spend $500 toward a BGSU cause. The project prompts students to think about how BGSU philanthropy impacts them and changes the culture of giving.

Since Falcon Funded began in 2015, it has raised more than $340,000 in support of student, faculty and staff projects.

Since taking over management of the event, Thompson has explored new ways to utilize social media to promote projects, created projects around high engagement areas such as homecoming and improved the Falcon Funded website to make it more visually appealing and easier to use. Since last July, Falcon Funded is 188 percent ahead in dollars and 148 percent ahead in donors.

Both Falcon Funded and BGSU One Day impact students beyond just rankings, Wensink said. Many of the ideas are initiative by students seeking support for their respective organizations.

In addition to her advancement responsibilities, Thompson has a “dedicated passion for improving food insecurity among BGSU students and goes out of her way to raise money and support.”

“She is a consummate professional with a strong work ethic and a force of positivity in the office and the world,” Wensink concluded.