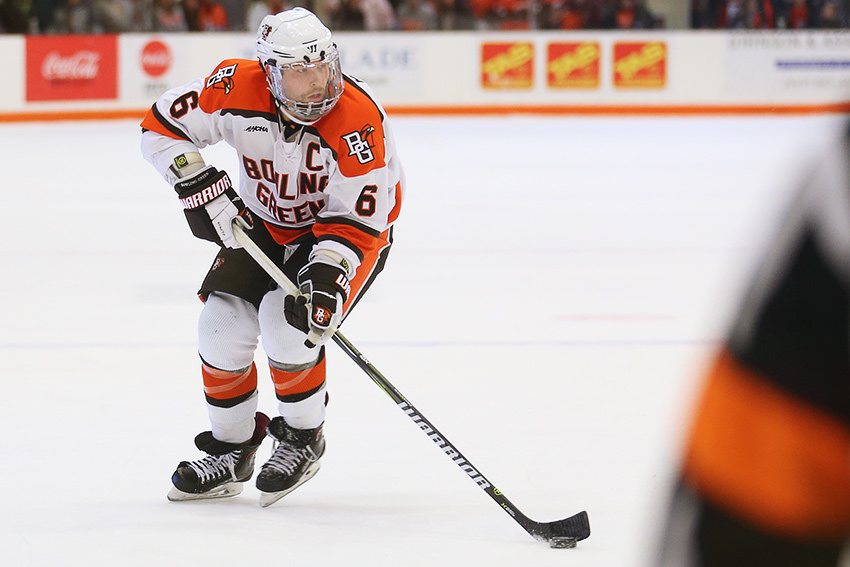 The Falcons are 11-3 since Jan. 1, and are primed for the WCHA playoffs as they enter their final weekend series of the regular season.
Tweet

Heading into the final series of the regular season, the Bowling Green State University hockey team (19-9-6 overall, 16-5-5 in the WCHA) already has clinched at least a No. 3 seed for the WCHA playoffs against an opponent yet to be determined.

If everything falls into place in the Falcons’ favor, it’s possible they could be the second seed, but coach Chris Bergeron is focused on the task at hand: the University of Alabama in Huntsville.

“I’m expecting a team fighting for a playoff spot because if you look at the standings, it’s tight,” he said. “We’re going to face a team that’s hungry. They’ve been off, so they’re rested and it’s going to be their senior weekend. Taking all of that into account, they’re going to be fired up, and our group is going to have to be ready to respond to that.”

The Falcons have gone 11-3 since January 1, and there are several key factors driving their strong finish to the regular season.

Senior forward Mitch McLain, who leads the team in goals scored with 14, has collected 14 points in the last 13 games. Freshman Max Johnson is hitting his stride as he has scored a goal in six of the last nine games.

BGSU is undefeated when scoring four or more goals (11-0-0) and also when leading after two periods (14-0-4). Other notable records include a 14-1-5 mark when the Falcons score first and an 11-1-2 record they hold their opponent scoreless on the power play.

Sophomore defenseman Alec Rauhauser leads the team in assists (26) and points (33). BGSU also has had stellar play in goal with sophomore Ryan Bednard compiling a 15-8-4 record with a .904 save percentage and freshman Eric Dop going 8-4-2 with a .901 save percentage.

Tickets can be purchased online, by calling 419-372-0000 during regular business hours or in person at the Stroh Center ticket office.