Taking it to the top 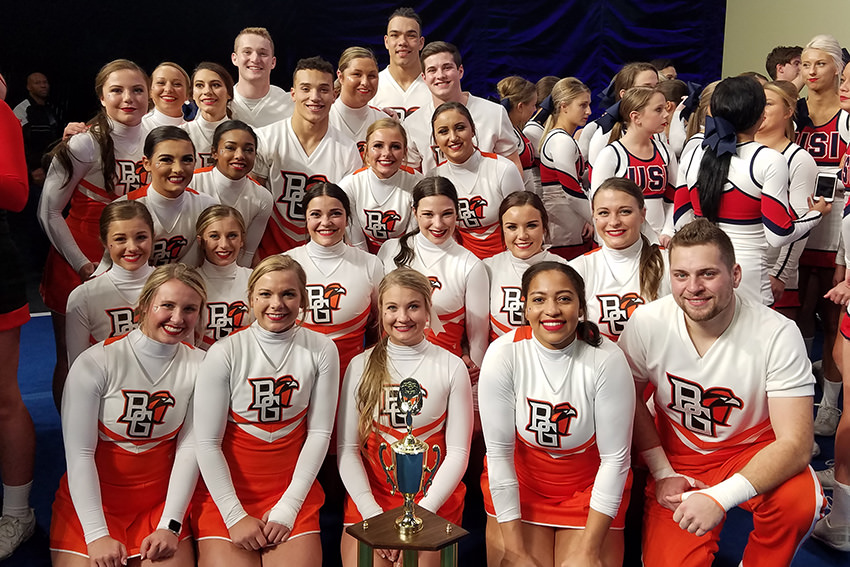 Once again, the Bowling Green State University Spirit Program has returned victorious from national championships. The weekend of Jan. 13-14, both the Cheerleading Team and Dance Team competed at the Universal Cheer Association and Universal Dance Association National Championships. The competition is held at the ESPN Wide World of Sports complex in Orlando, Florida.

The BGSU Cheerleading Team competed that Saturday in the Small Coed D1 Division, placing fifth in the nation. This is the ninth consecutive year that the team has placed within the top five teams nationally. On Sunday, the team competed again, placing second in the University World Cup Championship, less than a point away from first place.

The Dance Team competed in the D1A Jazz Division among other top programs in the country such as Kentucky and Minnesota, finishing in the top 20.

“I believe it’s the dedication these athletes have that has enabled them to be so successful,” said Tyler Strom, head coach of the BGSU Spirit Program and coach of the cheerleaders. “While other students go home for winter break, the cheer team and the dance team stay here and work eight hours a day on their routines. They put in the hard work and it pays off at nationals.”

In addition to the 16 members of the cheer team and 14 on the dance team, 23 members in all stayed to practice because they are needed as alternates in case a member is injured and to spot and encourage teammates at the competition, Strom said.

“They are super beneficial and a huge part of it,” he said.

The BGSU Spirit Program has competed in the championships since 2010. After being on the BGSU cheer team as a student majoring in sport management, Strom, a 2013 graduate, returned as program director last August. “It was interesting being on the other side of the line at nationals,” he said.

Meanwhile, following the competition, the spirit teams continue to support the BGSU basketball team, and in April will hold tryouts for next year.

Thanks to a large number of juniors in the program this year, the cheer team and dance team will each lose only four members to graduation so will maintain consistency.

Tryouts for next year’s squads are in April, followed by a retreat in June in which Dance Team Coach Miranda Calhoun and Strom teach the teams the new routines they have choreographed and all the BGSU traditions such as the fight song. Each year there are new moves to master and innovative skills to learn.

The program members also go to a camp in Wisconsin during the summer, followed by football season in the fall.