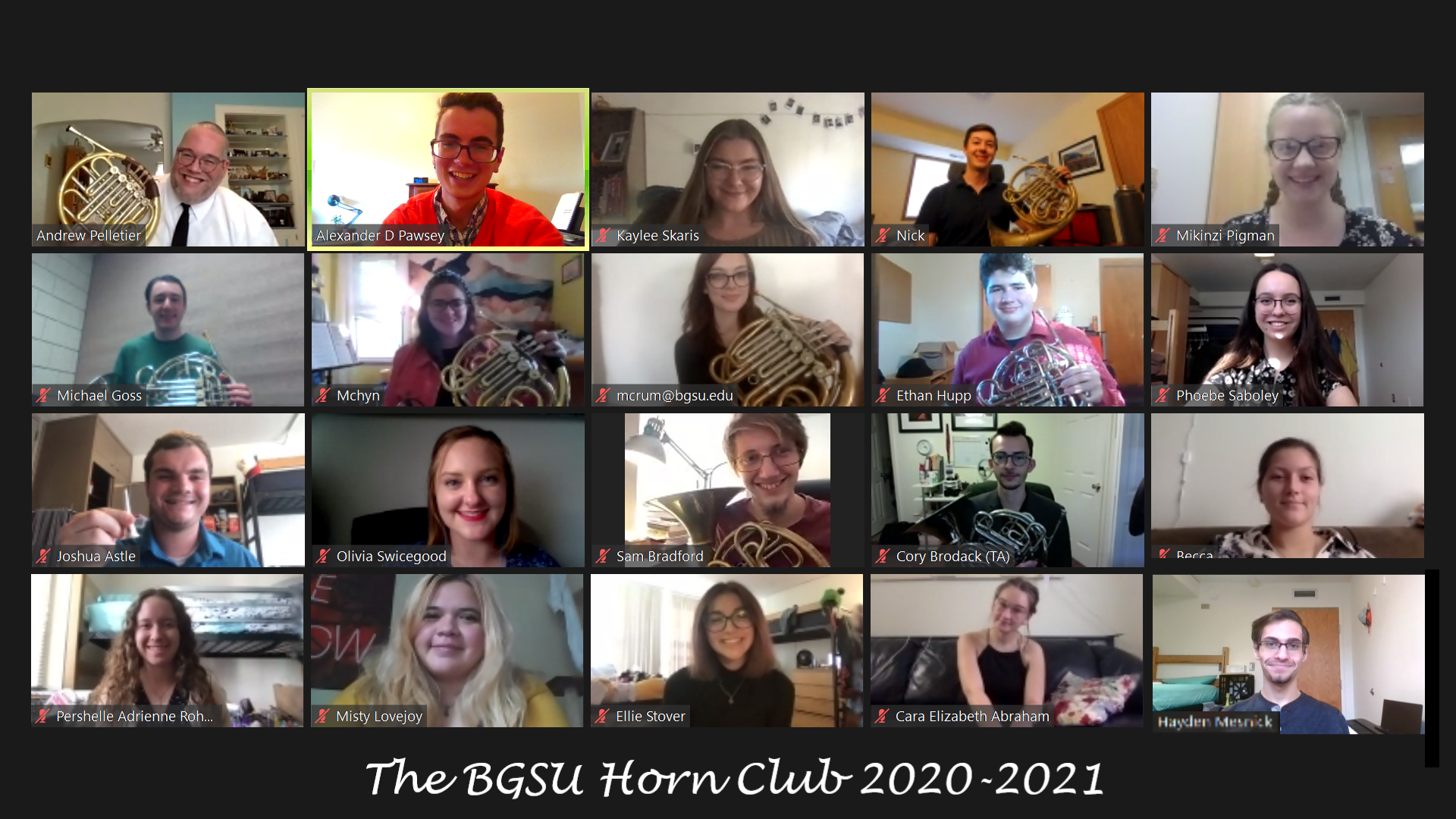 Dr. Pelletier and most members of the Horn Club are featured here: a collage made through the Zoom videocalling tool.

[Dr. Pelletier] "Thank you all very much. We are the BGSU Horn Club, a large horn ensemble from Bowling Green State University in Northwest Ohio. And um, this being our fiftieth International Horn Society I wanted to present some music that has its roots the past and also some music to look forward. So we began with a suite by Roger Johnson written in 1960 for the Los Angeles Horn Club- partly founded by my mentor Jim Decker, and kind of the initial large ensemble which gave people the idea of perhaps creating something like the IHS. It's a dear piece to me- I absolutely adore that piece. Next, we have the Faust Meditation. I have to admit I am unabashedly a Randy Faust fan. He has been a huge influence on me both professionally and personally for many many years. And this year, he retired from academic life after several long decades this happened. And so I wanted to do something to honor him and all that he has done for all of us across the world who play the horn, teach the horn, love the horn, who sing melodies through the horn. So enjoy Meditation by Randy Faust." 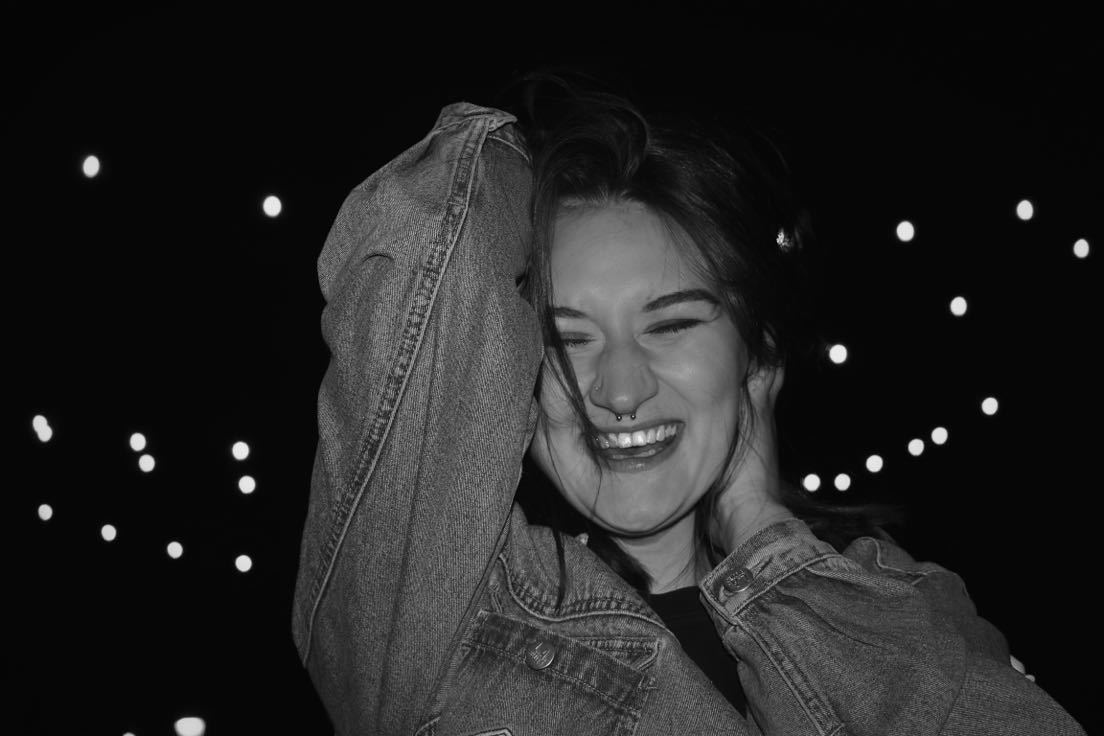 Hi! My name is Cara Abraham. I am a second year Music Education major at BGSU. My career goals include working as an equal rights activist and music teacher in inner city schools. A fun fact about me is that I am also the president of an activist organization called FORGE (Feminist Organization Rallying for Gender Equity) at BGSU! 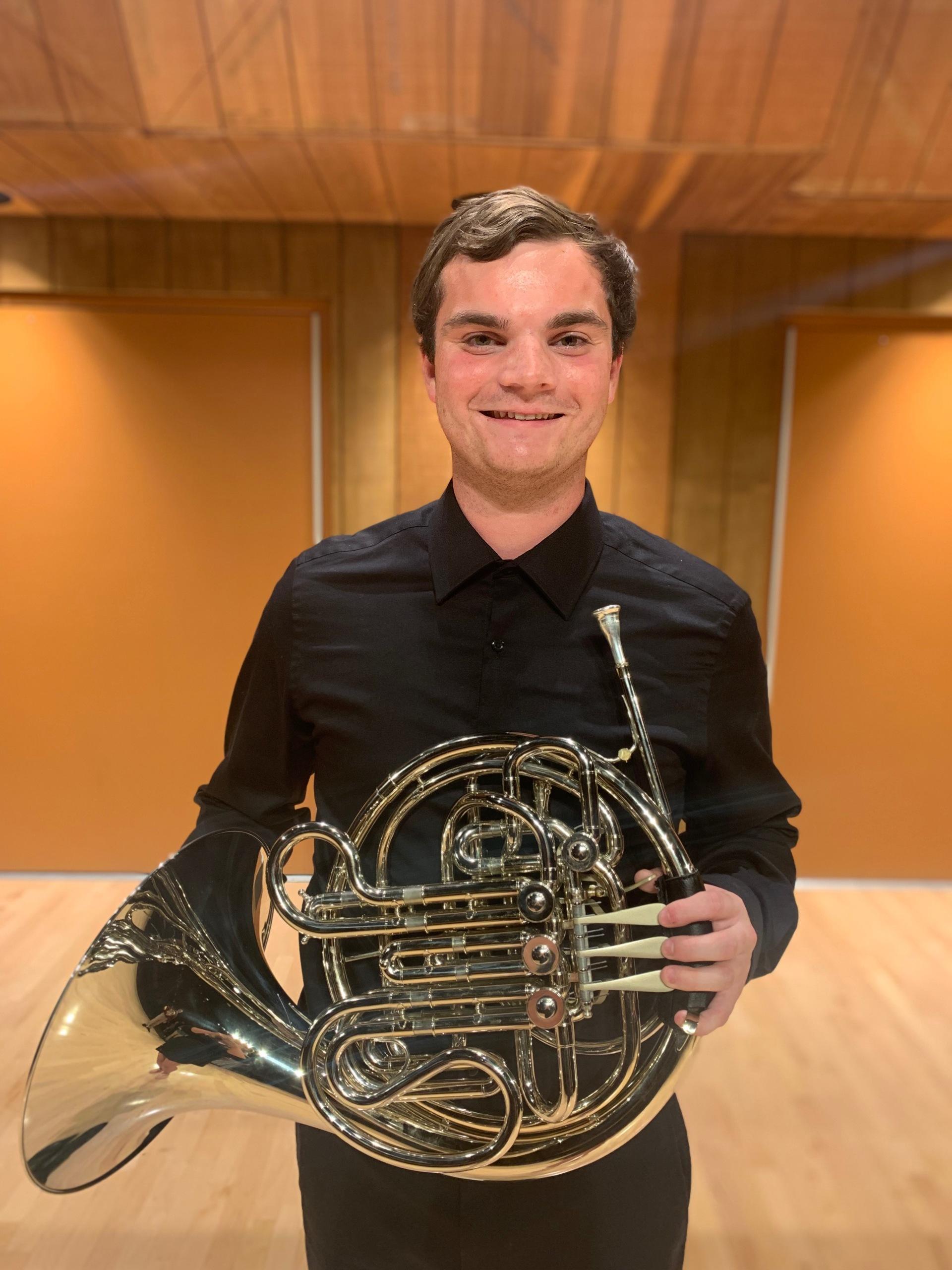 Hello! I'm Joshua Astle and I'm a music education major in my sophomore year! A couple fun facts about myself is that I love watching hockey, specifically the Columbus Blue Jackets. 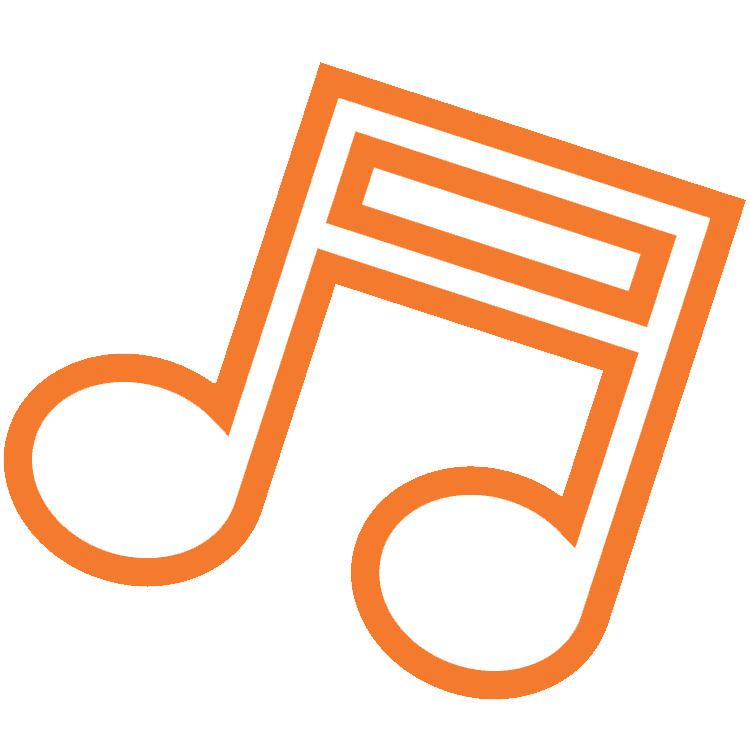 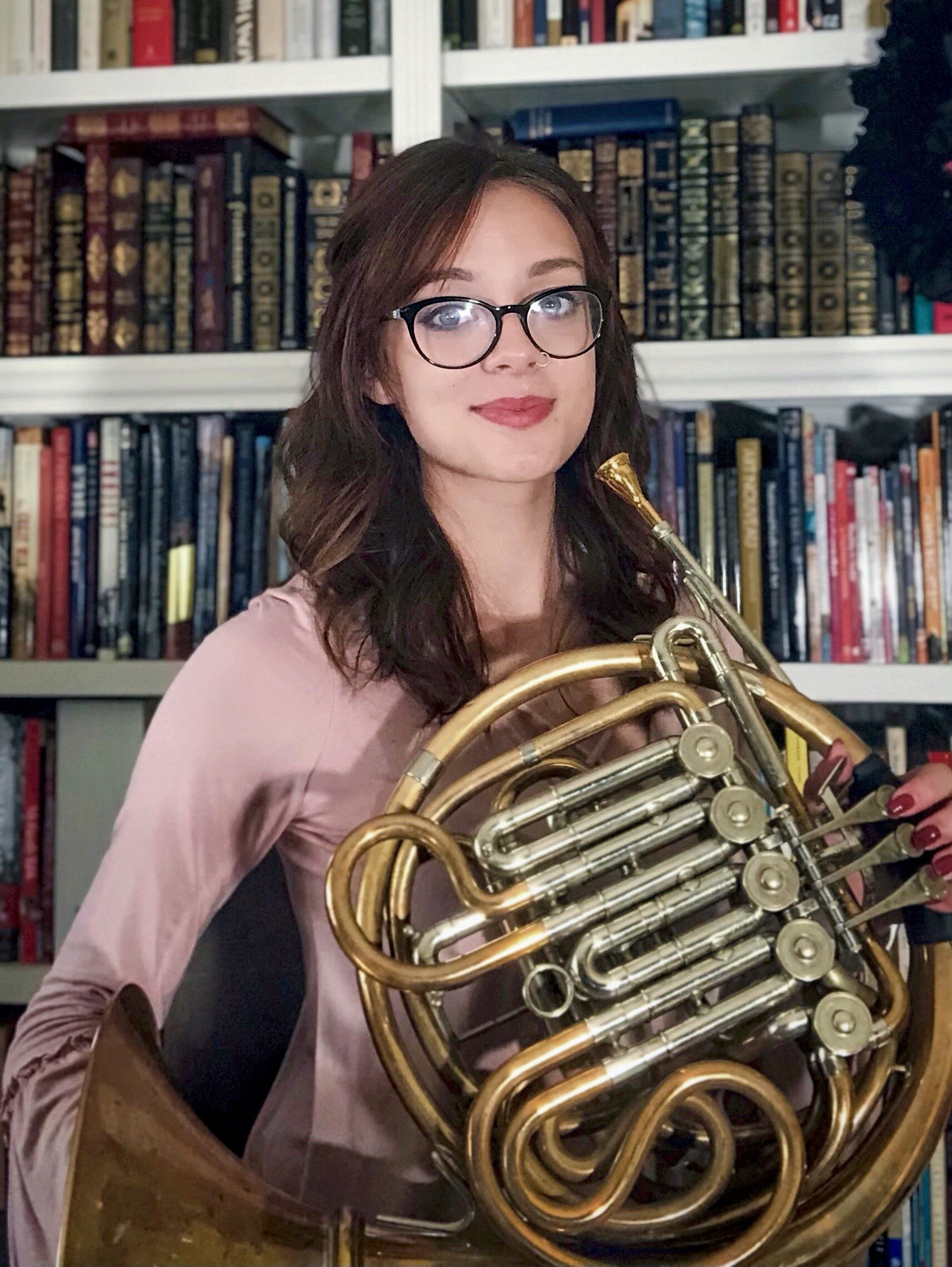 Hi, my name is Morgan Crum! I am a third year Bachelor of Musical Arts Major with a Minor in Psychology. A fun fact about me is that I was born on leap day! 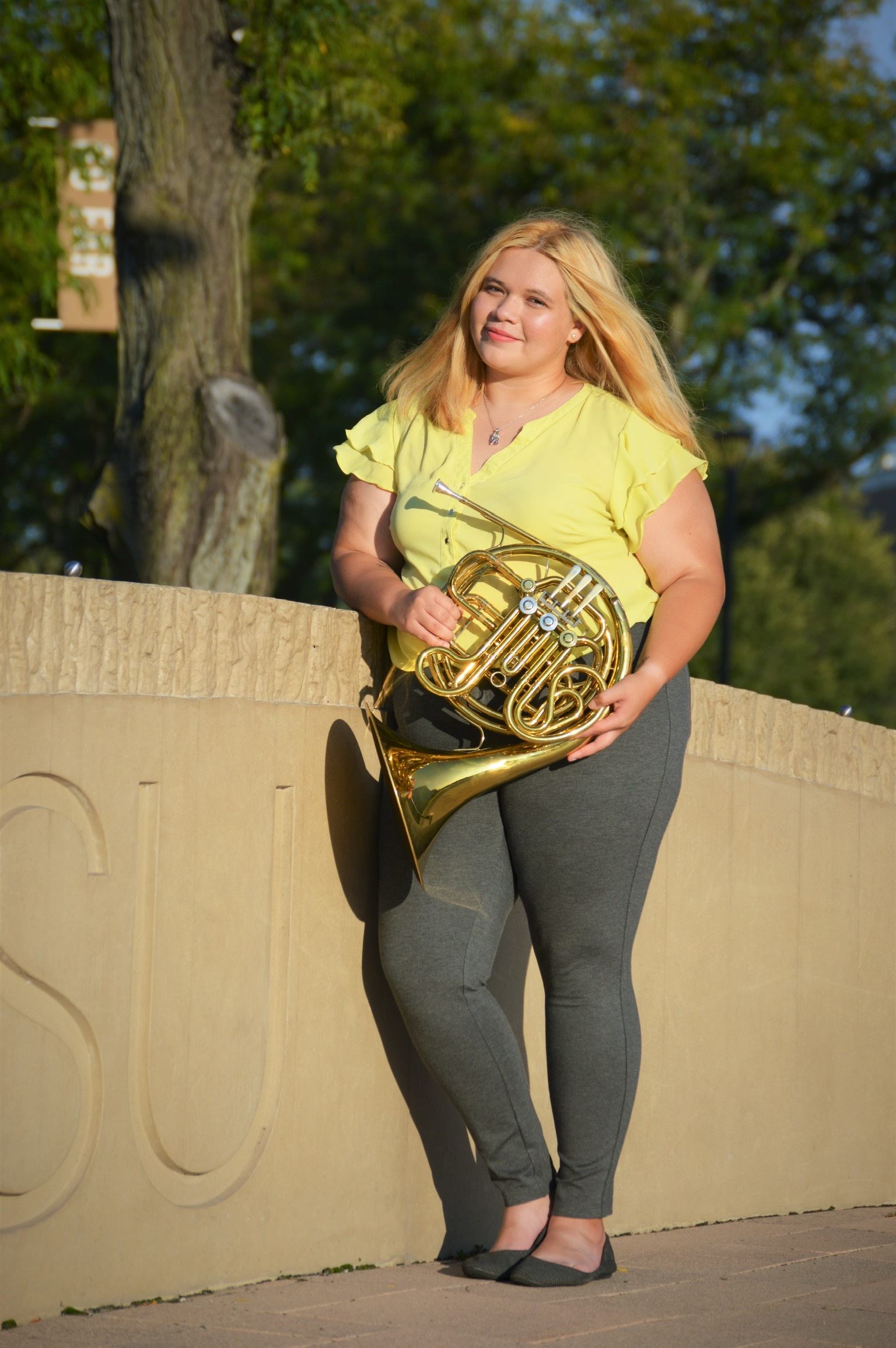 My name is Misty Lovejoy and I’m majoring in Musical Arts with a minor in nonprofit administration. A fun fact about me is that I am a first generation college student! 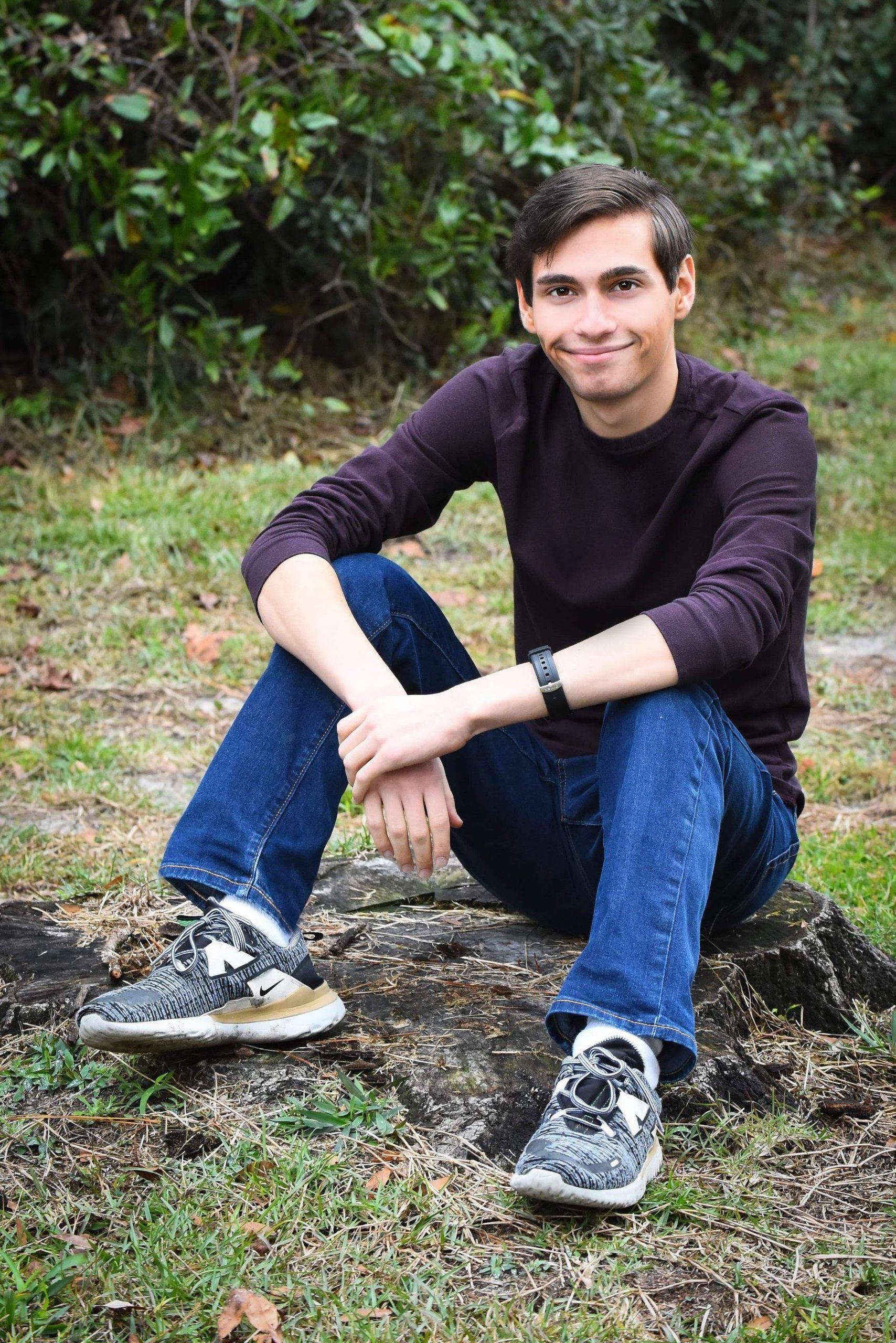 Hi! I'm Hayden Mesnick, a first year music composition major, pianist, and hornist. Fun fact: when I sleep, I like to listen to 4'33" by John Cage. 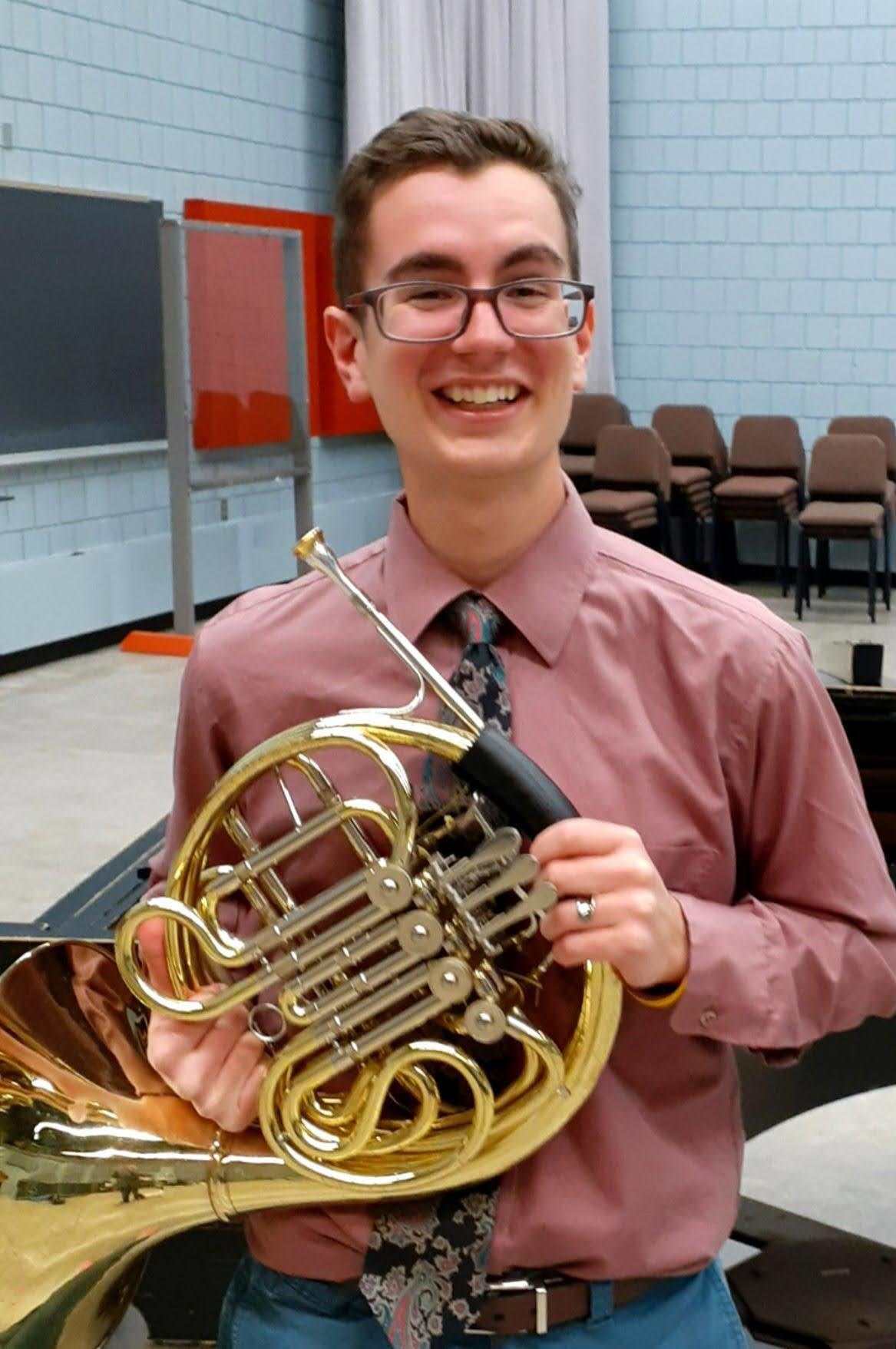 Greetings! My name is Alex Pawsey, and I am a 3rd year Music Education major in the studio. My secondary instrument is bassoon. Fun fact? Only if you think juggling is fun!! 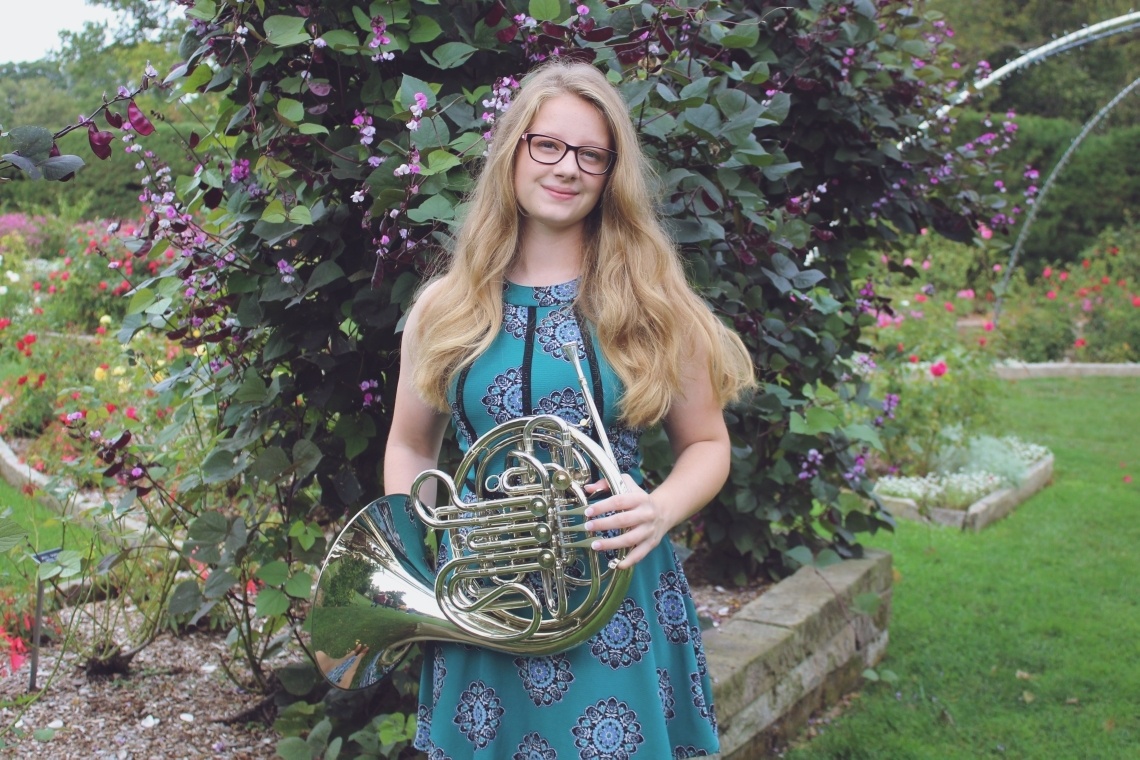 My name is Mikinzi Pigman and my major is music education. I originally started on trumpet and switched to horn late my seventh grade year. A fun fact about me is that I love to paint and I especially love to follow Bob Ross tutorials. Even though I recreate his paintings very poorly, I still have fun doing it. 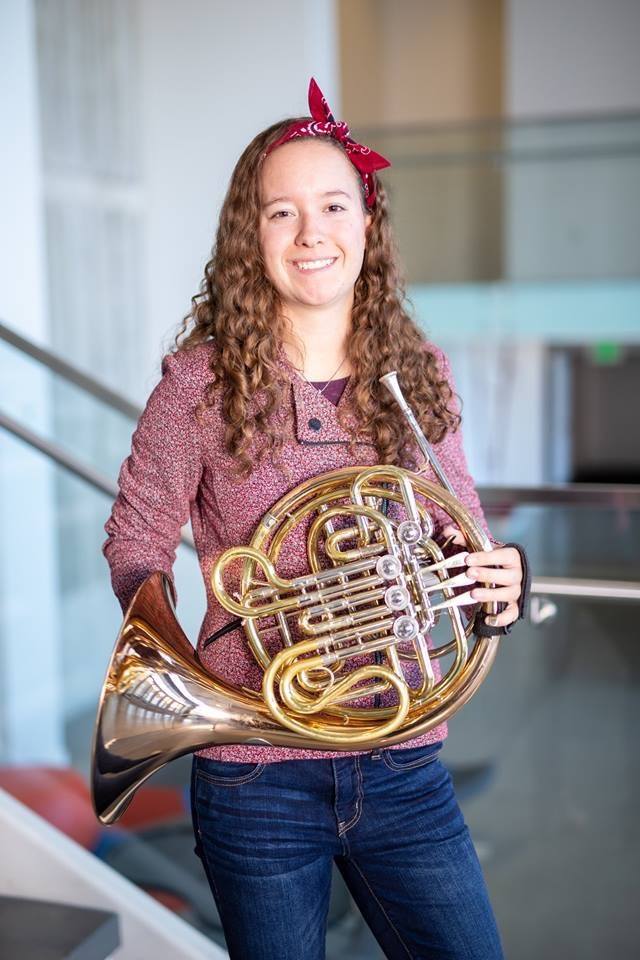 My name is Pershelle Rohrer, and I am a second-year sport management major with a minor in journalism. I am originally from Utah, but I have deep family ties to BGSU. A fun fact about me is that I attended Super Bowl LIV in Miami, Florida. 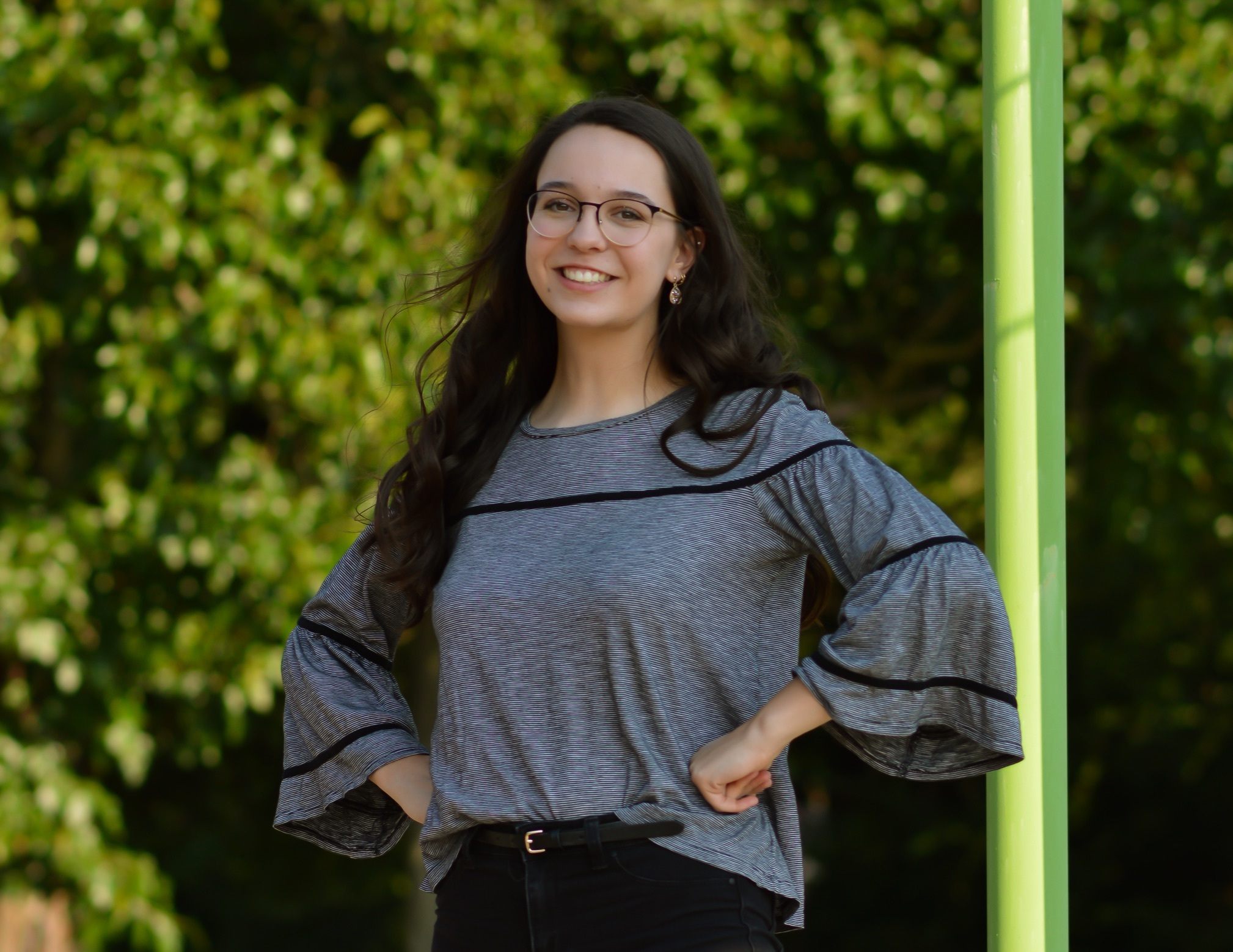 My name is Phoebe Saboley and I’m a first year music education major!! A fun fact about me is that I’ve read Vergil’s “Aeneid” in the original latin text! 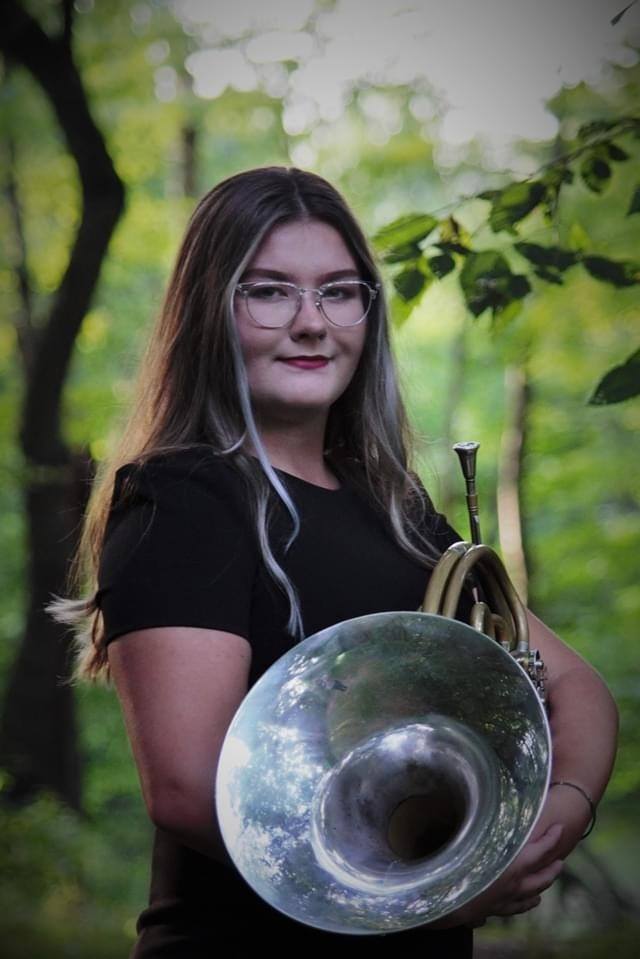 My name is Kaylee Skaris and I’m a second year music performance major! A fun fact about me is that I went to Ireland on a band trip in Highschool! 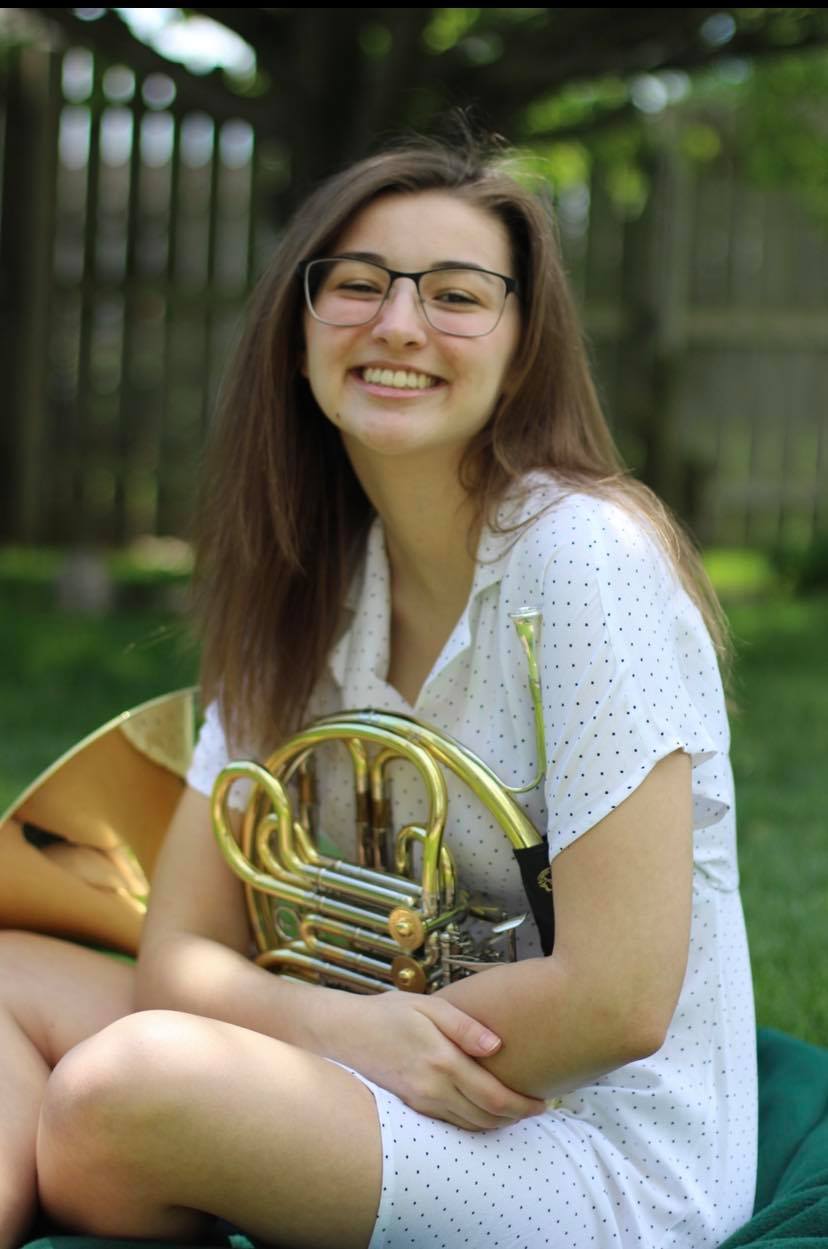 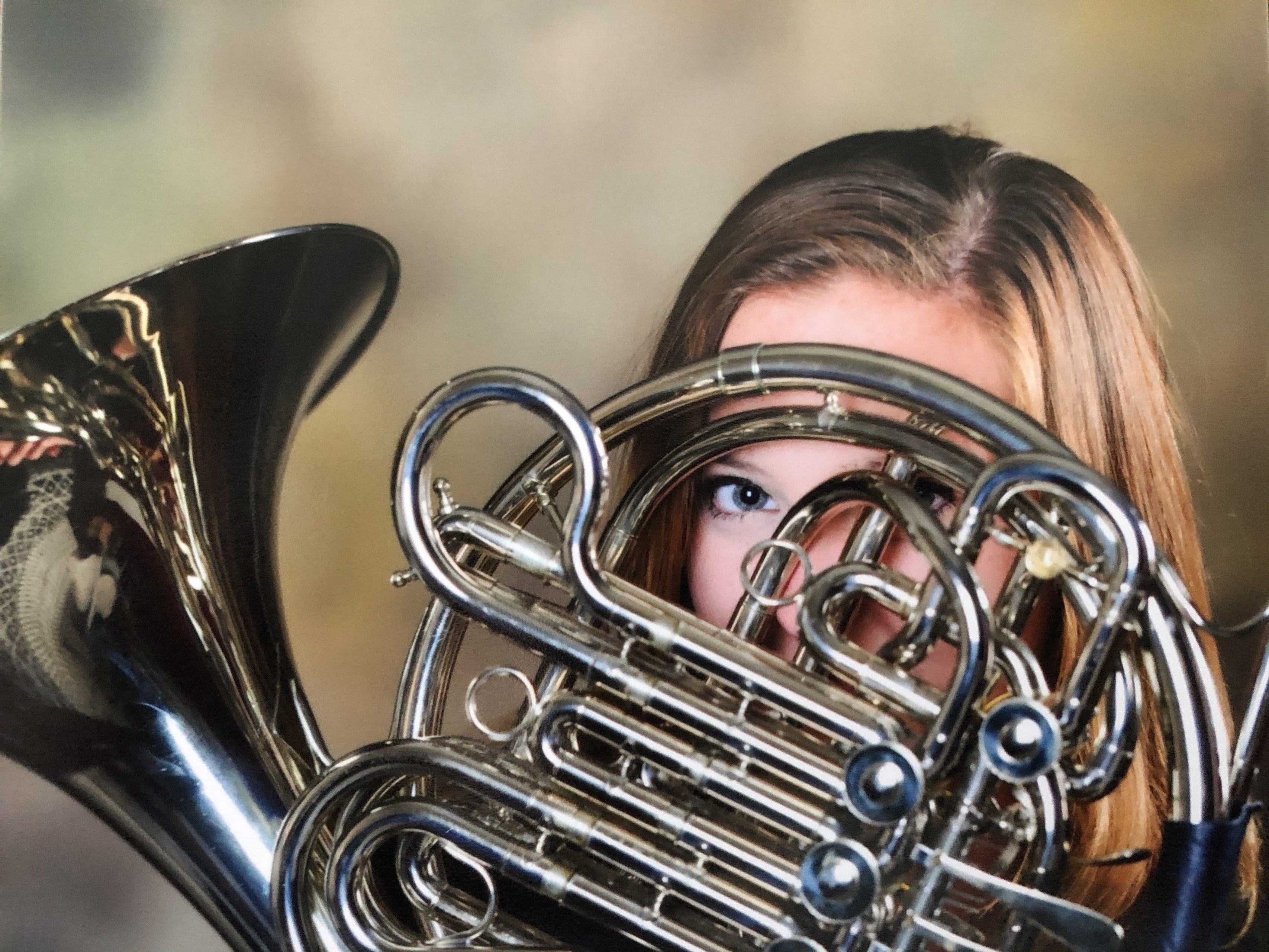 Hi! My name is Olivia Swicegood. I am a freshman at BGSU studying Music Education. Eventually, I hope to double major in Instrumental and Choral Music Education. A fun fact about me is that I am a huge musical theatre fan! 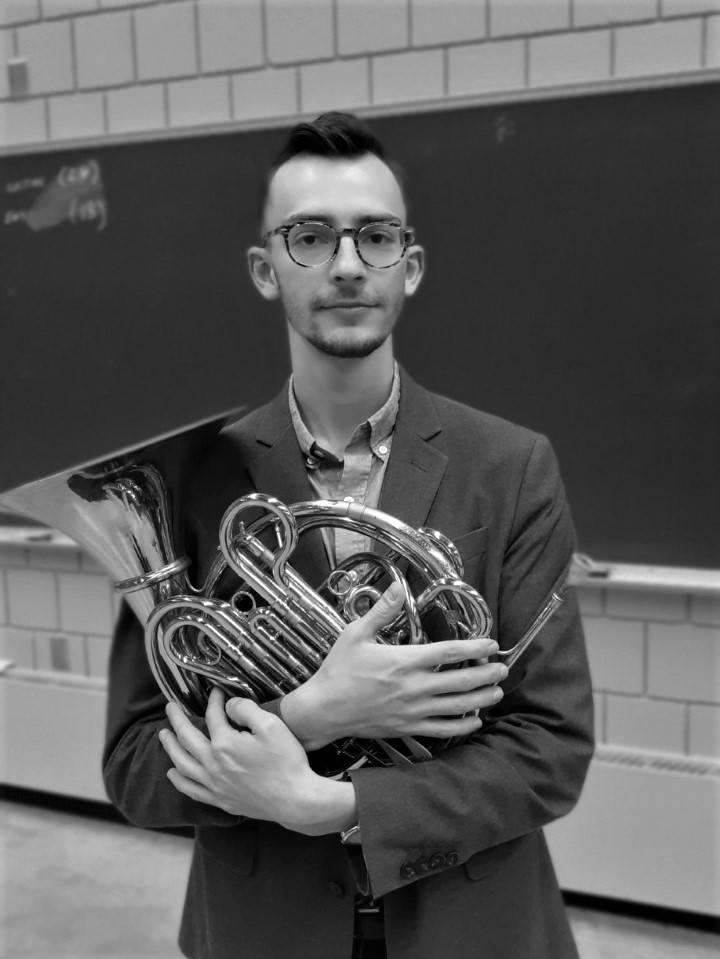 Cory Brodack’s music is inspired by aspects of the human condition, with an emphasis on rich timbre, harmony, shifting rhythm, combining textures and gestures in creative ways, and the exploitation of musical decisions and choice. His awards include the ASCAP Nissim Prize, an honorable mention in the American Prize, and ECU's Orchestra Composition Competition. Performers of his music include the Rhythm Method String Quartet, Hypercube, Icarus Quartet, Andrew Pelletier, David Bohn, Daniel Anastasio, and the Metropolitan Orchestra of St. Louis. He earned his bachelor's from SIUE, and is currently pursuing his masters studies in composition at BGSU. 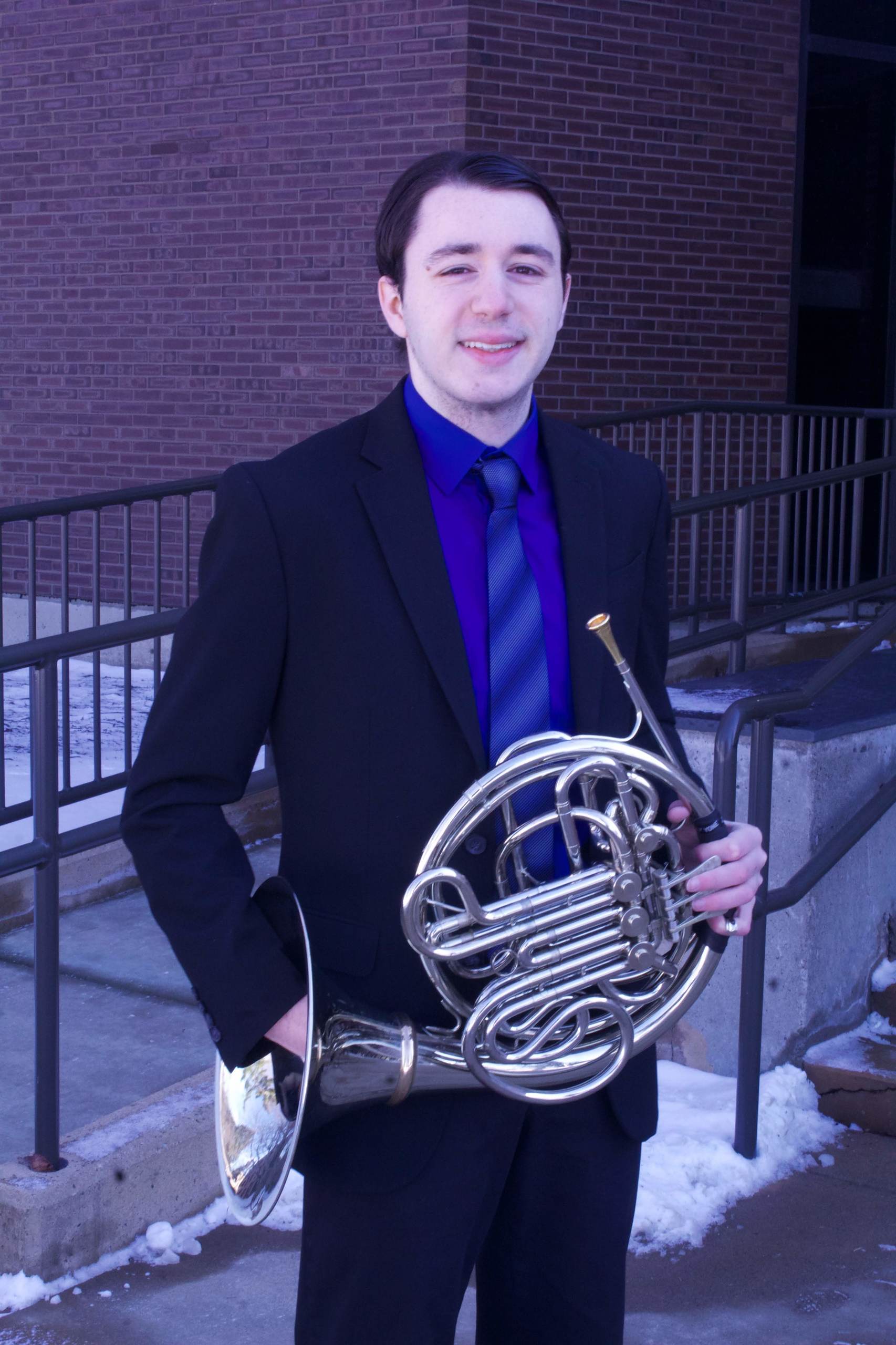 Michael Goss is a first-year graduate student pursuing his Master's degree in Horn Performance at BGSU. He also serve as the teaching assistant for the BGSU horn studio and as the hornist in the BGSU Graduate Brass Quintet. He received his Bachelor's degree in Horn Performance from SUNY Fredonia, and is originally from the Buffalo, New York area. Fun fact: "I love arranging music, and I put these skills to use in my summer job as the staff arranger for my local community band, which is directed by my father!" 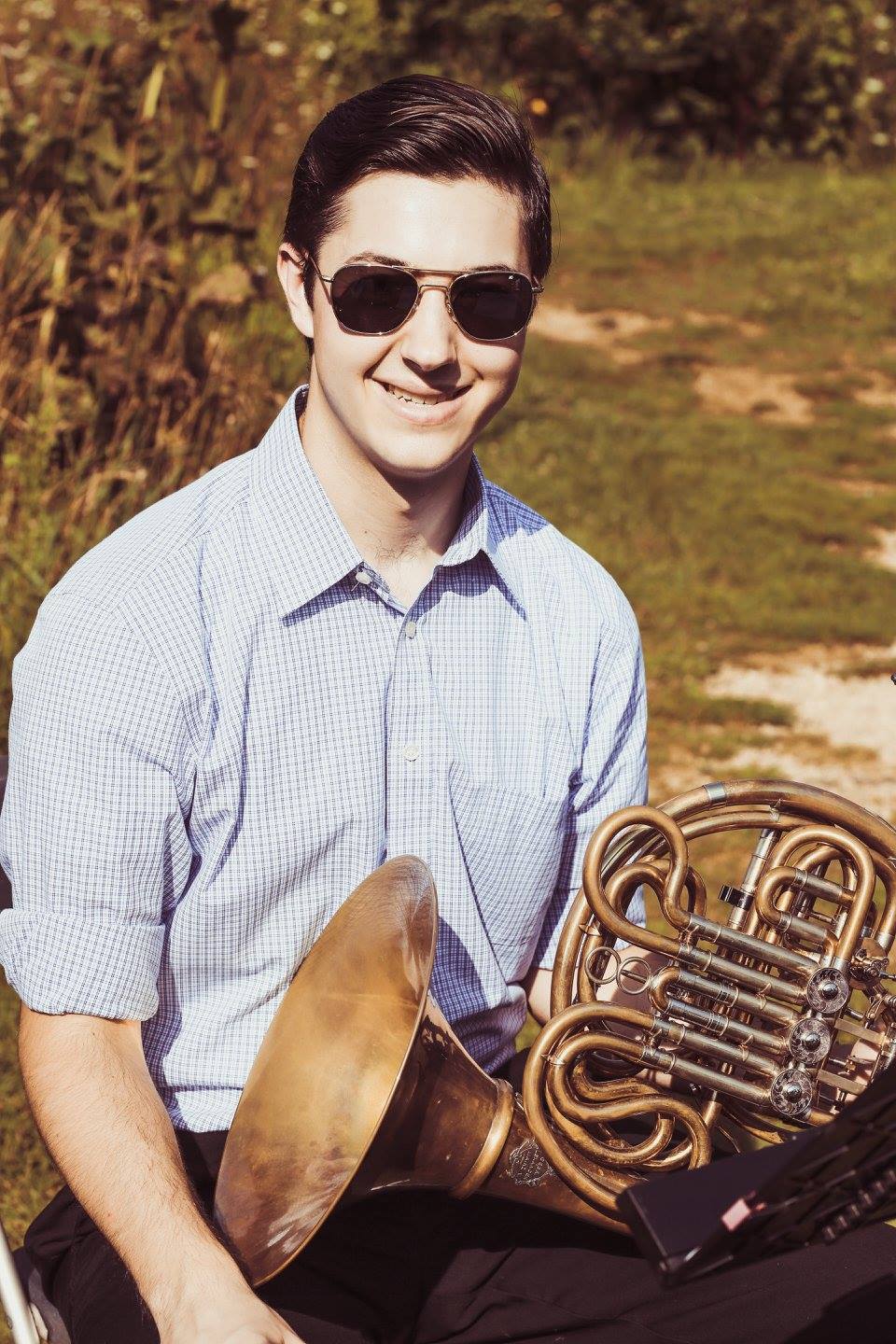 Nick Buroker is in his second year of study pursuing a Master of Music in Horn Performance at BGSU. Originally from La Crosse, Wisconsin, he earned a Bachelor of Music from the University of Wisconsin-Madison. When he is not practicing, he can be found riding his road bike. 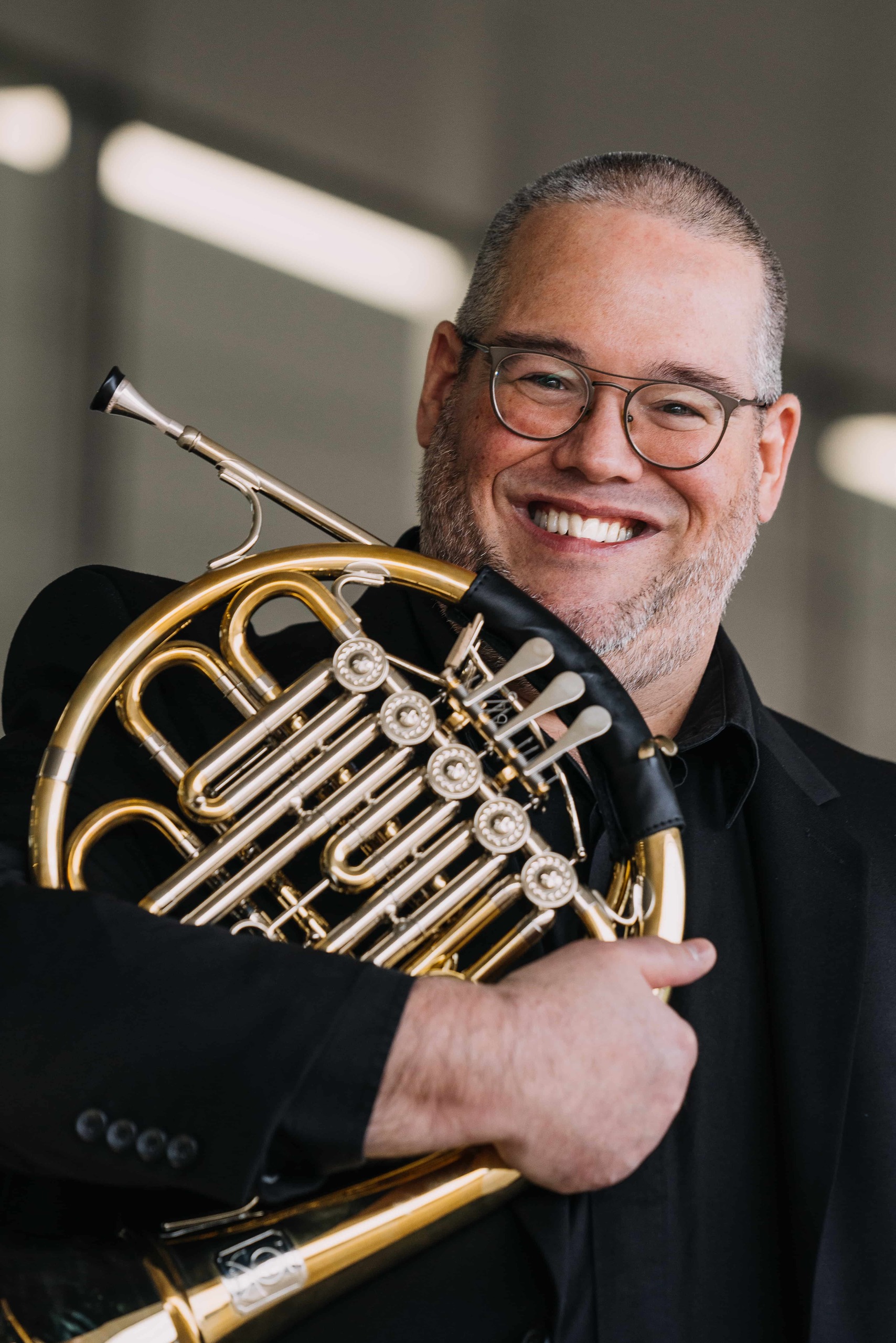 Internationally active horn soloist, Grammy Award winning chamber musician, and masterclass clinician, Andrew Pelletier enjoys an extremely busy life of solo playing, orchestral performance, and mentoring developing musicians. President of the International Horn Society, John Henken of the Los Angeles Times wrote, “gleaming, handsome playing. Pelletier is a soloist who seems capable of anything on his instrument.” Fanfare Magazine called him “Phenomenal…undeniably in tune with what he plays” and the American Record Guide has praised his “full sound and playing with authority and imagination.” The First Prize winner of the 1997 and 2001 American Horn Competition (America’s only internationally recognized competition for the horn), he has appeared as a Featured Artist at the International Horn Society Annual Symposia of 2009 and 2014, and has appeared as a solo artist at the Symposia of 1997, 2003, 2005, 2013, 2016, 2017, 2018, and 2019. He is in regular demand for artistic residencies and clinics at universities and music schools, and these solo tours have taken him to 30 US states, Australia, Belgium, Brazil, Canada, China, England, and Mexico.

As a chamber musician, he performs with Southwest Chamber Music in California (with whom he won the 2005 Grammy award for Best Classical Recording, Small Ensemble), the Motor City Brass Quintet in Detroit, and has performed with the Empire Brass Quintet, Detroit Chamber Winds and Strings, and with Chamber Music at the Scarab Club, Detroit. As an orchestral performer, he is the principal horn of the Michigan Opera Theatre at the historic Detroit Opera House, and has performed as guest principal horn for the Los Angeles Philharmonic (under Music Director Gustavo Dudamel), the Detroit Symphony, the Toledo Symphony and Toledo Opera, ProMusica Chamber Orchestra of Columbus, and the Windsor (Canada) Symphony. He is the former principal horn for the Ann Arbor Symphony, Santa Barbara Symphony, Ann Arbor Ballet Theatre, Columbus Bach Ensemble, Long Beach Camerata, Maine Chamber Ensemble, and Portland (Maine) Ballet. He has also performed with the New West Symphony, Portland (Maine) Symphony Orchestra, and is a founding member of the Portland Opera Repertory Theatre. He spent almost a decade as an active free-lance performer in Los Angeles and can be heard on film soundtracks as Battle: Los Angeles, Your Highness, Lethal Weapon 4, The X-Men, Frequency and TV movies for Lifetime TV and the SiFi Channel.

A Lifetime member of the International Horn Society and the British Horn Society, he is dedicated to service to the horn community, and has served the International Horn Society in a variety of ways over the years: Advisory Council member, Coordinator of Scholarship Programs, member of the Digital E-Newsletter committee, and Ohio Regional Coordinator. His pedagogical articles have been published by the International Horn Society, the Norwegian Horn Society, the New England Horn Society, the Texas Bandmaster’s Association, and the New York Brass Conference. He holds a B.M. degree, Summa Cum Laude, from the University of Southern Maine, and an M.M. and the D.M.A (voted Outstanding Graduate of the Class for both degrees) from the University of Southern California. His primary mentor was James Decker, with additional studies with John Boden, David Jolley, trumpeter Roy Poper, Michael Thompson and Gail Williams. He has recorded for MSR Classics, Cambria Master Classics, White Pine Records, ToneQuest Recordings, Koch International, and Delos labels. Since 2004, Pelletier is very proud to serve as the Professor of Horn of the College of Musical Arts at Bowling Green State University, in Bowling Green, Ohio, and was named a Professor of Creative Arts Excellence at BGSU in 2020. He has previously taught at the Portland (Maine) Conservatory of Music, Moorpark College, Ventura Community College, and the University of Southern California. Andrew Pelletier plays exclusively on horns by Paxman of London, England, and mouthpieces by PHC London.