The Orchard Guitar Festival was established in 2015 and is made possible through a generous gift by Thomas (’75) and Martha Orchard (’73). A long-time supporter of arts, culture and “all things with six strings”, Thomas is an amateur guitarist and enthusiast. The Festival celebrates the guitar by featuring world-class guitarists as well as education, performance, and community-building opportunities for BGSU students and audiences throughout the region. 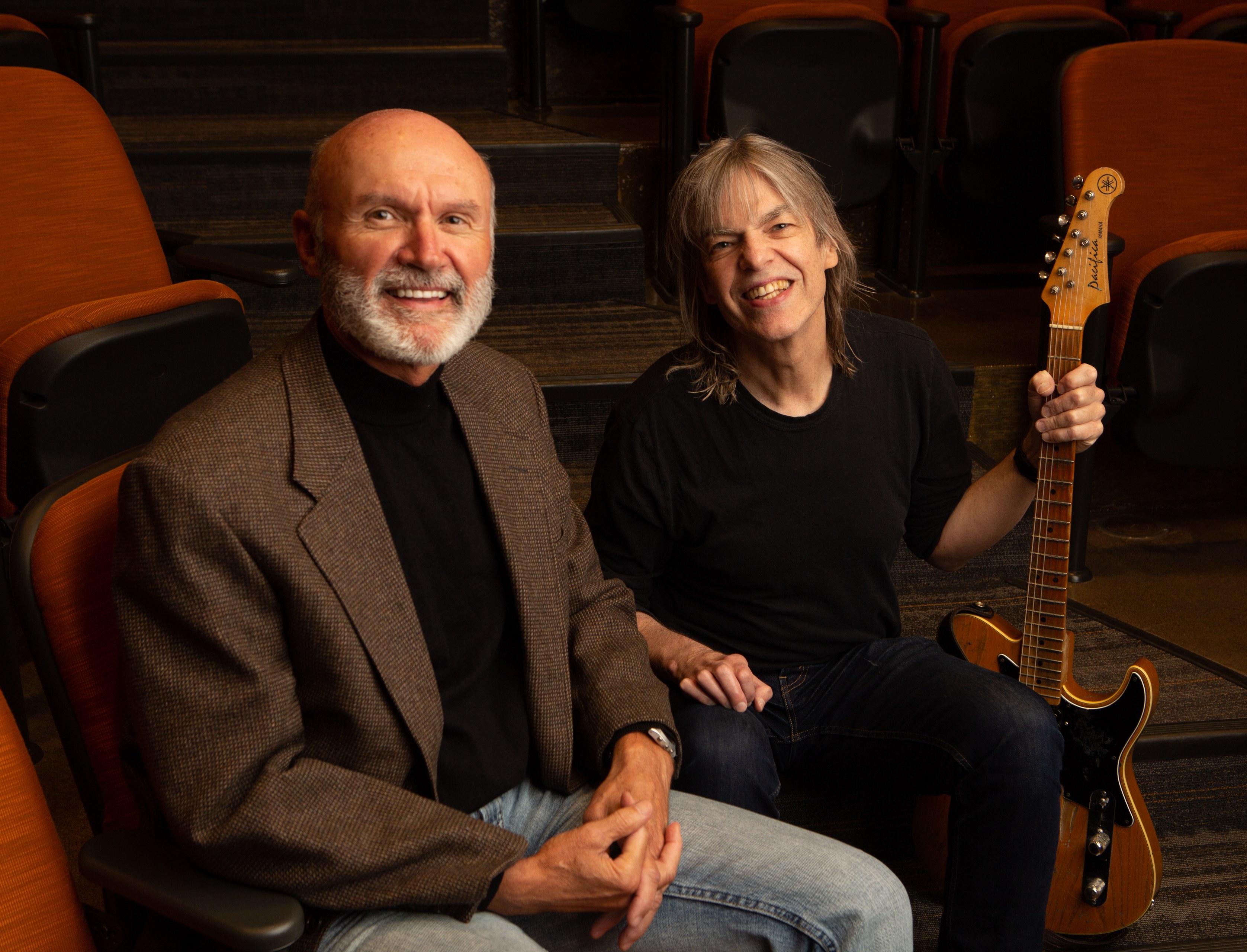 “Kurt Rosenwinkel is a genius - he really is, and Caipi is music to heal the soul”
– Eric Clapton

Kurt Rosenwinkel has been a distinct and prominent creative voice at the forefront of modern music for nearly three decades. The American multi-instrumentalist, composer, and producer has gained international recognition for his deft artistry and unabated individualism since he first appeared on the New York music scene in 1991. His legacy as the pre-eminent jazz guitar voice of his generation is plainly evident on his eleven albums as a leader, each one the inspiration for legions of musicians young and old across the globe. Kurt’s aesthetic vision and multi-genre facility has caught the ear of some of modern music’s most prominent stars; collaborations with Eric Clapton, Q-tip, Gary Burton, Paul Motian, Joe Henderson, Brad Mehldau, and Donald Fagen are but a few highlights from a remarkably diverse and extensive catalog of over 150 sideman recordings. In the winter of 2016, Kurt formed the independent music label Heartcore Records with the focused intention of signing and promoting a new generation of musicians whose exacting standards match his own. Heartcore has also allowed Kurt to flourish in yet another dimension of music making, that of the record producer. He self-produced his eleventh album, 2017’s “Caipi”, and was more recently involved as a producer and guitarist on Brazilian multi-instrumentalist Pedro Martin’s 2019 release “Vox”.

The future looks intensely bright for Rosenwinkel, who is consistently busy as a sideman and leader of several projects. With plans to tour and release new material from his improvising trio Bandit 65, Brazilian rock/fusion band Caipi, and a forthcoming live solo album, this visionary artist doesn’t appear to be slowing down any time soon.

Grammy Award-winning guitarist and composer Bill Frisell has long been hailed as one of America’s most vital and productive performing artists with many celebrated recordings across his 40-year musical career.

In addition to winning the 2004 Grammy Award for Best Contemporary Jazz Album for his album “Unspeakable,” Frisell earned four other nominations between 2003 and 2016.

He was named an inaugural Doris Duke Artist in 2012, and in 2016 he received the first FreshGrass Composition commission to support innovative grassroots music. He is the subject of a new documentary film by director Emma Franz, entitled “Bill Frisell: A Portrait,” which examines his creative process in depth.

A New York Times article said, "Frisell has had a lot of practice putting high concept into a humble package. Long hailed as one of the most distinctive and original improvising guitarists of our time, he has also earned a reputation for teasing out thematic connections with his music.”

Also on the schedule for the guitar festival were Gilad Hekselman, James Marron and Brad Myers.

Gilad Hekselman, born in Israel, arrived in New York in 2004 and has developed a reputation as one of the most promising jazz guitarists in the city’s jazz scene. He has performed with numerous artists including Chris Potter, Eric Harland, Ben Wendel, Gretchen Parlato, Avishai Cohen, Terri Lyne Carrington and Peter Bernstein. His most recent album is “Ask for Chaos,” released in a year ago on his new label Hexophonic Music in collaboration with Motema Music label. He has earned several prestigious awards, including first in the Rising Star category of Downbeat Magazine and winner of the 7 Virtual Jazz Club international competition, both in 2017.

James Marron, a classical guitarist and composer, has established himself through dynamic performances of the latest in contemporary music, as well as insightful interpretation of the classics. He has performed across the U.S., Canada, Europe and Asia, and with such groups as the Cleveland Orchestra, the Manhattan Contemporary Ensemble, and the Oberlin Contemporary Ensemble. His compositions have appeared in film and television.

Composer/guitarist Brad Myers has been playing music since he was 6 years old. After more than 20 years as a much sought-after sideman, Myers released “Prime Numbers,” the first album released on his own label, Colloquy Records. In 2017, he released “Sanguinaria (Hopefulsongs)” with bassist Michael Sharfe, which focuses on the dialogue and interplay between jazz guitar and double bass in duo and trio settings.

Mike Stern is regarded as one of the true guitar greats of his generation. A player of remarkable facility whose searing lines are informed mainly by bebop and the blues while also carrying a rock-tinged intensity, Stern made his mark with Miles Davis in the early ‘80s before launching his solo career in 1985. Since then he has released 17 recordings as a leader, six of which were nominated for GRAMMY® Awards. His latest, Trip, is his first since recovering from a serious accident in the summer of 2016 that left him with two broken arms and nerve damage in his right hand that prevented him from even holding a pick. But Stern is back on top of his game, playing with typical authority and prodigious chops on this all-star outing, which features such longstanding colleagues as trumpeters Randy Brecker and Wallace Roney, saxophonists Bob Franceschini and Bill Evans (a bandmate of Mike’s in Miles Davis’ ‘comeback band’ of 1981), bassists Victor Wooten and Tom Kennedy and drummers Dave Weckl, Dennis Chambers and Lenny White.

One of the greatest guitarists in jazz, Martino had suffered a severe brain aneurysm and underwent surgery after being told that his condition could be terminal. After his operations he could remember almost nothing. He barely recognized his parents. and had no memory of his guitar or his career. He remembers feeling as if he had been “dropped cold, empty, neutral, cleansed, ... naked.”

In the following months. Martino made a remarkable recovery. Through intensive study of his own historic recordings, and with the help of computer technology, Pat managed to reverse his memory loss and return to form on his instrument. His past recordings eventually became “an old friend, a spiritual experience which remained beautiful and honest.” This recovery fits in perfectly with Pat’s illustrious personal history. Since playing his first notes while still in his pre-teenage years, Martino has been recognized as one of the most exciting and virtuosic guitarists in jazz. With a distinctive, fat sound and gut-wrenching performances, he represents the best not just in jazz, but in music. He embodies thoughtful energy and soul.

Born Pat Azzara in Philadelphia in 1944, Pat was first exposed to jazz through his father, Carmen “Mickey” Azzara, who sang in local clubs and briefly studied guitar with Eddie Lang. He took Pat to all the city’s hot-spots to hear and meet Wes Montgomery and other musical giants. “I have always admired my father and have wanted to impress him. As a result, it forced me to get serious with my creative powers.”

He began playing guitar when he was twelve years old. and left school in tenth grade to devote himself to music. During Visits to his music teacher Dennis Sandole, Pat often ran into another gifted student, John Coltrane, who would treat the youngster to hot chocolate as they talked about music.

Besides first-hand encounters with `Trane and Montgomery, whose album Grooveyard had “an enormous influence” on Martino, he also cites Johnny Smith, a Stan Getz associate, as an early inspiration. “He seemed to me, as a child. to understand everything about music,” Pat recalls.

Martino became actively involved with the early rock scene in Philadelphia, alongside stars like Bobby Rydell, Frankie Avalon and Bobby Darin. His first road gig was with jazz organist Charles Earland, a high school friend. His reputation soon spread among other jazz players, and he was recruited by bandleader Lloyd Price to play hits such as Stagger Lee on-stage with musicians like Slide Hampton and Red Holloway.

Martino moved to Harlem to immerse himself in the “soul jazz” played by Willis “Gatortail” Jackson and others. He previously had “heard all of the so called “white” jazz. “I’d never heard that part of our culture,” he remembers, until the Montgomery Brothers. The organ trio concept had a profound influence on Martino’s rhythmic and harmonic approach. and he remained in that idiom as a sideman, gigging with Jack McDuff and Don Patterson. An icon before his eighteenth birthday, Pat was signed as a leader for Prestige Records when he was twenty. His seminal albums from this period include classics like Strings!, Desperado, El Hombre and Baiyina (The Clear Evidence), one of jazz’s first successful ventures into psychedelia.

John Scofield’s guitar work has influenced jazz since the late 70’s and is going strong today. Possessor of a very distinctive sound and stylistic diversity, Scofield is a masterful jazz improviser whose music generally falls somewhere between post-bop, funk edged jazz, and R & B.

Born in Ohio and raised in suburban Connecticut, Scofield took up the guitar at age 11, inspired by both rock and blues players. He attended Berklee College of Music in Boston. After a debut recording with Gerry Mulligan and Chet Baker, Scofield was a member of the Billy Cobham-George Duke band for two years. In 1977 he recorded with Charles Mingus, and joined the Gary Burton quartet. He began his international career as a bandleader and recording artist in 1978. From 1982–1985, Scofield toured and recorded with Miles Davis. His Davis stint placed him firmly in the foreground of jazz consciousness as a player and composer.

Since that time he has prominently led his own groups in the international Jazz scene, recorded over 30 albums as a leader (many already classics) including

Henderson, Dave Holland, Terumasa Hino among many jazz legends. Throughout his career Scofield has punctuated his traditional jazz offerings with funk-oriented electric music. All along, the guitarist has kept an open musical mind.

Touring the world approximately 200 days per year with his own groups, he is an Adjunct Professor of Music at New York University, a husband, and father of two.

Born in Newport Beach, California, in 1958, Howard Alden began playing at age ten, inspired by recordings of Armstrong, Basie and Goodman, as well as those by guitarists Barney Kessel, Charlie Christian, Django Reinhardt and George Van Eps. He has been working in New York City since 1982 and is recognized as one of the leading jazz guitarists in the city. Alden has been a Concord Jazz recording artist since the late '80s where his prolific recorded output as leader, co-leader, and versatile sideman, has captured an artist of consistently astonishing virtuosity and originality.

Romero Lubambo’s guitar playing unites the styles and rhythms of his native Brazilian musical heritage with his fluency in the American jazz tradition to form a distinctive new sound. After arriving in New York City in 1985, Romero quickly established himself as a "first call" session and touring guitarist who was in demand not only for his authentic Brazilian sound, but also for his command with a variety of styles. Lubambo is considered by critics to be "the best practitioner of his craft in the world today... the guitarist's facility, creativity and energy are in a class all their own."

New York native Peter Bernstein has been a part of the jazz scene in New York City and abroad since 1989. He has participated in over 80 recordings and numerous festival, concert and club performances with musicians from all generations. As a leader, Peter has released nine albums and a DVD, Live at Smoke. In September, Bernstein released a solo guitar record, Solo Guitar –Live at Smalls(Smalls Live), an intimate recording that makes you feel like you’re sitting in the front row at Small’s jazz club in New York City.