Helen and the late Harold McMaster established this endowed professorship in spring 2000. Helen McMaster, a long-time Perrysburg resident, has supported the arts at BGSU for many years. In 1992 she served as honorary chair of Bowling Green’s Campaign of the Arts, to which the McMasters donated $150,000.
Generous friends of BGSU, she and her husband previously donated to programs in music, business, science and the Center for Photochemical Sciences. They established the Harold and Helen McMaster Professor of Photochemical Sciences position in 1993, helped to purchase a photoelectron microscope for the center in 1992 and gave the University a $1 million gift for the McMaster Endowment Fund, which supports the chemical sciences, in 1985. 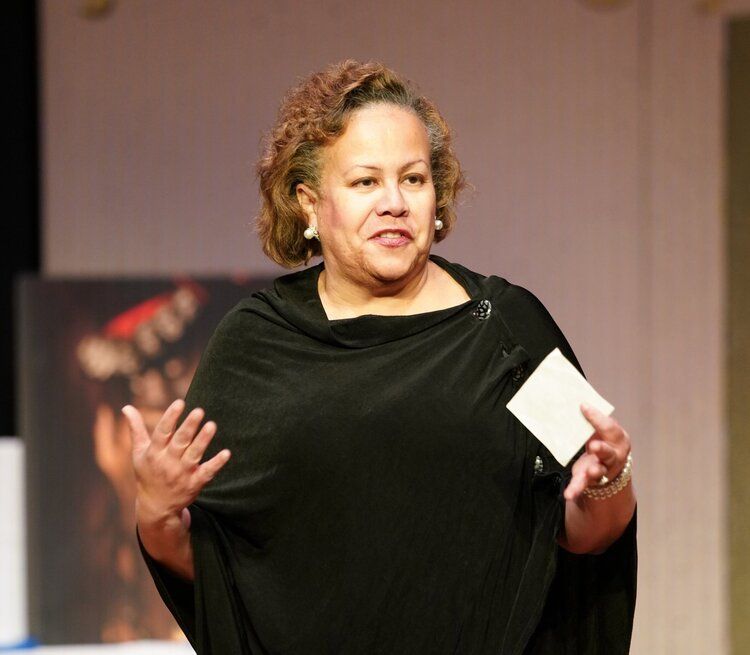 Ann Baltz is recognized as one of the leading opera educators in America today. As founder of OperaWorks™, her revolutionary holistic approach to singer training was the first of its kind to incorporate cross-disciplinary education for singers. Founded in 1987, OperaWorks™ boasts an impressive list of over 2,000 alumni worldwide, educational programs for teachers and coaches, and documented success of Ann’s teaching methods published in the International Journal of Music Education.

Committed to developing authentic performers, Ann conducts master classes and residencies for opera companies, universities and conservatories nationwide. Her innovative approach to performance has led to the creation of over 30 original pastiche operas at OperaWorks™ and through collaborations with music schools.

Established in Austin, Texas in 1991, Conspirare is a Grammy-winning and internationally recognized choir with a reputation for “expanding the boundaries of choral performance” (Wall Street Journal ). Conspirare, which translates from Latin as “to breathe together,” is led by founder and Artistic Director Craig Hella Johnson, and is comprised of soloists from around the country. Conspirare’s extensive discography includes 12 releases on the harmonia mundi label. The 2014 album The Sacred Spirit of Russia won the Grammy for Best Choral Performance. Conspirare’s ambitious mission is to engage the power of music to change lives. Through its artistic excellence, creative programming, commissioning, and educational endeavors, the

organization has established itself as an agent of change and a bedrock of the Texas arts community and beyond.

Vance Y. George is recognized internationally as one of the world’s leading choral conductors. He has conducted throughout the U.S. as well as Europe, Australia and Asia. During his 23 years as conductor with the San Francisco Symphony Chorus, the group was hailed as one of the finest in the world. On their behalf he accepted two Grammy awards for Best Choral Performances in 1992 and 1995 for Orff’s Carmina Burana and Brahms’ Ein Deutsches Requiem. Highly regarded as a teacher of conducting George has taught and presented workshops and lectures at many universities including the University of Wisconsin, Indiana University, Eastman School of Music, The San Francisco Conservatory, Cincinnati Conservatory, Kent State University and the University Berkeley-California.

Libby Larsen (b. 24 December 1950, Wilmington, Delaware) is one of America’s most performed living composers. She has created a catalogue of over 400 works spanning virtually every genre from intimate vocal and chamber music to massive orchestral works and over twelve operas. Grammy Award winning and widely recorded, including over fifty CD’s of her work, she is constantly sought after for commissions and premieres by major artists, ensembles, and orchestras around the world, and has established a permanent place for her works in the concert repertory. As a vigorous, articulate advocate for the music and musicians of our time, in 1973 Larsen co-founded the Minnesota Composers Forum, now the American Composer’s Forum, which has become an invaluable aid for composers in a transitional time for American arts. A former holder of the Papamarkou Chair at John W. Kluge Center of the Library of Congress, Larsen has also held residencies with the Minnesota Orchestra, the Charlotte Symphony and the Colorado Symphony. Click for a gallery of Libby Larsen's visit.

Composer, conductor and teacher Alice Parker began composing early, and wrote her first orchestral score while still in high school. She graduated from Smith College with a major in music performance and composition, then received her master’s degree from the Juilliard School where she studied choral conducting with Robert Shaw. Her life-work has been in choral and vocal music, combining composing, conducting and teaching in a creative balance. Her arrangements with Robert Shaw of folksongs, hymns and spirituals form an enduring repertoire for choruses all around the world. She serves on the board of Chorus America, and was recently honored by the Eastern Division Convention of the American Choral Directors Association. Parker has published books on melodic styles, choral improvisation and “Good Singing in Church.”

Described as having “a tight and attractive vocal blend and excellent choral discipline” (American Record Guide), The Thirteen is an all-star professional choir known for inspired and powerful live performance. Since its founding in 2012, the choir has been at the forefront of bringing invigorating performances to the American choral community in repertoire ranging from the Renaissance to the Romantic, from Bach to Bruckner; and from Gregorian chant to the world premieres of new American composers. In past seasons, The Thirteen has performed and been in residency at Yale University, Bowling Green State University, Eastern Illinois University, the University of Central Oklahoma, York College, The University of Tampa, Virginia Wesleyan University, St. Ambrose University, Southern Illinois University – Carbondale, Guilford College, as well as concerts throughout the United States. The Thirteen is committed to educating and inspiring the next generation of musicians, and frequently coaches students at the high school and collegiate levels in masterclass, workshop and collaborative performance sessions.

Leading heldentenor Jon Fredric West (‘74) presented a two-day residency at Bowling Green on Oct. 4–5, 2006. During the residency he gave a recital and held master classes. A Dayton native, West holds a bachelors’ degree in performance from BGSU. He attended the Opera Theater Program at the Manhattan School of Music for his master’s degree and completed postgraduate studies at the Juilliard Opera Theater. He has received grants from The National Opera Institute, The Sullivan Foundation and an award from The Liederkranz Foundation. West has established himself as the world’s foremost Siegfried in Richard Wagner’s Siegfried and Götterdämmerung. He recently sang the role as part of the complete Ring Cycle at the Metropolitan Opera in New York under James Levine. He came to the Met after triumphant performances in both operas at the Bavarian State Opera in Munich, led by Zubin Mehta. With pianist and former BGSU Artist-in-Residence Jerome Rose, he recently recorded Schubert’s Winterreise on Medici Classics. West has performed with the Philadelphia Orchestra, Chicago Symphony (at the Ravinia Festival), BBC Symphony Orchestra, Bayerische Rundfunk, Houston, San Francisco, Saint Louis, Boston, Pittsburgh, Toronoto and Cincinnati symphonies. He has sung under the batons of James Conlon, Sir Simon Rattle, Christoph Eschenbach, Andrew Davis, Walter Weller, Sir Colin Davis, Michael Tilson Thomas, Eugene Ormandy, Leonard Slatkin, Seiji Ozawa and Lorin Maazel.

Christopher M. Cock holds the Phyllis and Richard Duesenberg Chair in Lutheran Music and is director of the Bach Institute.

Through his activities as a choral music educator and distinguished solo artist, Professor Cock has forged a unique career path combining the roles of conductor and performer. He frequently brings his focus on outstanding repertoire, vocal technique, and polished musicality to high school ensembles throughout the country. For six years, he served as director of choirs for Lutheran Summer Music, the national Lutheran high school music camp. In 2006 he led the International Choral Invitational in Hong Kong and was conductor of the Spivey Hall High School Honor Choir, a festival begun by Robert Shaw. He has also conducted All-State Choirs in Minnesota, Georgia, and Ohio and the Collegiate Honor Choir in Pennsylvania. He has appeared at Carnegie Hall as guest conductor of the New England Symphonic Ensemble. 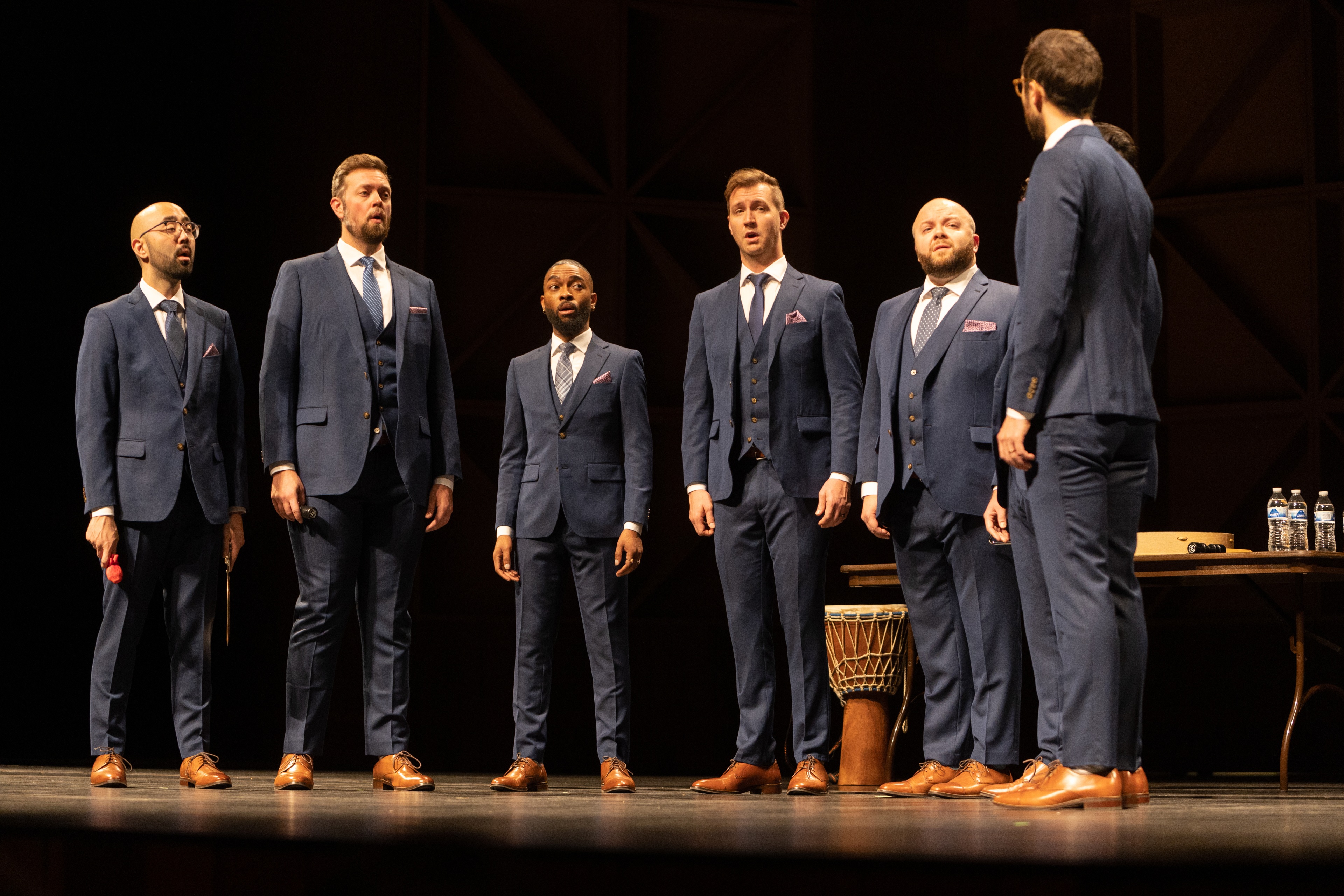 The “engaging” (New Yorker) men’s vocal ensemble Cantus is widely known for its trademark warmth and blend, innovative programming and riveting performances of music ranging from the Renaissance to the 21st century. The Washington Post has hailed the Cantus sound as having both “exalting finesse” and “expressive power” and refers to the “spontaneous grace” of its music making. The Philadelphia Inquirer called the group nothing short of “exquisite.”

As one of the nation’s few full-time vocal ensembles, Cantus has grown in prominence with its distinctive approach to creating music. Working without a conductor, the members of Cantus rehearse and perform as chamber musicians, each contributing to the entirety of the artistic process.

Opera News has called her “maybe the most influential singer in American history” and in fall 2005, she taught students at the College of Musical Arts. Famed singer Marilyn Horne returned to Bowling Green Oct. 4–6, 2005, as the inaugural artist of the Helen McMaster Endowed Professorship in Vocal and Choral Studies. She last visited BGSU in December 1996 when she gave a sold-out recital on the Festival Series. Currently focusing on a “master teacher” career, Horne spent several days privately coaching voice students in the College of Musical Arts. She also conducted two master classes featuring many of these same students. Horne’s five-decade career in opera, concert and recital has been celebrated throughout the world for the power and artistry of her unique and dazzling mezzo-soprano coloratura.

With a career spanning more than 25 years and 200 productions, Jay Lesenger’s stagings have been seen on stages across the country and recently Europe as well. Jay’s directing skills are reflected in a wide repertory of operas, operettas and musicals that includes WERTHER, MACBETH, LOHENGRIN, IL TRITTICO, THE BARTERED BRIDE, THE TURN OF THE SCREW, DIE FLEDERMAUS, THE CORONATION OF POPPEA and the five Mozart comedies.  He made his New York City Opera debut with a new staging of ANNA BOLENA followed by THE  MAGIC FLUTE and STREET SCENE. Debuts quickly ensued in San Diego, Pittsburgh and Hawaii. Jay is the Artistic/General Director of the Chautauqua Opera and in 2008 became the Director of the Opera Department at Northwestern University.

A dedicated Manhattanite, Jay was graduated from Hofstra University and continued his education in stage direction in the Master's program at Indiana University.  He is a nationally recognized teacher of acting for singers and for five years was an Associate Professor of Music at the University of Michigan/Ann Arbor, where he directed the School of Music Opera Theatre.  He is a frequent judge for the Metropolitan Opera National Council Auditions and other vocal competitions.

For over three decades, Samuel Ramey has reigned as one of the music world’s foremost interpreters of bass and bass-baritone operatic and concert repertoire. With astounding versatility he commands an impressive breadth of repertoire encompassing virtually every musical style from the fioratura of Argante in Handel’s Rinaldo, which was the vehicle of his acclaimed Metropolitan Opera debut in 1984, to the dramatic proclamations of the title role in Bartok’s Bluebeard’s Castle, which he sang in a new production at the Metropolitan Opera televised by PBS. Mr. Ramey’s interpretations embrace the bel canto of Bellini, Rossini, and Donizetti; the lyric and dramatic roles of Mozart and Verdi; and the heroic roles of the Russian and French repertoire.

Soprano Dawn Upshaw, a five-time Grammy Award winner, is devoted to sharing her compelling love of music along with her tremendous vocal talent with people the world over. She has achieved worldwide celebrity as a singer of opera and concert repertoire ranging from the sacred works of Bach to the freshest sounds of today. Her ability to reach to the heart of music and text has earned her both the devotion of an exceptionally diverse audience, and the awards and distinctions accorded to only the most distinguished of artists. In 2007, she was named a Fellow of the MacArthur Foundation, the first vocal artist to be awarded the five-year “genius” prize, and in 2008 she was named a Fellow of the American Academy of Arts & Sciences.