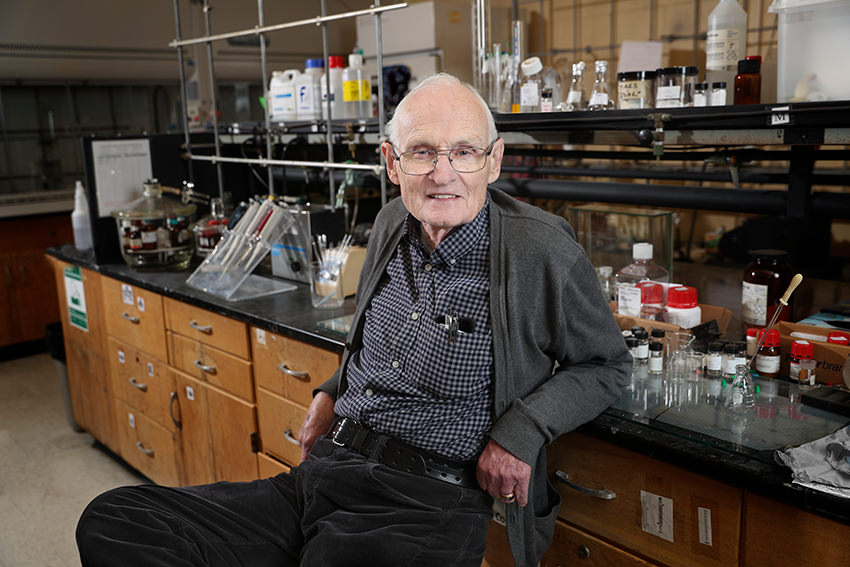 Dr. Marshall Wilson, research professor in the Department of Chemistry, has had a long and illustrious career in photochemistry and photo-biochemistry. In recognition of his work, the Inter-American Photochemical Society (I-APS) has named him a Fellow, an honor reserved for only 2 percent of the society's membership of about 600.

Wilson gave his award address at the I-APS annual meeting in Sarasota, Florida, earlier this month. About 40 BGSU current and former faculty members and students attended to congratulate him on the honor. Dr. Thomas Kinstle, BGSU Distinguished Teaching Professor Emeritus of chemistry, gave the opening remarks and welcomed Wilson to the fellowship.

The society was established to promote and disseminate knowledge and encourage development of photochemistry and allied subjects throughout the Americas. Its membership comes from academia, industry and government throughout North and South America.

Wilson has distinguished himself as a chemist and scholar over a diverse career. At BGSU, his research interests are directed toward photochemical application of lasers, primarily argon ion lasers, and fall into two broad categories: the laser synthesis of new materials and the development of reagents — substances that create a chemical reaction — for the photochemical manipulation of biological systems.

Throughout his career, Wilson’s work has been characterized by creative approaches to the development of new knowledge. He received a Bachelor of Science in chemical engineering from Pennsylvania State University and Ph.D. in chemistry from the Massachusetts Institute of Technology.

In his first academic position, at the University of Cincinnati, his interest in photochemistry was piqued by a publication from two colleagues on “Theory and Applications of Ultraviolet Spectroscopy.” He learned to use lasers and how to build them, and immediately applied them to his own research problems. One of his initial studies concerned the trapping of triplet biradicals with molecular oxygen and sulfur dioxide. The peroxides synthesized by this method were used to study the biosynthesis of prostaglandins and in the synthesis of insect pheromones. His biradical-oxygen trapping work also was developed into novel chemistry of vitamin K and was used to characterize the behavior of biradicals.

During a sabbatical at Würzburg, Germany, he taught a course in photochemistry that laid the foundations for modern transient absorption spectroscopy.

In later years, Wilson developed a methodology for efficiently targeting specific DNA sites and cutting the DNA at the targeted site.

Before joining BGSU in 2005, where he first served as interim director of the BGSU Center for Photochemical Sciences, Wilson was head of the chemistry department at Cincinnati for eight years. He also initiated the Ohio Photochemical Society Meeting, which promotes collaboration among regional photochemical scientists.

In addition to his groundbreaking research, he is a “fantastic teacher, an able administrator, a collegial colleague and an excellent mentor to young faculty,” said his BGSU chemistry colleagues Dr. Malcom Forbes, director of the Center for Photochemical Sciences, and Dr. Javaraman Sivaguru, associate director, who nominated him for I-APS Fellow status.