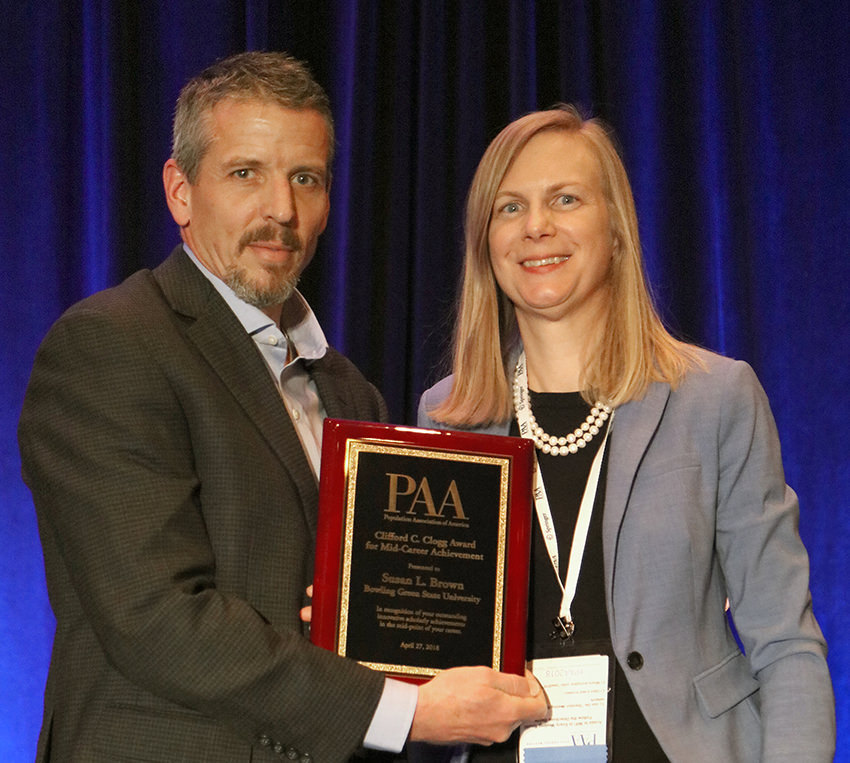 Susan Brown receives the 2018 Clifford C. Clogg Award for Mid-Career Achievement at the meeting of the Population Association of America last month in Denver, presented by Kyle Crowder, Blumstein-Jordon Professor of Sociology at the University of Washington.

Conventional wisdom tells us that family life in America is changing, but it is thanks to the research and scholarly contributions of Bowling Green State University sociologist Dr. Susan Brown that we now have specific insight into how.

In recognition of her achievements, the Population Association of America (PAA) gave Brown the 2018 Clifford C. Clogg Award for Mid-Career Achievement. Presented this year at the association’s meeting in Denver, the biennial award recognizes early career, outstanding and innovative scholarly achievements in population studies and demography. The award is sponsored by PAA in association with the Population Research Institute of the Pennsylvania State University, and commemorates the memory and creative contributions of Clifford Clogg to the field of quantitative methods and labor force demography.

Brown, chair of the Bowling Green State University Department of Sociology and Professor of Research Excellence, has worked with colleagues at BGSU and other institutions to provide a new look into family dynamics, especially how they are changing for older adults. She is the co-founder, with Distinguished Research Professor Wendy Manning, of the National Center for Family and Marriage Research at BGSU.

The mission of NCFMR is to support research on key questions about the effects of family structure and processes on the health and well-being of children, adults, families and communities and build research capacity with improved data and methods. The center brings together multidisciplinary networks of scholars and has directed top tier visibility to BGSU.

Her research into the later stages of family life in particular have led to awareness of such trends as “gray divorce,” co-habitation and repartnering among older adults, and have captured the attention not only of other scholars but also the national media, as we seek to understand the true nature of what is happening, beyond health concerns, grandparenting and retirement.

For example, Brown’s work with BGSU colleague Dr. I-Fen Lin has shown that, while co-habiting among younger adults is seen as somewhat provisional, older adults who live together have high levels of relationship stability. Another trend they have identified among older adults is “living apart together,” or being in committed, intimate relationships but living separately. Also, although the divorce rate among younger couples is on the decline, it is rising for older couples.

In addition to shedding light on the older generation, Brown and her colleagues have studied early adulthood, a little-understood phase of life, as well as the lives of same-sex cohabiting couples.

“The studies she has conducted are innovative and break new ground as they establish connections across the fields of sociology, family demography, and gerontology,” said her nominators from BGSU and other institutions. “Susan’s work is significant in documenting the unique meanings, quality, and character of relationships during the later stages of the life course.”

Her 2017 book “Families in America,” proposed and published by the University of California Press, provides an insightful and state-of-the-art treatment of contemporary family life in the United States.

Brown has also been active in her service to the research community. She is recognized in the field as a leader and was elected to serve on the board of the Population Association of America and to the council of the American Sociology Association Family Section. Her excellent reputation is also reflected in her tenure on the NIH Population Science Committee Study Section. “This is an honor only asked of the best in the field,” said her nominators.