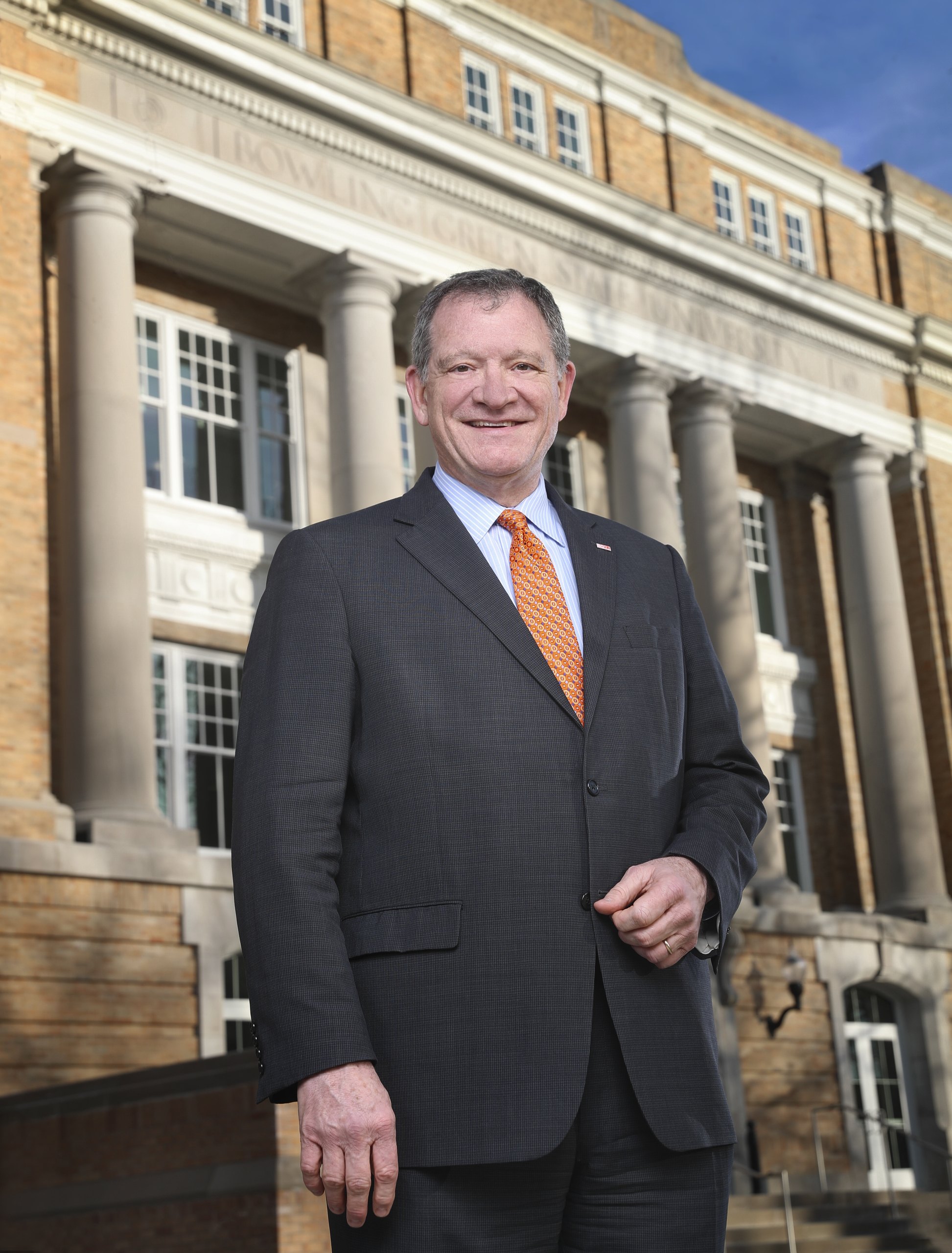 Rodney K. Rogers, Ph.D. '81, assumed the role as the 12th president of Bowling Green State University on Feb. 23, 2018, proceeding his interim appointment on Jan. 1, 2018. Prior to being named president, Rogers had served BGSU as provost and senior vice president for academic affairs since 2012 and, before that, as dean of the Allen W. and Carol M. Schmidthorst College of Business since 2006. He is the first alumnus to serve as president of Bowling Green State University, which currently has more than 18,300 students and 2,300 faculty and staff on its two campuses.

As president, Rogers continues to lead a transformation of Bowling Green State University. He has worked with faculty, staff and institutional stakeholders to launch two university-wide strategic plans, including Forward., a redefining approach launched in the midst of a global pandemic, to ensure BGSU embraces its role as a 21st-century public university for the public good.

At the heart of the University is quality, innovative and nationally ranked academic programs. Recognizing the need to consistently adapt to meet today’s workforce and societal needs, BGSU continues to elevate and expand its academic portfolio. During Rogers’ presidency, BGSU established a School of Nursing, School of Physical Therapy and also introduced in-demand and unique programs such as a first-of-its-kind Cedar Fair Resort and Attraction Management program, forensic science and manufacturing and logistics. While teaching and learning have always been a priority, faculty research funding has also increased 28% since 2018, totaling more than $81 million.

Under Rogers’ leadership, BGSU has seen record enrollments, its highest applications and admissions rates, its best four-year graduation and retention rates and its highest freshmen academic profile in the University’s history.

In an effort to meet students’ needs and improve the University’s efforts for each graduate’s success, Rogers was the key architect to launch Life Design, a University-wide initiative that leverages design thinking to support and empower students to excel in college and in their career. Rogers garnered transformational fundraising support to establish the Geoffrey H. Radbill Center for College and Life Design and the Michael and Sara Kuhlin Hub for Career Design and Connections to lead this historic effort.

BGSU is a national leader in partnerships, and Rogers has extended that commitment to both private and public organizations and agencies to increase the University’s impact on Ohio and beyond. These strategic partnerships, which are linked to academic programs, career outcomes and the University’s research and outreach, include national and global organizations such as Amazon, Bon Secours Mercy Health, Cedar Fair Entertainment Company, Northstar Aviation and the Ohio Attorney General.

Under Rogers’ leadership, BGSU successfully completed the Changing Lives for the World Campaign in December 2021, the largest comprehensive fundraising endeavor in the history of the University. Despite the numerous challenges of concluding the campaign in the COVID-19 global pandemic, BGSU finished the final year of the campaign at an all-time record, receiving more outright gifts and commitments in 2020 than at any other time since its launch in July 2014. In totality, BGSU exceeded the campaign goal by $55 million, raising more than $255 million. Since his appointment as president, BGSU raised more than $176 million. This success included the announcement of the Allen W. and Carol M. Schmidthorst College of Business, the first named academic college, receiving the largest gift in University history of more than $33 million from alumni and philanthropists Robert and Ellen (Bowen) Thompson to support scholarships for those from working families and securing the largest corporate gift in the history of BGSU from Cedar Fair Entertainment Company for more than $10.5 million.

Rogers was instrumental in the vision to complete the University’s first phase of its campus master plan, which elevated the quality of facilities on both campuses, including the new state-of-the-art Robert W. and Patricia A. Maurer Center, which houses the Schmidthorst College of Business; Kokosing Hall, the home of the School of Built Environment; and the new campus gateway, located in Old Campus. In fall 2021, BGSU began building the foundation Master Plan 2.0, which will guide the next 10 years of construction and renovation planning for more than 100 facilities, situated on more than 1,300 acres in Bowling Green, Huron and Perrysburg.

Never losing sight of the people who make BGSU what it is, Rogers appointed one of the nation’s first chief health and wellness officers in higher education and created the Division of Health and Wellness. BGSU continues to focus on public health and manage the COVID-19 global pandemic, and the University has also launched the Community of Care, an initiative to focus on the well-being of each student, faculty and staff member.

For the first time in the University’s history, BGSU created an institutional-wide brand, which focuses on the commitment to aspiring to become the preeminent public university that creates public good in Ohio, the nation and around the globe. This harnesses the unique qualities of a comprehensive, high-research, full-time, residential, nationally ranked university in the heart of the Midwest, forever embracing the mantra of a public university for the public good.

As a tenure-track faculty member, his research focused on the ways in which financial analysts use information, strategies firms employ to disclose information to the marketplace and the institutional role of the accounting profession within the capital markets. He published or presented more than 30 papers in a variety of academic journals and conferences. Rogers was a visiting research fellow at the Cranfield School of Management in the United Kingdom from 2001 to 2004.

In addition to his academic work, Rogers has consulted for a variety of global organizations and brands including Nike Inc., The Wendy’s Company, Starwood Hotels and Resorts Worldwide Inc., Vestas-America, Schnitzer Steel Industries Inc., WE Communications and the U.S. Department of Veterans Affairs Medical Centers. He designed and delivered more than 150 executive education programs integrating the development of financial understanding with leadership competencies, which have been delivered in the United States, the Netherlands, China, Thailand and Canada.

Rogers received a Bachelor of Music from Ohio Northern University and has an MBA from Bowling Green State University. After he practiced as a CPA for more than 10 years, Rogers completed his Ph.D. from Case Western Reserve University.