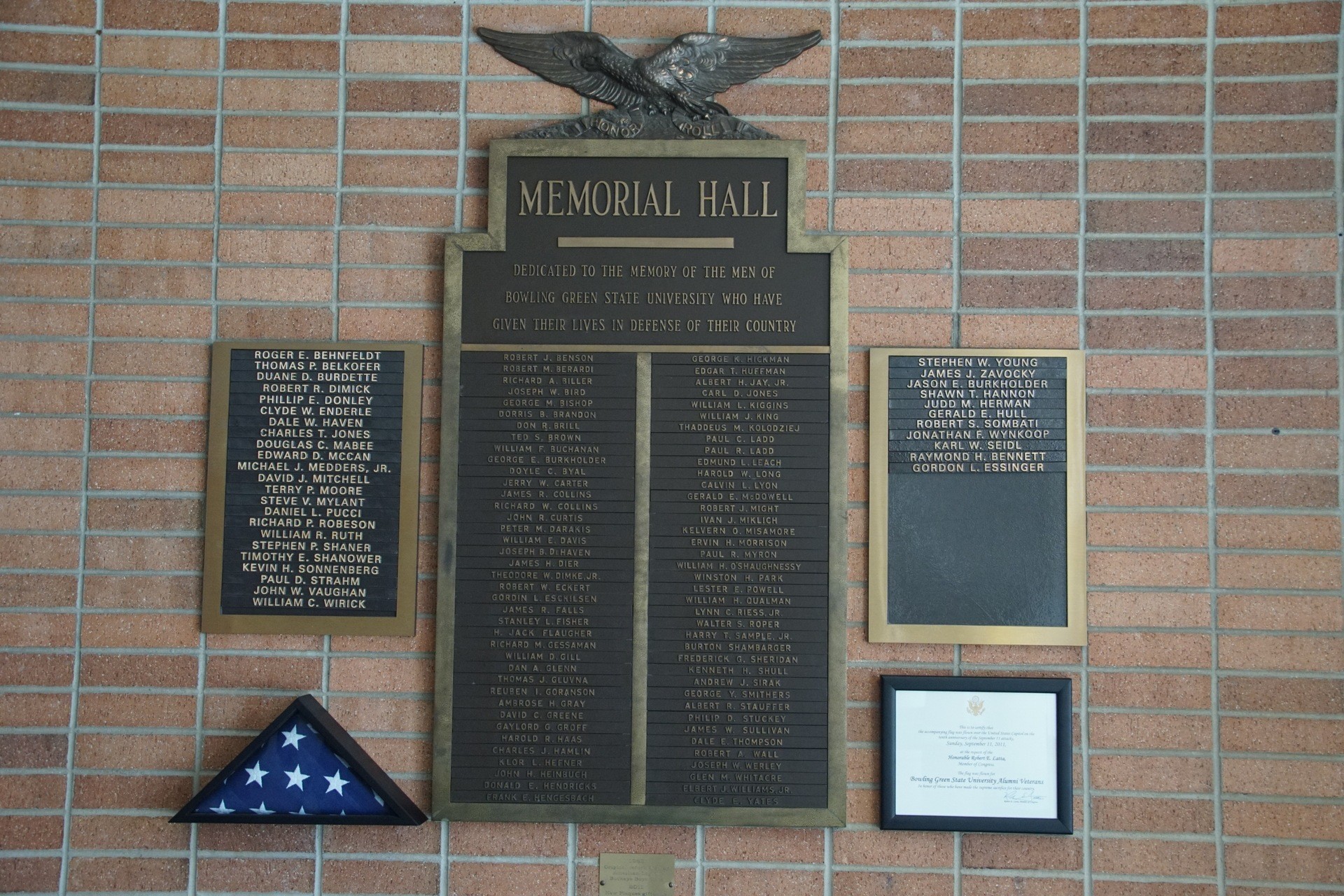 In November 2011, a lasting memorial was unveiled that included 25 newly identified fallen heroes who have made the supreme sacrifice for our freedom. Additional plaques were designed so that more names could be added. On Nov. 7,  six more names were added to the Memorial.

SSG Jason E. Burkholder attended Bowling Green State University during the 2004-2005 school year. He graduated from Elida High School in 2000. After high school he served 4 years in the Marine Corps. He then joined the Ohio National Guard and transferred to the Illinois National Guard.  Burkholder served three combat missions in Iraq and Afghanistan and two non-combat missions.

Master Sergeant Shawn T. Hannon was a 1991 Bowling Green State University graduate with a bachelor’s degree in political science.  In 2006 Shawn earned his Juris Doctor from Capital University Law School. He was a member of the Ohio National Guard 37th Infantry Brigade Combat Team.  SFC Hannon was killed April 4th, 2012 while deployed to Afghanistan for Operation Enduring Freedom by a Taliban suicide bomber in Maimanah, the capital of Faryab province, Afghanistan.

Shawn was born on March 3rd, 1968 in Columbus, Ohio Hannon, a 1986 graduate of Grove City High School, was a Columbus lawyer and chief legal counsel for the Ohio Department of Veterans Services. Prior to joining ODVS, he worked several years for the Columbus law firm of Yavitch & Palmer. A member of the Guard for more than 20 years, he was “proud to be a soldier and all who loved him knew it,” his family said. “Shawn felt it was a privilege to serve his country ...”. He and his wife, Jamie, have a son, Evan.

Previous deployments for Master Sergeant Hannon included Iraq, RAF Lakenheath, England, Mississippi for Hurricane Katrina, and Florida for Hurricane Andrew. Shawn was awarded the Bronze Star for heroic service, a Purple Heart for being wounded in combat and the Ohio Distinguished Service Medal.  Inurnment was at Ridgewood Cemetery Wellston, OH. One of the brigade’s primary jobs was to train members of the Afghan National Police. At least 13 people in all died at the park in the suicide bombing.

Two other soldiers with the Ohio National Guard were also killed in the attack: Capt. Nicholas J. Rozanski, 36, of Dublin; and Sgt. 1st Class Jeffrey J. Rieck, 46, of Upper Arlington. Four other Ohio soldiers were wounded in the attack including BGSU student SPC Austin Weigle of Bryan; and 2008 BGSU graduate 1LT Christopher Rosebrock of Hicksville.

CPT Judd M. Herman graduated from Bowling Green State University in 1984 with a Bachelors Degree in International Business. He was enrolled in Army ROTC and was commissioned as a Second Lieutenant at graduation. Judd was from Fostoria, OH, and graduated from St. Wendelin High School. At BGSU, he played 4 years on the Rugby Team. He began his Army career with the 5th Infantry division.

Latter he served as an operational detachment commander in the 1st Battalion Special Forces. CPT Herman served during Operation Desert Storm where he participated in securing the US Embassy in Kuwait City. Judd died in a plane crash on June 15, 1991 while stationed at Ft. Bragg.

CPT Gerald Edward Hull graduated from Bowling Green State University in 1965. He was a member of the Alpha Tau Omega Fraternity and served on the Intramural Staff along with fellow fraternity brother Stephen Young (see photo below). Stephen Young was also a casualty in Vietnam, when then 1LT Young was killed by a sniper in Chuong Thien Province on September 6, 1969.

Captain Gerald Edward Hull was from Youngstown, Ohio, born on January 18, 1943. He was 27 and married with a young daughter when he died. Friends remember him and his little red MG convertible and his love of life prior to deployment. Gerry was commissioned through OTS and then attended flight school at Moody AFB, GA.  Upon graduation from flight school he went on to B52’s and was a B-52 copilot at Grand Forks AFB in October, 1967. Two months later, he had orders to become an O-2 FAC pilot.

Captain Hull was deployed to Vietnam on July 19, 1969 as a Bilk Forward Air Controller assigned to the 20th Tactical Air Support Squadron, 504th Tactical Air Support Group, 7th Air Force at Da Nang. He flew in support of the 101st Airborne Division.  He and 1LT James Stephen Baird were flying an O-2A, S/N 67-21358, on a training mission when they crashed into a ridge in Thua Thien Province South Vietnam on February 15, 1970. Their bodies were recovered. Captain Hull had 4 years of service and served 212 days in combat. He is honored on panel 13W, line 14 on the Vietnam Veterans Memorial. Gerald is buried at Forest Lawn Memorial Park, Youngstown, Ohio.

PFC Robert Stephen Sombati attended Bowling Green State University during the Fall semester of the 1967-68 school year. Robert was born on April 17, 1949 in Akron and was from Fairlawn, Ohio. He was a member of St. Hillary Catholic Church and a graduate of Copley High School where he was on the football and wrestling teams. After leaving BGSU, Robert was inducted in the Army through the Selective Service draft in June 1969. He reported to Vietnam on November 22, 1969 and served with E Company, 2nd Battalion, 5th Cavalry, 1st Cavalry Division.

The infantryman was killed on January 5, 1970 in Tay Ninh Province due to enemy action in a firefight that lasted 3 days and resulted in the destruction of the battalion and regimental headquarters of NVA 95C. As a result of the contact a heavy toll was exacted on the NVA. For his actions Robert was awarded the Bronze Star Medal and the Purple Heart posthumously. Robert is buried in Holy Cross Cemetery, Akron, Ohio. PFC Sombati is honored on the Vietnam Veterans Memorial on panel 14W, row 1.  A section of Interstate 77 in Summit County is named in his honor:  “a portion of the highway … shall be known as the “Army PFC Robert S. Sombati, Vietnam BSM and OLC PH, Memorial Highway.”

CPT Jonathan F. Wynkoop , Maumee, OH, was a 2010 Bowling Green State University graduate with a bachelor’s degree in Psychology. CPT Wynkoop was a four-year member of Junior Reserve Officers’ Training Corps at Springfield High School from which he graduated in 2005. Jonathan was assigned to 2nd Battalion, 3rd Field Artillery Regiment, Division Artillery, 1st Armored Division. He was participating in Iron Focus 2015, a two-week, division-level training exercise when a mine-resistant, ambush-protected all-terrain vehicle, or M-ATV, backed over his cot around 5 a.m. March 31, 2015. Jonathan is survived by his wife, Rachel, and children Graham, Leah, and Jacob.

While in JROTC, he was a member of the 9-Man Exhibition Squad that won the national championship at Daytona, FL, in 2004. While attending BGSU, Jonathan, was a member of the 180th Fighter Wing Security Forces, where he was deployed to Saudi Arabia, and also served as a volunteer with the Wood County Central Joint Fire Department in Portage, OH, from 2006-09.

He was honored by the fire department in the summer of 2015 with a fund raising event for his family.