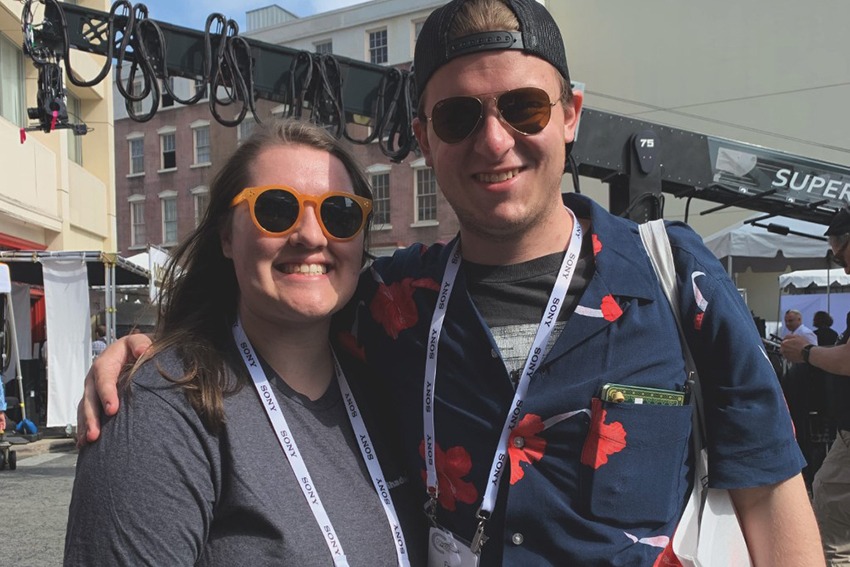 Jillian Riley and Finnegan Burres at the Cinegear Expo, an equipment convention for filmmakers can view the top equipment on the market.

During my time at Shadowcast Pictures in Van Nuys, California, I learned a great deal, both about the film industry as a whole and myself.

Over the course of the month I worked there, I became familiar with the builds of several models of cameras, including RED and ARRI brand cameras. Alongside my Bowling Green State University colleague, Finn Burres, I worked as a camera prep technician, checking in and out equipment, servicing and cleaning equipment and helping assistant camera operators get the equipment they need. After equipment was returned, I helped quality check the equipment to make sure it was working properly.

However, my favorite, and perhaps the most helpful part of this internship was visiting and working on the set of a feature film that our boss got us on. We were only supposed to be there for a day, but the crew liked us so much that they asked us to keep coming back. We worked as production assistants, and made a ton of working connections for the future, which was really exciting.

I would recommend this internship highly to anyone who sought it out. My bosses, Jay Ellison and Ryan Malehorn, were so incredibly helpful and encouraging, and the environment couldn’t have felt more comfortable. I had a blast, and I can’t wait to head back to the Los Angeles area someday.