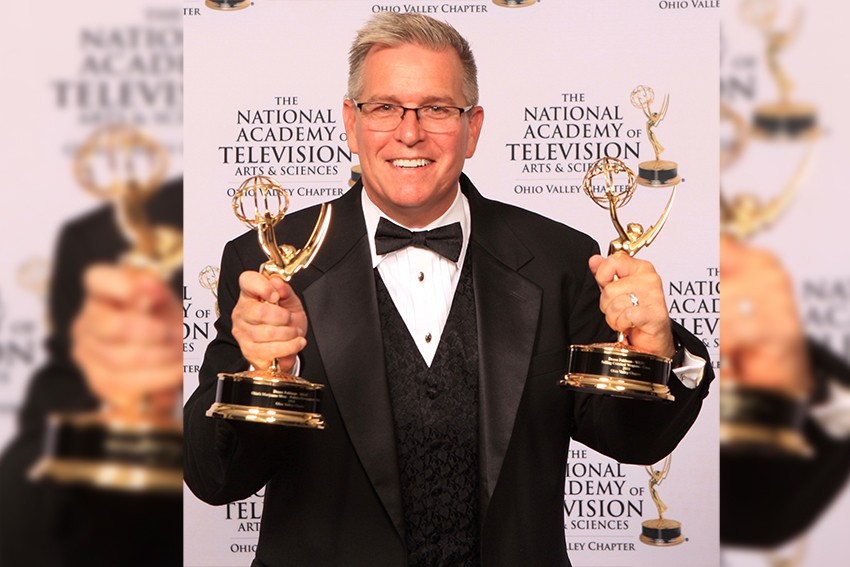 He’s an investigative reporter who digs deep to uncover a story, a journalist who travels overseas to cover war or human rights issues and a reporter who focuses on the important local issues that affect people in their cities and neighborhoods.

These are just a few of the reasons why Bowling Green State University alumnus Duane Pohlman ’87 was recently named best Ohio TV reporter by the Associated Press.

Pohlman is an investigative reporter for WKRC-TV, Channel 12, in Cincinnati, where he has worked since September 2016. Prior to landing his current position at WKRC, Pohlman worked at several television stations across the country.

“I’ve lost track of how many stations I’ve worked at, but my first job was in Fort Wayne, Indiana, at WPTA, where I started working before I graduated,” he said.

Since then, Pohlman has won best reporter or reporter of the year 10 times in five states and has accumulated several Emmy awards as well as other top honors. He credits his Bachelor of Science degree in journalism from BGSU as his major foundation for career success.

“Bowling Green was amazing when I was there,” he said. “I was taught by some of the best journalists and professors in the country.”

Pohlman is from Delphos, Ohio, a small town located just northwest of Lima, making BGSU close to his hometown.

“There are a lot of schools that teach journalism, but Bowling Green was accessible,” he said. “For me, it was all about the possibilities I could explore.”

When Pohlman attended BGSU, there was not a TV news organization like there is today with Falcon Media. Instead, he got involved with the Bowling Green Radio News Organization.

“I did a show called ‘Head to Head,’” he said. “We were all about doing broadcast versions of serious journalism.”

Pohlman was serious about learning journalism and reporting. He eventually became news director and made sure to dress the part.

“I would dress in a suit a lot,” he said. “And people were like, ‘who is this guy?’ And I thought, if you’re going to do it, you’ve got to be professional about it.”

Pohlman touts BGSU as a place that gave him the opportunities that he wouldn’t have found anywhere else.

“I fell in love with television and I got bitten by the journalism bug at BGSU, which really propelled me into the avenues I wanted to go,” he said.

The landscape of journalism and television news has changed since Pohlman was a student at BGSU. He hopes the new generation of journalists can help change the industry in how news is delivered.

“Work hard, be smart, focus on what you do, but also be aware that you’re the generation that’s going to reinvent how it’s done,” Pohlman said.

Aside from his daily duties as an investigative journalist, Pohlman is excited to work with the Ohio Center for Investigative Journalism, which he helped found.

He hopes the non-profit organization can offer more students across Ohio the opportunity to gain valuable experience through internships. It’s something he is passionate about, and something he can do as a way to give back.

“I’m a proud Falcon and I owe a lot of what I am and what I do to what I got at BGSU,” Pohlman said. “BGSU gave me a launching pad to the world. I have never forgotten that.”