Dr. Nicole Kalaf-Hughes, associate professor of political science at Bowling Green State University, takes teaching to a new level, bringing to the classroom the same enthusiasm for her discipline that she displays in her research. In recognition of her creative teaching methods and dedication to her students’ success, she received the CQ Press Award for Teaching Innovation from the American Political Science Association (APSA) at the organization’s Annual Meeting and Exhibition, held Aug. 29-Sept. 1. 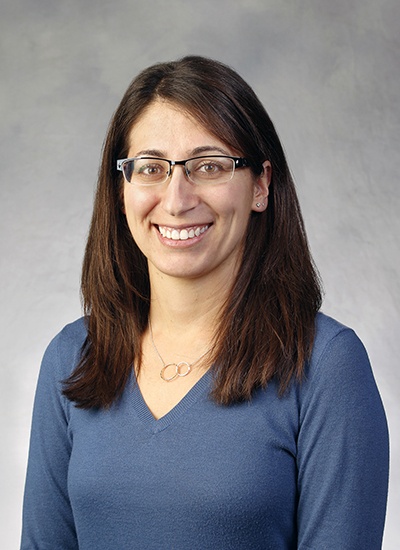 Kalaf-Hughes joined BGSU after receiving her Ph.D. in political science from the University of California, Davis in 2012. She teaches courses in American politics, research methods, race and ethnic politics, and political institutions at the undergraduate and graduate level.

Her research focuses on race and ethnic politics, American political institutions, and legislative behavior. Her work has appeared in Politics, Groups, and Identities, the Journal of Public Policy, Policy Studies Journal, the Journal of Political Science Education, and other journals.

In announcing its decision, the Award Committee said, “It would be impossible to convey the breadth and depth of Kalaf-Hughes’s contributions to teaching, or the enthusiasm expressed by her nomination letter writers.” The committee highlighted her teaching innovations, research on pedagogy, and her mentorship and service.

According to the committee, “Kalaf-Hughes has taught undergraduate courses on American Politics, The Presidency, Latino Politics, Racial and Ethnic Politics, Research Methods, State and Local Politics, Legislative-Executive Relations, and California Politics, as well as graduate seminars in American Politics, Research Methods, and Racial and Ethnic Politics. Her nominators describe her teaching as passionate, innovative, challenging, and highly successful in piquing interest and building skills.

“Kalaf-Hughes has invested heavily in developing her teaching skills by participating in several pedagogic workshops. She also shares her talent by serving as a leader in the information literacy community at Bowling Green. Most notable, however, is her development of an innovative simulation and her use of data from that simulation to contribute to understanding on how faculty of political science may better engage students through open educational resources.

“Over the past four years, Kalaf-Hughes, in collaboration with a colleague, has developed an innovative, co-taught simulation to help students to understand the interplay between national and local issues in Congress, and the relationships between members of Congress and executive branch officials. By examining two policy issues — immigration and transportation financing — in a two-course, co-taught module, the pedagogic model aims to improve upon the shortcomings of single-case simulations and traditional lectures, more effectively building knowledge, skills, and interest in American politics.

“To improve the simulation and better understand its role in student engagement, Kalaf-Hughes and her colleague analyzed student responses to anonymous surveys about their experience. Their insights are described in the pedagogic article ‘Working Together: An Empirical Analysis of a Multiclass Legislative-Executive Branch Simulation,’ published in the Journal of Political Science Education. Their research adds to a body of knowledge that aims to understand when and how simulations and other open educational resources may improve engagement with material, which has important implications for student engagement and retention. Following up on these findings, Kalaf-Hughes conducted further research on this pedagogic topic. In 2018 she presented her research at the APSA Centennial Center Workshop on Teaching American Government and more recently she was invited to revise and resubmit an article focused on reaching students with low interest in American Government courses.

Saying that Kalaf-Hughes is clearly “an extremely talented and dedicated teacher,” the committee concluded that it is unsurprising that in 2016 she won the Sigma Alpha Pi Teaching Award.