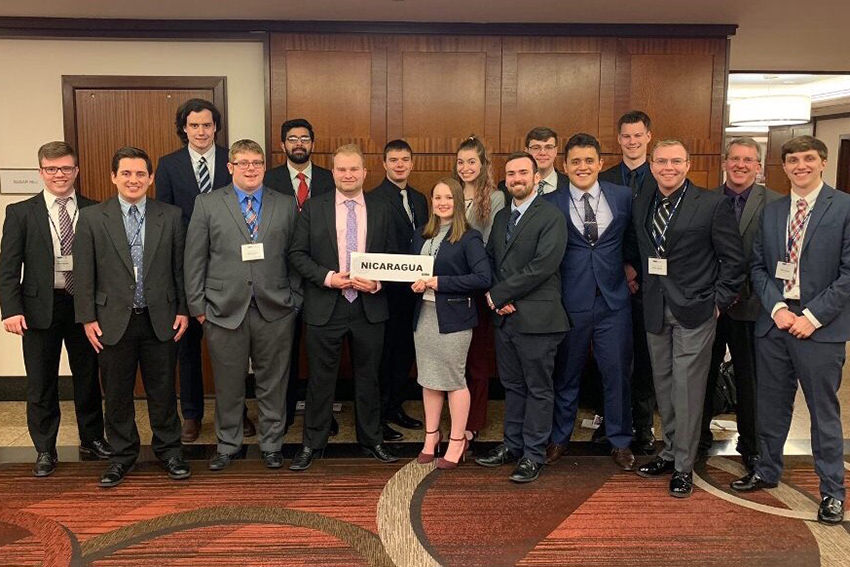 BGSU students participating in Model U.N. had a rich and fruitful learning experience this year at the National Model U.N. Conference held recently in New York, including the opportunity to share thoughts with the actual U.N. delegates who are developing policies. For the second year in a row, the BGSU team earned honorable mention, which was the fourth time in its history.

The team’s head delegate, Brandon Willinger, a senior majoring in political science, delivered a speech in the U.N. General Assembly (UNGA) room about his view on the U.N. Sustainable Development goals. The conference was asked to allow students to speak in the UNGA room on this topic so that they could record and transmit them to the U.N. delegates and committees that are addressing the goals and formulating policy, as well as committees that are charged with engaging youth on these issues.

“It was quite a thrill for Brandon and the others who spoke,” said faculty adviser Dr. Marc Simon, associate professor of political science and coordinator of the Peace and Conflict Studies Program.

At the conference, the team made a connection with a delegation from Universidad de Las Américas Ecuador, whose faculty adviser is a BGSU alumnus who also participated in Model U.N. in the 1990s.

“We have made arrangements to form a joint delegation at next year’s conference which will pair BGSU students with Ecuadoran students,” Simon said. “Preparations will be done over Skype and internet-based communications.”

“We learned the foreign policy positions of Nicaragua on 24 different international issues and argued for U.N. resolutions on those issues with students from approximately 160 other universities who represented other U.N. member states,” Simon said.

Model U.N. is a role-playing simulation of the deliberations of the U.N. General Assembly and other U.N. organizations. Students learn how to negotiate in small and large groups and must argue for positions with which they may personally disagree.

“By actually playing the part of diplomats, students learn the process of diplomacy and the functions of the U.N. in ways which we cannot achieve in the classroom,” Simon said. “They improve their academic skills (writing, research, public speaking) as well as dozens of ‘soft skills’ required of professionals working with diverse groups of people in formal and informal settings.

“Of the approximately 3,000 students at this conference, over half are from other countries (some come from universities in Europe, Latin America and Asia; others are international students studying at U.S. universities. Students learn to negotiate and build coalitions with people from an incredibly diverse set of backgrounds.”