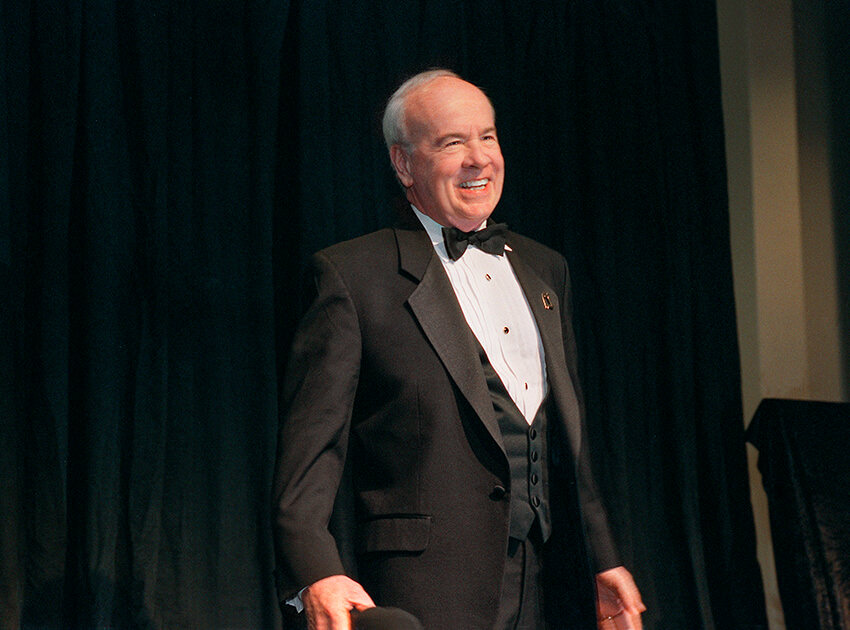 Tom became Tim to avoid confusion with British movie star Tom Conway, but he may have never lost the “Phantom” nickname, which he earned for diving into the old golf course quarry in the middle of the night for golf balls.

Perhaps most well-known for his portrayal of Ensign Charles Parker in “McHale’s Navy,” Conway also co-starred on “The Carol Burnett Show” and starred as the title character in the “Dorf” series of films. Younger fans might recognize him as the voice of Barnacle Boy in “SpongeBob SquarePants.”

“Growing up, I remember watching icon Tim Conway on ‘The Carol Burnett Show’ and he was too funny,” said BGSU President Rodney K. Rogers. “We are saddened to learn of his passing. His acting and comedy career drove the cultural vitality of our society.”

While at BGSU, Conway was the Phi Delta Theta chaplain, sophomore class president and a member of the Catholic Newman Club. He also participated in student talent shows and was half of a comedy duo on the popular “Sunny Side Up” broadcast, which aired every weekday morning from the former University Union on radio station WWBG. Fellow Phi Delta Theta member Dick Moss ’56 was his “Sunny Side Up” partner.

“Tim was always an entertainer,” Miles said. “He would have funny things to tell us about the day and/or what happened in the evening. Once in a while, it would run too long and we might be up until midnight listening to Tim tell us about his adventures.”

Conway enlisted in the Army after graduation, briefly serving as master of ceremonies for an all-Army show. He then returned to the Cleveland area, working as a comedy writer for KYW-TV, then as producer-director of “Ernie’s Place” on WJW-TV. While at the station, Conway caught the attention of actress Rose Marie, who loaned tapes of Conway to TV personality Steve Allen, who signed him for three guest appearances on his show. This turned into a regular spot and then visiting performances as Conway started to gain a national following thanks to his role in the World War II comedy “McHale’s Navy.”

Miles remembers his and his fraternity brothers’ confusion, when while watching “The Steve Allen Show,” they saw a comedian called Tim Conway, who looked exactly like their buddy Tom Conway – only to find out he was one in the same.

“That was a big surprise for all of us,” Miles said. “We all got on the phone and called around to the other Phi Delts to talk about it.”

Conway earned a Golden Globe Award and six Emmys. He was inducted into the Television Academy Hall of Fame in 2002.

In 2010, Dr. Charles Coletta, lecturer in popular culture, presented Conway with the BGSU Centennial Award at the Chagrin Valley Little Theater as part of a fundraiser to celebrate the theater’s 80th anniversary. At the fundraiser, Conway sang BGSU’s fight song, “Ay Ziggy Zoomba.”

“He could not have been a nicer fellow,” Coletta said. “He talked fondly about Bowling Green and hanging out at the union [a smaller, log cabin-style facility]. I remember him talking about being Bowling Green’s greatest C student.”

Coletta added that Conway was generous to the Browne Popular Culture Library, to which he donated hundreds of items, and with his time, helping a student who was writing his thesis about the early days of comedy on television.

“He was always entertaining,” Coletta said. “Always on, giving comedy routines for the secretary when he’d call. He was a crowd pleaser.”

Former Dean of Libraries Linda Dobb said at the time of Conway’s donation, “Since the boxes arrived, every day around here has been like Christmas. Every day, we find some wonderful new piece of video that just makes you marvel at the man’s talent.”

Miles added, “He always did things for Bowling Green. He was really, really supportive. Everything was BG and ‘Ay Ziggy Zoomba.’ He was very appreciative of the education he got here.”

Conway made several return visits to BGSU, including for a 1959 dance and magic show and for a 1966 Alumni Association event. This was the same year he received the University’s eighth annual Distinguished Alumnus Award, which is given to an alumnus making the most outstanding contribution in his respective professional field or to the advancement of the University. One of his last visits to campus was in 2002, when he helped dedicate the new Bowen-Thompson Student Union.

During the union dedication, Conway told the audience that he had several jobs as a student. One way he made money, he said, was to boil eggs, make egg salad sandwiches and sell them to sorority girls.

The actor, writer, director and comedian was born in Willoughby, Ohio, in 1933. He was married to Falcon Flame Mary Anne Dalton ’55 for 17 years before divorcing in 1978. He is survived by his second wife, six children, stepdaughter and two granddaughters.

“I was just saddened, of course, when I heard that he had passed,” Miles said. “It’s a shame that we lost a great comedian today.”