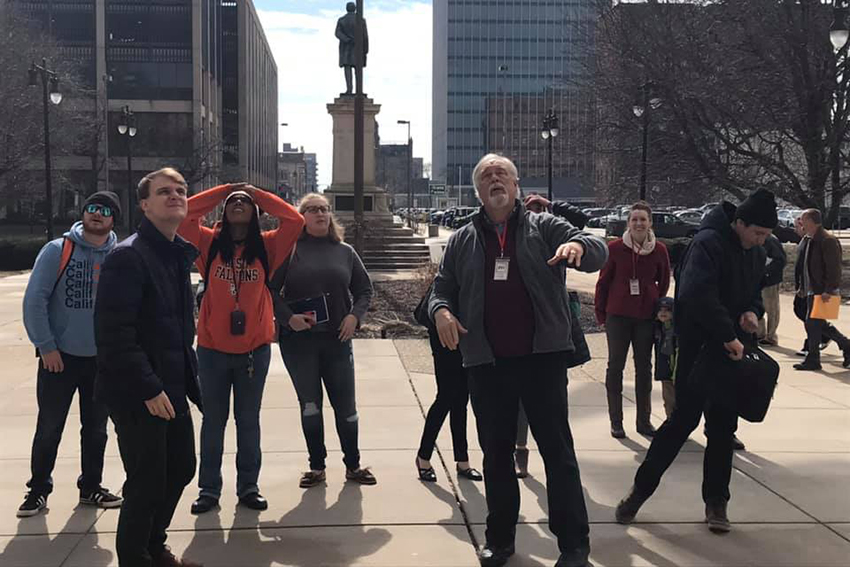 The Renaissance is known as a time when European culture, art, politics and the economy flourished. Toledo, Ohio, had its own Renaissance in the early 20th century and proclaimed the city as a place of promise. Students in Dr. Allie Terry-Fritsch’s “Critical Issues in Early Modern Art History" seminar this semester explored the architecture and people that shaped Toledo’s identity as a site of renewal through patronage of architecture and art inspired by the Renaissance.

Through focused examination of select Toledo buildings, the students discovered “the nuanced strategies of architectural appropriation that situated early 20th-century residents within a fantasy of the golden age,” Terry-Fritsch said. The histories they uncovered tell an interesting story, she added, “from Lamson’s, the luxury department store, that framed its wares with the insignia of the prestigious labor guilds of Renaissance Florence to the vaudeville theater that transported the Ca’ d’Oro from Venice to downtown Toledo.

“The general themes of their research demonstrated how cities express their desires through architecture,” she said.

The class’s final project, “The Toledo (Ohio) Renaissance” symposium and exhibition, is designed to draw attention to the Renaissance precedents for Toledo’s urban cityscape and instigate reflection on the role that Renaissance culture played in establishing the city, and its citizens as a sophisticated counterpart to the major metropolitan centers of the East Coast.  It also highlights the contributions of select Toledoans to the robust arts community of Toledo.

The symposium, from 1 to 3 p.m. May 8 in 1101 Fine Arts Center, will feature a keynote lecture by Dr. Ted Ligabel, professor and director emeritus of Eastern Michigan University’s Historic Preservation Program, and research presentations by the students about Toledo’s “Renaissance” monuments. A reception and the opening of the exhibition in the Dorothy Uber Bryan Gallery lobby will immediately follow the presentations.

For undergraduate student Roman Brown, the research gave him a foundation that will allow him “to go anywhere and find places to look at the architecture and know there are resources for discovering more information.”

Students Peter Funk of Maumee and Michelle Chamberlin of Perrysburg agreed that they had never taken much interest in Toledo and its architecture despite living in the area for most of their lives. “Now I see the rich history of the area and I will be able to share that with others and take it with me wherever I go,” Chamberlin said.

Grace Nelson and Kari Boroff are the MA graduate students in art history. They agree the experience they have gained in this seminar will serve them well in their careers. Boroff, who wants to work in a museum, said, “The experience has taught me how to curate an exhibition and how to collaborate with others.”

Support for the exhibition and symposium was made possible by the Division of Art History and the School of Art at Bowling Green State University.

Both the symposium and exhibition are free and open to the public. Any questions may be directed to Dr. Allie Terry-Fritsch at alterry@bgsu.edu