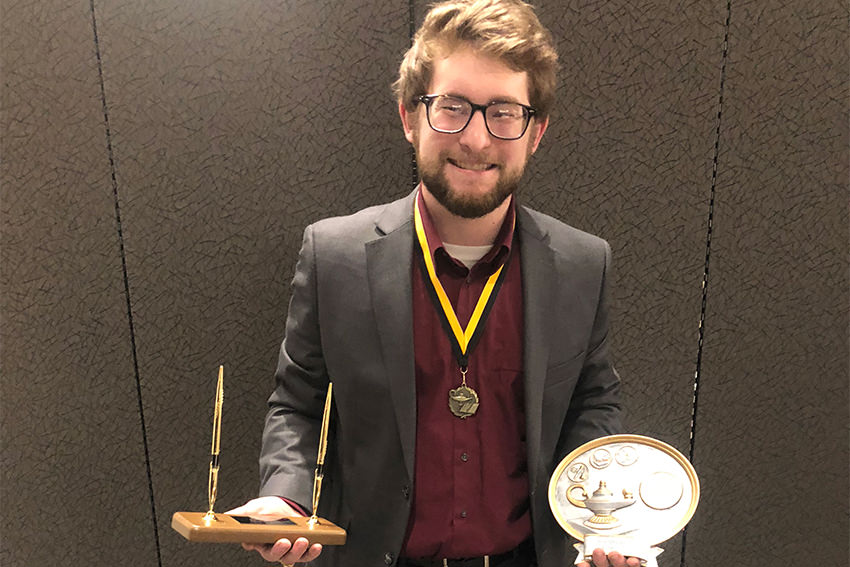 Liam Garrett, a student member of the Bowling Green State University mediation team, was proudly named the Outstanding Intercollegiate Mediator in the nation at the National Championship Tournament.

The National Championship Tournament recently was held at Drake University in Des Moines, Iowa, and had competing teams from universities around the nation and beyond, including Singapore and India.

Each year, the International Academy of Alternative Dispute Resolution names 35 All-American Intercollegiate Mediators. The All-American Award means that a contestant placed first through 10th in the competition.

The mediation team is part of BGSU's Honors College.

“I went in hoping to get the All-American award, and never expected to win first place; competition from other schools is much fiercer,” Garrett said. “It was a shock to take first place over a couple of them, but it was exciting.”

There are individual and team awards. For team competitions, three members are on the team and they each compete in one round in which each plays the client, advocate and mediator. For individual awards, personal score is combined with the team score.

“Along with my success, our team took home fourth place,” Garrett said. “I wouldn’t be able to do what I did without my teammates.”

It was the fourth year the University participated in the National Championship Tournament, placing in the top four each year.

“Drake University gives a scholarship if you win an All-American distinction, and also for winning the top award that I won,” Garrett said. “I just have yet to find out what that amount is.”

Garrett is Sociology major, and created his own minor, alternative dispute resolution and mediation, through the College of Arts and Sciences. He is in his third year, but plans to graduate this year.

“One of the great skills you get out of the mediation team is public speaking skills and learning to problem solve,” he said. “If students are interested in gaining these types of skills, doing mediation and being on the team is the way to go. The students who are involved believe gaining these skills to be so valuable.”