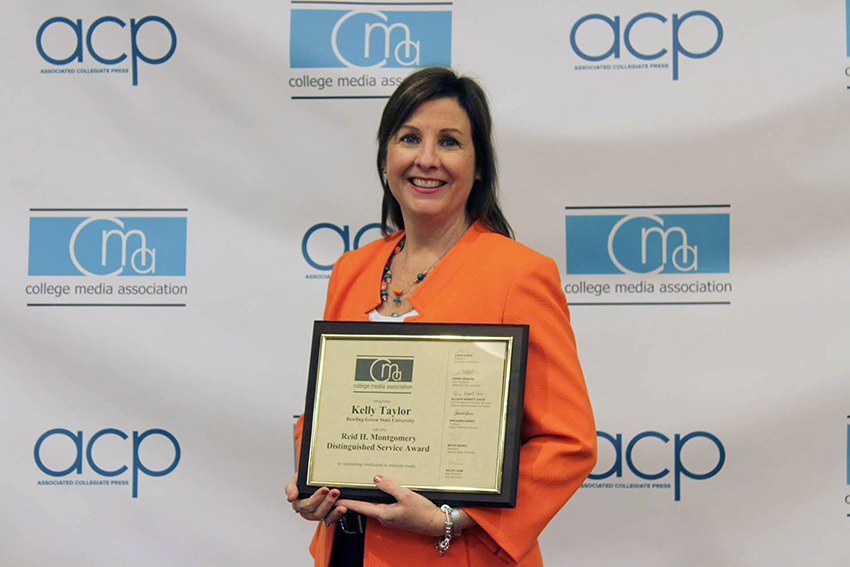 Kelly Taylor, a senior lecturer in journalism, is the recipient of the College Media Association’s Reid H. Montgomery Distinguished Service Award. A full-time BGSU faculty member for 20 years, she has served as chair of the Student Media Advisory Committee for the last five years.

The award is named for the late Reid H. Montgomery of South Carolina, an influential member of the College Media Association, and honors an institution or individual who has made an outstanding contribution to collegiate media or student media advising.

At BGSU, she has worked assiduously in behalf of media and communication students, according to Robert Bortel, director of student media, who nominated her for the award.

With the opening of the high-tech, extensively renovated Michael & Sara Kuhlin Center in fall 2016, home to the School of Media and Communication, students now have access to a professional setting in which to learn the most current tools of the trade.

Being so involved with the oversight of student media operations, Taylor realized that “more funding was needed to retain the quality student learning experience and that a historically financially independent student media operation needed supplemental support,” Bortel said. That was the beginning of a three-year lobbying and educational process in 2013 to develop a new funding source that would enable delivery of the desired programming for the facility.

Taylor used her role as advisory committee chair to collaborate with Bortel, school director Dr. Laura Stafford, a wide group of stakeholders and the upper administration to create a proposal for a major funding source through a new student media general fee. The fee was approved by the BGSU Board of Trustees in spring 2016 and has yielded about $200,000 over each academic year. It has reversed the losses and prevented further downsizing in the Office of Student Media that BGSU, like other universities, had experienced over the previous several years, Bortel said.

Because of Taylor’s passion and tenacity, BGSU will “walk boldly into a new era of communication.”