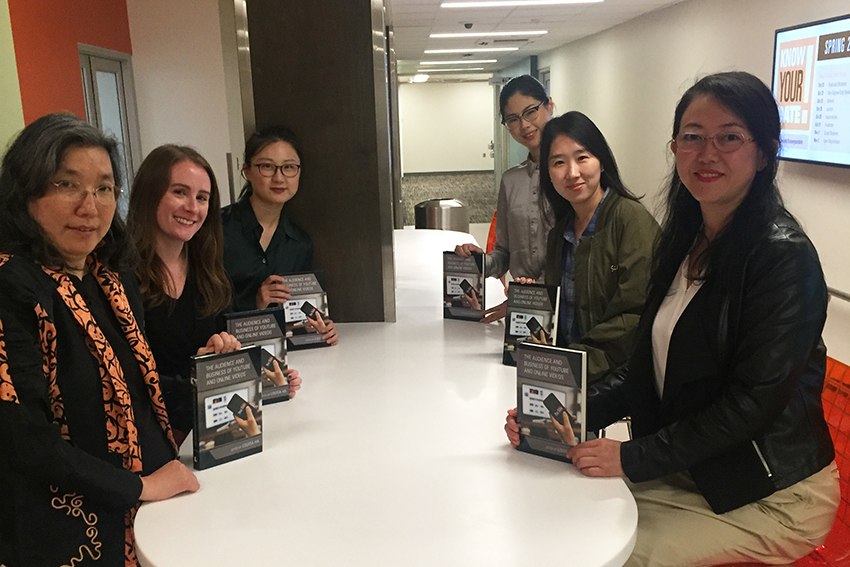 Louisa Ha (from left), Alyssa Fisher, Nicky Chang Bi, Fiouna Ruonan Zhang, Kisun Kim and Xiaoli Wen show copies of the book that was written based on a service-learning project they worked on for Google.

Based on information gleaned from nearly 700 individuals who answered questionnaires or participated in interviews and an analysis of most-watched YouTube channels, a Bowling Green State University professor and seven graduate students have written a book that analyzes the power of YouTube and online videos for businesses. The book describes how YouTube cultivates an entrepreneurial and promotional culture.

Dr. Louisa Ha, a professor in the School of Media and Communication and editor of “The Audience and Business of YouTube and Online Videos,” believes people need to realize the global importance of YouTube and that businesses must learn how audiences use online videos.

The research was born out of a service-learning class project with Google three years ago.

“They wanted to know what video device was more attractive to college students,” Ha said. “My ambition was to make it a bigger, broader project.”

With the help of 45 of her students, she and the graduate students conducted 294 computer-aided, self-administered interviews in the student union and received 353 responses to the online survey, as well as 23 in-depth follow-up interviews, all from BGSU students who are considered digital natives.

“It was a rich data set” that gave advertisers and researchers a glimpse about why this audience behaves the way it does, Ha said.

The study confirmed that most students use videos to learn about products, which potentially drives them to purchase. Eighty-three percent watch YouTube’s recommended videos. About 13 percent of the BGSU students who participated the study are also creators of online videos, in addition to being the audiences of YouTube.

“YouTube is a relatively recent phenomenon,” Ha said. “When the idea of webcasting worldwide was discussed in (my book) in 2006-2007, YouTube was not yet developed; there was no truly globally successful web platform to broadcast videos.”

Today, however, that has changed.

“YouTube is fun. It is a large platform that has grown — especially since Google purchased it — and is now larger outside of the U.S., in countries like India and Brazil, making YouTube a success as a global medium.”

Google plays an important role for YouTube, Ha said. Its search engine power makes YouTube the most-used video platform on the web. The book also looks at the coexistence of user-generated and professional content, which Ha said makes “YouTube a unique platform in the ever-expanding online video industry.”

In addition, the book explores the under-studied business side of YouTube, from product review videos, comments on videos, brand videos, sponsored videos, online video advertising and sharing to other social media. It also compares YouTube with other online video services such as Netflix and Hulu.

The number of channels on which to watch the videos is growing exponentially as well.

“It’s not just on computers and our phones, but on digital TV and gaming consoles. There are millions of channels to watch,” Ha said.

According to a September 2018 article on Forbes.com, “500 million hours of video are watched on YouTube every day and over half a billion internet users watch online videos every day on Facebook. And a large portion of them are looking to buy products or services, as 90 percent of online shoppers state that they find videos important as they are making purchasing decisions.”

Ha’s chapters include “YouTube as a Global Online Video Portal and an Alternative to TV,” “How Digital Natives Watch Online Videos: Digital Divide and Media Devices,” “Most Popular YouTube Channels,” and “Is YouTube Red the Ultimate Viewing Experience and What Is the Future of Online Video Audience Research?”

The book is available through Lexington Books.