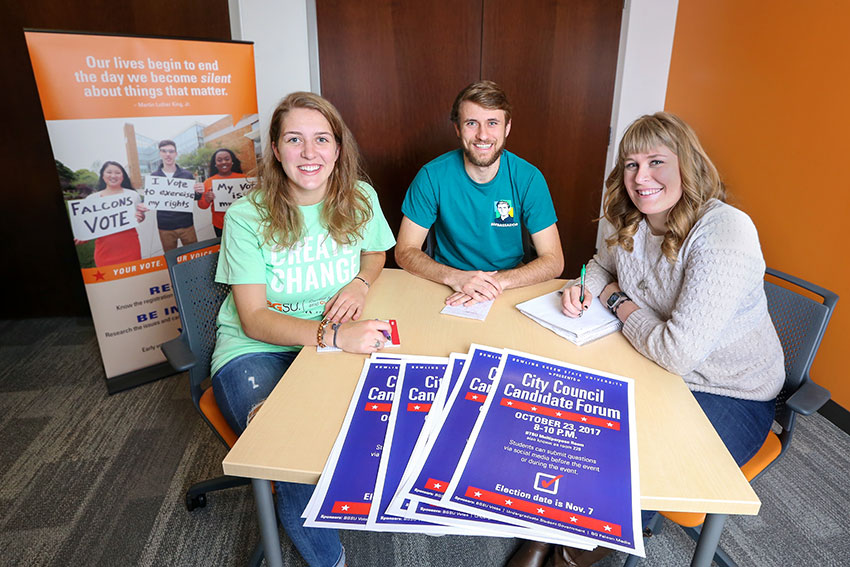 BGSU students and University community members will have another chance to meet Bowling Green City Council candidates and learn about the issues on the Nov. 7 ballot at an upcoming candidate forum on campus. Slated for 8 p.m. Monday, Oct. 23, in the Multi-Purpose Room in the Bowen-Thompson Student Union, the event so far has 11 confirmed candidate participants of the 12 running (there is also one uncontested seat), including all six at-large candidates.

One of the candidates is current student Hunter Sluss, looking to represent the first ward, and challenging six-year council member Daniel Gordon, who was elected while a BGSU student.

The Oct. 23 forum is completely student-led and is coordinated by a team of BGSU students dedicated to increasing awareness about the election and ultimately, voter participation, said senior Phillip Rich, a co-organizer of the forum. Rich is an Andrew Goodman Foundation ambassador/Vote Everywhere team leader with BGSU Votes, headquartered in the Center for Community and Civic Engagement. Senior Meg Burrell is co-ambassador.

Rich has worked with senior Holly Shively, the student director of BG Falcon Media, which comprises the two campus radio stations, BG 24 TV news, the BG News and the Key and Obsidian magazines, to line up sponsors and make the arrangements. Shively recently won a second Press Club of Toledo Touchstone Award, this time in the digital category for a piece she wrote for bgindependentmedia.org. about a BGSU student who has been an advocate for equality in her native Tunisia and on campus.

Shively and Hannah Finnerty, the editor-in-chief of the BG News, will serve as moderators for the forum.

Shively and Rich decided the forum was needed because a previous event held by the League of Women Voters took place during Fall Break.

“That was timed to give early voters a chance to see the candidates, but most students weren’t here for it,” Rich said. “We have 18,000 of the city’s 30,000 residents for about nine months of the year and a substantial portion of those register to vote in Bowling Green. It’s important that they also have the opportunity to learn about issues affecting them.”

The League of Women Voters has been very helpful in providing guidance and support along with some equipment, Rich said. “It’s been a great experience working with them and getting the forum organized,” he said.

Before the forum begins, candidates will be at tables where attendees can meet and mingle with them to talk about the issues. Attendees can submit questions, which will be gathered and delivered by BG 24 and BG News staff.

“We’d especially like to focus on the ‘town-gown’ relationship,” Shively said. “What are the biggest issues concerning BGSU and the city? How can we be good neighbors and how do we bridge the divide between the city and the University? A huge concern for students is housing — the quality and affordability of it.”

Rich said student housing is also a concern for non-University residents, especially on the east side of town, and he expects candidates will be asked to address that issue.

Although the forum is primarily “about and for the students,” Shively said, permanent residents are also encouraged to come. “They can get a whole other side of opinions by hearing the student perspective.”

In addition to BGSU Votes, sponsors of the event are the Center for Community and Civic Engagement, BG Falcon Media and Undergraduate Student Government. Shively and Rich have worked with USG representative Hannah Barnes.

Though they are in different majors and have different career goals, Shively and Rich share a commitment to engaged citizenship. She is majoring in multiplatform journalism with a minor in political science and plans to work either in investigative reporting or for a politically inclined magazine. He is an accounting major with a minor in the interdisciplinary Philosophy, Politics, Ethics and Law program, and plans to go on to law school.