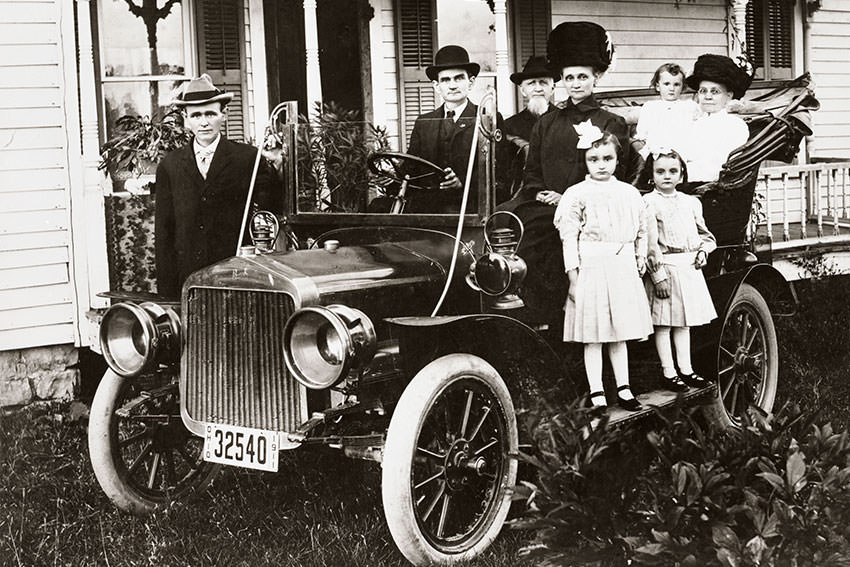 A 1911 photo of the Ottgen family in front of their home in Amboy township in Fulton County.  The Ottgens were German/Swiss immigrants to the region.

Incoming freshmen this fall will have the opportunity to learn about the timely topic of migration as part of their BGSU 1910: First-Year Seminars. Four new classes are being added to the list of the one-hour-per-week, one-credit courses, which are taught in small-group settings and engage students with faculty and classmates as an introduction to college.

The new 1910 classes to be offered at Bowling Green State University are: “Immigrant Ohio in the 21st Century,” “Changing Faces of Europe: Contemporary Voices of Migration,” “The Great Migration” and “Searching for Memories: Mexican (Im)Migration to Northwest Ohio.”

As much as migration and immigration are in the news today, the movement of people from place to place is centuries old. Migration is integral to the story of the human race and modern society. The new 1910 classes will allow students to choose an aspect of the topic that most interests them.

“More than 80 percent of our undergraduate students are Ohio-born and Caucasian,” said Dr. Vibha Bhalla, an associate professor of ethnic studies. “We want them to understand that the making of America has involved many different groups, and it’s happening still. Why, for example, did African-Americans migrate to Cleveland, Cincinnati, Youngstown? What are the cultural contributions and how did they affect those areas? Similarly, what have been the effects of Mexican Americans coming to our area in the last half-century?”

The courses are being developed with the help of funding from a National Endowment for the Humanities grant, “Understanding Migration: Local and Global Perspectives,” co-authored by Bhalla and Dr. Christina Guenther, an associate professor of world languages and cultures. BGSU was the only Ohio recipient of a new Humanities Connections grant.

The four seminars will be expanded into general education courses and may qualify students for a Migration Studies certificate for those who complete all four.

The new curricula made possible by the grant seeks to reframe the way students understand identity, community and society. As anti-immigration sentiment in nations with large migrant populations has seen an increase, it is important to understand the effects of migration: social, political, economic and environmental, say Bhalla and Guenther.

“Migration has become ever more urgent in Europe since the fall of the Berlin Wall,” Guenther said. “In the past two years, more than a million Syrian refugees have gone to Germany. There has been political upheaval in the Middle East, and environmental problems in other parts of the world have forced people to move. The situation in Africa is immense. It’s a very rich mosaic we’re weaving as a world culture.”

Also supported by the grant will be BGSU’s third annual “Immigrant Ohio” symposium in fall 2017, and a community film festival on the topic of migration. This year’s event, to be held Nov. 16, will focus on refugees in Ohio. It will feature an installation by video ethnographer Tariq Tarey of refugees from Somalia, Nepal and Bhutan.