Playful, enchanting, welcoming and ingenious in its design, the Glass Pavilion at the Toledo Museum of Art seems to defy gravity as it provides a showcase for the museum’s extensive collection of glass art objects. It is the topic of a new book from the museum, “The Glass Pavilion,” published in celebration of its 10th anniversary. Dr. Katerina Rüedi Ray, director of BGSU’s School of Art, has written one of the three essays in the book, on the architectural importance of the curving, transparent structure.

“It’s an absolutely beautiful book,” Ray said, “beautifully produced, with gorgeous photographs and a curved corner that echoes the design of the building.” 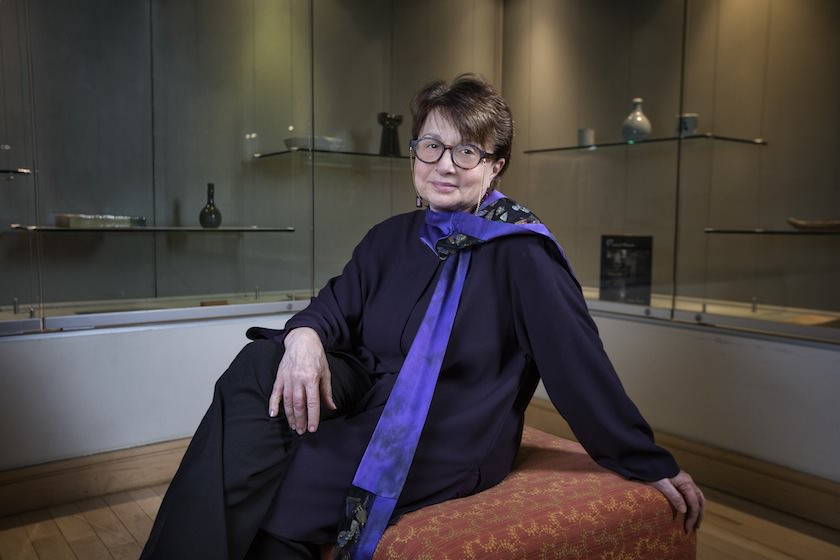 In “A Clear Vision: The Glass Pavilion in Context,” Ray brings her expertise in architectural design and theory to an examination of the building’s place in history and in its community. Designed by the Pritzker Prize-winning firm SANAA (Sejima and Nishizawa and Associates), it is the only glass museum actually made of glass. It is especially appropriate for Toledo, historically a center of glass production and innovation, Ray said. She notes that the Toledo Museum itself was founded by glass magnate Edward Drummond Libbey of Libbey Glass. The pavilion is also unique in that, in addition to being an exhibition space, it is also home to “hot glass” studios where visitors can watch glass artists at work and functions as a community space for social gatherings.

“It’s a major building in the history of modern architecture,” she said.

Architects Kazuyo Sejima and Ryue Nishizawa used the possibilities of glass to create an ephemeral atmosphere that is at once light and enveloping. Set among a grove of trees across from the museum, the pavilion appears to float in the green, its rounded simplicity in contrast to the angular stone forms of the 100-year old museum and its 1992 addition, the University of Toledo Center for Visual Arts, designed by Frank Gehry, another Pritzker Prize-winning architect.

Unlike its neighbors, the pavilion conveys a bit of mystery.

“One thinks that glass is transparent, but many layers of glass make a completely different atmosphere,” Sejima said. “Sometimes glass appears to be a very cold and hard substance, but in Toledo the glass is softer. Although the Toledo glass is very transparent, when you view the curved panels obliquely, the glass gradually changes.”

Transparency in architecture has denoted many things over time, Ray writes. England’s marvelous Crystal Palace of 1854 ushered in a new age of mass-produced industrial glass, which changed many aspects of social life, from store windows to picture windows to curved automobile windshields — one of the many innovations created in Toledo.

“If we want our culture to rise to a higher level, we are obliged for better or worse to change our architecture,” German poet and visionary Paul Scheerbart idealistically wrote in 1914. He called for the use of glass architecture “to take away the closed character from the rooms in which we live,” letting in the light of the sun and moon. In the 1930s, interest in the use of glass for buildings rose as part of “the new Utopian way of thought,” Ray said. For a world wracked by two grim wars and a depression, glass architecture represented a transparent society and a move toward peace and clarity. Soon thereafter, glass took on yet another meaning, with the wide adoption of Mies van der Rohe’s forbidding glass and steel skyscrapers, emblematic of progress and corporate wealth.

SANAA’s use of glass in the Glass Pavilion is neither utopian not corporate, Ray said, but rather sensuous and inviting. It also reflects traditional Japanese elements of minimalism and the relationship between form and function . . . “the independence of structure and wall, neutral and natural surface materials, and continuity between interior and exterior—between architecture and nature.”

Like the Crystal Palace in its time, it is also a marvel of engineering, according to Ray. “When I take my students to visit, they always ask ‘What’s holding up the building?’” she said. “There are hardly any columns. It’s a very complicated structural system, with its functional elements organic and hidden.”

Its super thin roof is packed with electrical lines, lights and wires; its basement half filled by the mechanical room and climate control ductwork. Sejima and Nishizawa also used the properties of glass to control the temperature, with the double-layered walls serving as insulation and the heat from the hot shops distributed in winter to warm the interior. Curtains made with aluminum particles shield those pieces of glass art that would be damaged by light.

“SANAA’s use of glass is amazing and delicate,” Ray said.

“The Glass Pavilion” also contains essays by former TMA glass curator Jutta-Anne Page, on the arrangement of the exhibits, and University of Toledo emeritus professor Dr. Richard Putney, a consulting curator at the museum, on the development of the idea for the glass museum and the commissioning process.

The book can be ordered through the museum store. It was recently reviewed in Urban Glass.

In addition to her essay in “The Glass Pavilion,” Ray’s recent work includes essays in two other books. The first is a co-authored piece about public art on university campuses, examining Iowa State University and the University of California at San Diego, and appears in “Remaking the American College Campus: Essays,” published by McFarland and Co. The second appears in “Third Coast Atlas: Prelude to a Plan,” scheduled to be released in June by Actar Publishers. Ray’s essay is on historical and contemporary issues affecting regional development in northwest Ohio. It is part of a comprehensive collection of writings that present in-depth analysis of the landscapes, hydrology, infrastructure, urban form and ecologies of the Great Lakes region by internationally renowned scholars, photographers and practitioners from the disciplines of landscape, geography, planning, and ecology as well as architecture. “Third Coast Atlas” was edited by a group from Harvard University, Toronto University and the University of Illinois at Chicago.