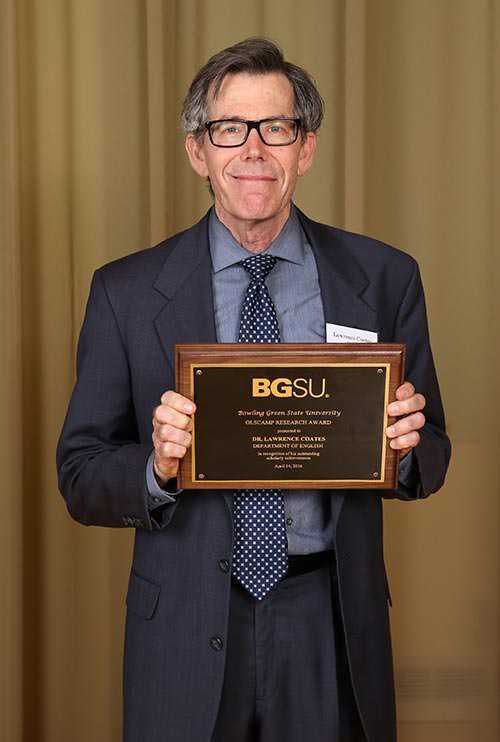 Reading Dr. Lawrence Coates’ fiction is to be immersed in another era, from the California of the first settlers to its vineyards during Prohibition and even the first dot-com bust of the 1990s. Coates achieves this resonance in part through assiduous research, making sure that all the subtle details render the sights, sounds, landscape and tenor of the times against which his stories are set.

His achievements were recognized with the 2016 Olscamp Research Award, presented to him at the annual Faculty Excellence Awards on April 14. Given annually by the Office of Sponsored Programs and Research to a faculty member for outstanding scholarly or creative accomplishments during the previous three years, the award includes a $2,000 cash prize and a reserved parking spot for a year.

Coates, a professor and chair of the English department, has received recognition for his work almost from the beginning. His first novel, “The Blossom Festival,” was chosen by Barnes and Noble for its 1999 Discover Great New Writers program, and he has continued to win kudos and awards ever since on both the regional and national scales. He has been the recipient of the Western States Book Award in fiction and a National Endowment for the Arts Fellowship in fiction.

“For the last 20 years, I have written fiction set in California that explores and interrogates the interrelationship of space and human desire,” he said.

The last three years have been especially prolific for him. He has published two novels and a novella and a number of short stories in literary journals.

In 2013, his novel “The Garden of the World” won the Nancy Dasher Award in Creative Writing from the College English Association of Ohio. His novella “Camp Olvido” won the 2015 Miami University Press Novella Prize and was chosen as one of the top three novellas of the year. And his short story “Bats,” a departure from his California-based work, won the prestigious 2013 Barthelme Prize for Short Prose, given by Gulf Coast literary journal.

His latest novel, also published in 2015, is “The Goodbye House,” published by University of Nevada Press, chronicling the displacement and dismay of a San José family set adrift when their prosperous life is shattered by the dot-com bust and 9/11.

“Camp Olvido” concerns people for whom prosperity has never come. As migrant farmworkers in a Central Valley workers’ camp, they are at the mercy of their employers when a child becomes deathly ill.

His award-winning short story “Bats,” a 500-word, incantatory meditation on the handbags of women in northwest Ohio, was selected for the Barthelme Prize by judge Robert Coover, an American author and professor in the literary arts program at Brown University whose work has appeared in the New Yorker.

Coates has given readings from his work across the country and been interviewed several times on National Public Radio programs in California. He serves as a reviewer and judge for numerous literary journals and competitions.

From 2011-13, he was director of the Creative Writing Program at BGSU, where he has taught since 2001. Before he began his academic career, he served in the U.S. Coast Guard and as a Merchant Marine.