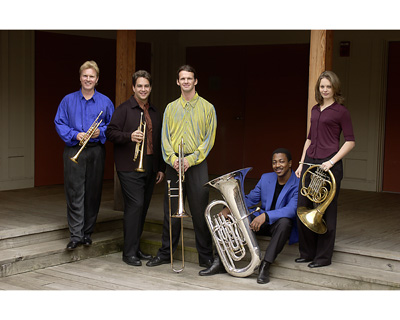 BOWLING GREEN, O.—Bowling Green State University celebrates the holidays with “The Sound of Christmas” with the Empire Brass and Elisabeth von Trapp, at 8 p.m. Friday, Dec. 3, in Kobacker Hall of the Moore Musical Arts Center. The performance is the Louise F. Rees Memorial Concert.

The granddaughter of Maria and Baron von Trapp, whose story inspired “The Sound of Music,” joins the critically acclaimed Empire Brass in a holiday performance full of the enchantment of the season. Singing professionally since childhood, von Trapp has enthralled audiences of all ages, from European cathedrals to the Kennedy Center.

The Empire Brass enjoys an international reputation as North America's finest brass ensemble, renowned for its brilliant virtuosity and the unparalleled diversity of its repertoire. The five musicians—all of whom have held leading positions with major American orchestras—perform more than 100 concerts a year, in cities like New York, Boston, Chicago, Washington, London, Zürich and Tokyo. They are equally at home in the majestically antiphonal works that Gabrieli composed for St. Mark's Cathedral in Venice and the exuberantly show-stopping tunes that Richard Rodgers and Andrew Lloyd Webber wrote for Broadway. The Empire Brass is the first brass ensemble to win the prestigious Naumberg Chamber Music Award.

The program will include works by Prokofiev, Mozart and Handel and will feature “Danse Arabe” and “Dance Russe” from a holiday favorite, “The Nutcracker” by Prokofiev. Traditional Christmas music such as “The First Noel,” “Angels We Have Heard On High,” “Silent Night” and “Joy to the World” will also be included in the program. The audience is encouraged to sing along.