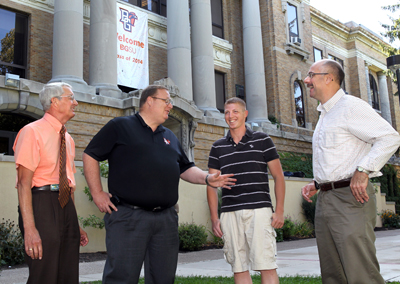 BOWLING GREEN, O.—Transitioning from life on a military base to life on a college campus can be a mission in itself.

Bowling Green State University’s efforts to ease the way for those who have served the country have earned it recognition as a military friendly school by G.I. Jobs Magazine. The honor places BGSU in the top 15 percent of schools nationwide.  BGSU has also been recognized by Military Times Edge in an article titled "School Support: 101 colleges that make veterans' success a priority." BGSU ranked 77th from more than 4,000 accredited institutions of higher learning when evaluated for financial assistance, academic flexibility, campus culture and support services.

The designations are the result of strong campus-wide support for the effort, said Duane Whitmire of Non-Traditional Student Services (NTSS), who oversaw the Student-Veteran Task Force that created the plan to better meet the needs and desires of student veterans.

Most notable is the creation of the NTSS, which has helped to consolidate student veterans’ services—once scattered across campus—into “one-stop shopping.”

According to the Assistant Director of Admissions David Rice, himself a veteran, the NTSS office has made significant strides. Rice expedites the admissions process and walks veterans through the steps toward becoming enrolled. “Rather than having student veterans find [the process] out on their own, NTSS tells them what they need to do,” he said.

“Post-9/11, the GI bill means more and more veterans coming back to college,” said task force Co-Chair Dr. Brett Holden, adding that with the withdrawal in Iraq and redeployment in Afghanistan, universities could see a further increase in student-veteran applications.

For many years, Holden has been helping administrators understand the experience of veteran soldiers transitioning to civilian life, facilitating outreach to veterans and their families, and teaching courses that move undergraduates at BGSU to research and assist this population.

“Veterans attempting to enroll in college can have hidden concerns,” said Holden, an assistant professor of theatre and film. "They can find it difficult to plan their life around school, with the chance they may be called back into service. They may be unwilling to risk investing in tuition, fees and books in case they are not able to complete the semester. Service members also often experience a financial drawback. Compared to what they may have made in their regular careers, combat pay can be substantially less.

“They are a naturally quiet group,” Holden said. “They will not complain, but they will just leave.”

Such circumstances prompted Dean of Students Jill Carr to commission the task force, charging it with developing a cost-effective action plan. Of the resulting 40 short-term and long-term recommendations, 90 percent entail no cost but reconfigure existing resources.

The many services BGSU has developed for veterans include waiving the application fee, as well as refunding the cost of textbooks if soldiers are facing deployment or are called up during the semester.

One of the visible changes is on the redesigned BGSU application. Thanks to Director of Admissions Gary Swegan, the application now includes a question about veteran status, which will help the University track them and offer services.

The Office of Transfer Evaluation assists service members with the transfer of previous college credits to BGSU. Rachel Schaeffer, director of transfer evaluations, says the University has recently become a member of the Servicemembers Opportunity Colleges consortium.

In addition, “BG is attempting to make efforts to change so student veterans can become BG graduates,” Rice said. “[The University] needs to be an active player with active duty personnel by bolstering online opportunities.”