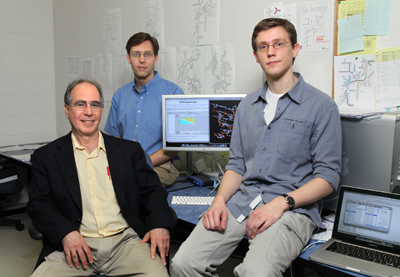 BGSU researchers (left to right) Drs. Neocles Leontis and Craig Zirbel, along with graduate student Anton Petrov, are at the nexus of molecular biology, chemistry, mathematics, and computer science that comprises the relatively new field of structural bioinformatics.BOWLING GREEN, O.—A group of Bowling Green State University researchers is immersed in a project that expands our knowledge base about genes. Their work translates existing information into a form that tells biologists more about the organisms they study.

Funded by a four-year, $1.3 million grant from the National Institutes of Health, Dr. Neocles Leontis, a professor of chemistry; Dr. Craig Zirbel, an associate professor of mathematics and statistics; bioinformatics doctoral student Anton Petrov, and statistics doctoral student James Roll are creating tools that will enable biomedical researchers to use the new knowledge for drug development and gene therapy, among many other applications.

They are collaborating with the international Protein Data Bank (PDB) and the Nucleic Acid Database (NDB), and with colleagues at Rutgers University.

Though the NIH funding is new, Zirbel and Leontis have been collaborating for about 10 years on the effort. Students have made significant contributions over that time; many are now in teaching and research positions at prestigious universities.

“Our research collaboration is training new scientist/scholar/teachers for the U.S. STEM work force—a top priority of the state of Ohio and the nation,” Leontis said.

It is now possible to “sequence” the DNA of a bacterium in a day, and a human being in a week, he said. But while those long chains of nucleotide bases contain the chemical “recipe” for each organism, they do not paint a three-dimensional picture of its actual structure. And it is the structure—how the sequences of RNAs and proteins twist, turn, fold and loop—that determines what the organism is and how it functions.

“There is a huge repository of gene sequences that have been completed, but it’s not directly useful to biologists,” Leontis said.

The BGSU team is focusing on ribonucleic acid (RNA). Leontis describes RNA molecules as “the software controlling how the genes are expressed to make proteins.”

“We’re developing software and data-mining tools that can be used to look for 3-D motifs, or repeating patterns, in 3-D structures and in sequences. Identifying and classifying these motifs will enable researchers to begin to predict their functions,” Leontis said.

With the assistance of previous students, Zirbel has written the code for searching RNA structures and sequences for motifs. “We plan to integrate these 3-D motifs into the PDB/NDB so that researchers can search any way they want to, and quickly,” he explained. “By observing commonalties, we can make predictions for structures and how they function.”

Petrov, a third-year Ph.D. student from St. Petersburg, Russia, is using the code to search for these motifs, which will be analyzed to determine if they are similar enough to reliably predict what function they control. “It becomes more precise as we accumulate more data,” Zirbel said.

The team will make the “motif atlas” available online through the Nucleic Acid Database and also provide interactive Web tools that researchers can use to search for and predict functions of RNA motifs.