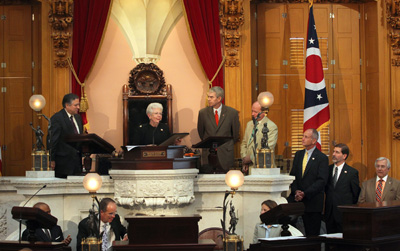 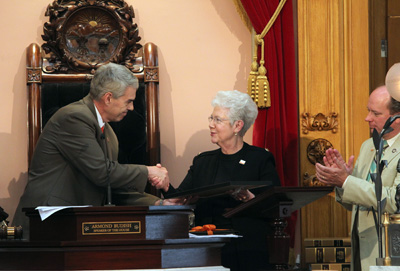 BOWLING GREEN, O.—This is a landmark year in the history of Bowling Green State University and Kent State University. One hundred years ago, the Lowry Bill was passed, creating two new teachers’ colleges in northern Ohio.

Both schools were honored during a luncheon and special program yesterday (May 19) at the Ohio Statehouse Atrium in Columbus. Attending the program was BGSU President Carol A. Cartwright, Kent State President Lester A. Lefton, Vice Chancellor John Brighton and Inter-University Council of Ohio President Bruce Johnson.

Since those early days, both schools have evolved significantly.

BGSU is now a university with nearly 20,000 students that come from 84 of Ohio’s 88 counties. With strengths in education, business, health and wellness, the environment and sustainability, and the arts, the University is nationally recognized for its commitment to undergraduate teaching.

“The leadership of Ohio has long understood that education is the way to prosperity. A century ago the governor and the Ohio General Assembly had the wisdom to create two new normal schools in the northern part of the state to educate more teachers. More than 160,000 graduates later, BGSU is still providing a great education at a great value,” said Cartwright.

The Ohio House of Representatives and Senate also presented resolutions recognizing both schools.