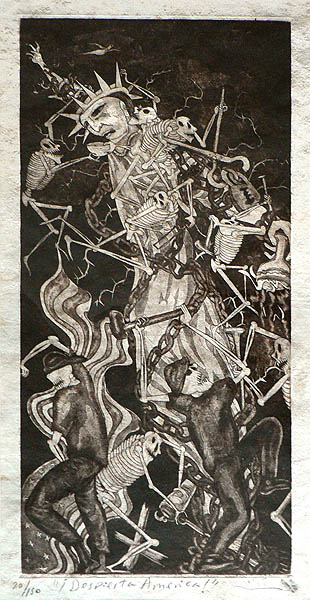 García is a professor at El Colegio de la Frontera Sur, Unidad Chetumal, Mexico, specializing in the fields of indigenous populations, public politics and migration. She has been investigating Nahua communities for more than a decade, analyzing the symbolic dimensions of migration experiences within the social system of Nahua communities as represented by indigenous artists.

De Jesús is an internationally recognized painter, printmaker muralist and illustrator in the Nahua community. His work has been exhibited throughout Mexico, the United States, Japan and Europe. He is best known for his work on bark paper, and the themes of social injustice and collective memory.  He is an active promoter of indigenous art and culture through numerous initiatives in Mexico and abroad.  His artwork will be on display during the conference.

The conference itself is a one-day academic forum starting at 8:30 that morning in 201 Union. Undergraduate and graduate students will present their research or artistic work on Latin American and Latino/a studies, as well as in American culture studies and Canadian studies. The goal is to contribute to the understanding of the interdependencies, commonalities and differences across the Americas.

The event is co-sponsored by the Ethnic Cultural Arts Program, the Institute for the Study of Culture and Society, the Center for Undergraduate Research and Scholarship, the departments of History, Romance and Classical Studies, Ethnic Studies, and Political Science, and the American Culture Studies Program.