BGSU to host author of book on tea, espionage 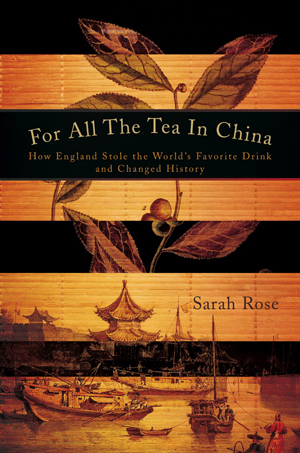 BOWLING GREEN, O.—Behind every seemingly innocuous cup of tea lies a tale of intrigue, stolen trade secrets and unscrupulous botany. Writer Sarah Rose, author of “For All the Tea in China: How England Stole the World’s Favorite Drink and Changed History,” will share the results of her research into the subject during a visit to Bowling Green State University this week.

Rose will give a free reading at 7:30 p.m. Thursday (April 8) in Prout Chapel. BGSU is also hosting a tea with the author at 3 p.m. Friday (April 10) in the East Hall Lounge.

“For All the Tea in China” tells the story of Robert Fortune, a Scottish botanist, gardener, plant explorer—and industrial spy for one of the great acts of corporate espionage in history. In 1848, Fortune was appointed by the East India Co. to secretly infiltrate forbidden Chinese territory and obtain information about the manufacturing and horticulture of tea. Having lost its monopoly on the tea trade, the East India Co. realized the only way to make recourse was to establish its own tea plantations in the Himalayas of British India. So, dressed undercover as a Chinese Mandarin, Fortune traveled into the interior of China, having near deadly encounters with pirates, thieves and his own bodyguards to reach the epicenter of tea production, the secluded hills of Wu Yi Shan.

A Chicago native, Rose now lives in New York but spends most of the year in the Pacific, Indian and East Asian regions. She received her undergraduate degree in English literature from Harvard University, where she was the arts editor for the Harvard Crimson. She received her Master of Humanities as well as several university fellowships from the University of Chicago. She began her career as a stringer and travel writer in Hong Kong during the 1997 handover to China and now writes about food and travel for magazines such as Men’s Journal, Brides and Bon Appétit.