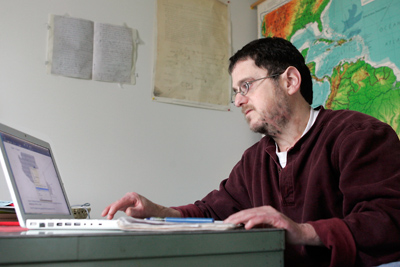 Dr. Amilcar ChalluBOWLING GREEN, O.—It is hard to imagine today that during the mid-18th century Mexico was in about the same state of economic and human development as today's developed nations. What happened to hinder its development while others were surging ahead?

Dr. Amilcar Challu, an assistant professor of history at Bowling Green State University, has received a $50,400 fellowship from the National Endowment for the Humanities to study the historical origins of Mexico's underdevelopment from the vantage point of how the country coped with food crises in the decades preceding its independence. The funding for “The Political Economy of Hunger in Bourbon Mexico, 1730-1820” will enable him to focus entirely on research and writing next academic year.

While there were many factors involved in Mexico’s failure to develop, Challu argues that a “major decline in accessibility to food” is a key element. This brought about a decline in living standards, an unprecedented rise in inequality and a “political and socioeconomic crisis” that still reverberates in today's Mexico.

Historically, much land had been communally owned by indigenous people, and commercial, private agriculture was relatively marginal, Challu explained. But over the 18th century, this balance changed. Population grew, and so did mining and other economic activities that increased the demand for grain. Corn was both the staple in the Mexican diet and the fodder of mules, which at that time virtually powered the entire economy, from grinding ore to extracting silver to moving freight across Mexico's mountainous geography. As a result, the growth in the demand for food outpaced supply.

Prices went up and commercial agriculture became very profitable. Wealthy landowners grabbed the best lands, displacing self-sufficient, small producers. Markets developed to get food to consumers. This was good for relatively affluent consumers and commercial farmers, but put pressure on the impoverished people in rural areas who increasingly relied on the market to acquire the food to which they were traditionally entitled. When a threat to food security was perceived, such as a summer drought or a frost in October, regions tended to hold onto their food supplies, prices spiraled up and the entire supply network was affected. Food shortages led to disease and further deterioration of the population.

This confluence of events increased inequality and restrained Mexico from capitalizing on the opportunities for development that other countries were starting to experience, Challu said. Around 1800 and for the first time in its history, he concluded, Mexico had lower standards of living and higher inequality than Western Europe, and this story is intrinsically connected to dramatic changes in access to food in the 18th century.

Challu sees parallels today with the effects of trade agreements such as NAFTA, which, while benefitting some sectors of a population, can be devastating to others. Similarly, the recent competition in the use of crops for food or energy use, and the rise in grain prices that has triggered, reverberates with the historical experience. “Present-day issues prompted me to talk about this in historical terms,” he said.