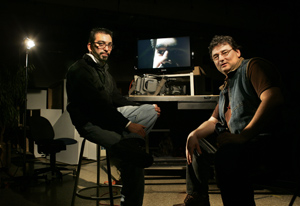 BGSU filmmaker Angel Vasquez (left) and composer Mihai Popean discuss the score for Vasquez’s upcoming documentary.BOWLING GREEN, O.—In a darkened room at Bowling Green State University, as silent images of dramatically lit, black and white close-ups of a man’s face appear on a monitor, the rhythm and soundtrack of a film are conceived. Intently watching the screen are filmmaker Angel Vasquez, an assistant professor of theatre and film, and Mihai Popean, a doctoral student in composition.

The two are beginning a new collaboration, this time on a feature-length documentary about a well-known local crime case. “Man of God” is a story of tragedy and salvation. The main character “may be pardoned for his crimes by the state but he may never be forgiven for his sins,” Vasquez said. “This is a very personal film for me in some ways.”

Viewing the images, which have been shot by cinematographer Jose Cardenas, a lecturer in the telecommunications department, is a first step in Vasquez’s imparting his vision and aesthetic for the film to Popean, who will compose the score. “When we began working together, we had to define the words we used when we talked about the sound and the film,” Vasquez said.

“But now we speak the same language,” Popean added. “Looking at the lighting, I can hear shades of music. It’s the lighting that creates sonic impressions, and there’s a rhythm inherent in the shot pacing.”

A native of Romania, Popean came to BGSU to study composing with Dr. Marilyn Shrude, Distinguished Artist Professor of composition. In his wide-ranging career, he had worked in radio and as a studio engineer and producer, and had a long affiliation with a theatrical company. He had also provided music for films, but had never worked so closely with a director until he met Vasquez.

That the two artists found each other was kismet. “Making films is about working with people you get along with,” Vasquez said. “We hit it off artistically immediately. We have common personal goals.”

“Angel has a very special sense of where music goes in a film,” Popean said. “He has a sense of the structure of music and of timbre—I’ve worked with people who don’t have that, and it’s difficult.”

Though as the director he determines the aesthetic and themes of the film, Vasquez said he always tries to provide options for the composer and editor.

“Documentaries are harder because you have to capture the sense of reality and authenticity that people can relate to,” Popean observed.

This new work will be quite different from their previous collaborations. The last piece, a 10-minute documentary called “The Toledo Hockey History,” was sponsored by WGTE-PBS and The Blade to commemorate the opening of Toledo’s new hockey arena. Popean composed the score, which included popular music from the various eras of Toledo’s hockey past. “He provided the sonic narrative,” Vasquez said.

Vasquez always strives to provide opportunities for his students to participate in his many film projects. Several student filmmakers worked on an earlier documentary, “The Turning Point: School Reform at Waite High School,” which followed the progress of Bowling Green’s GEAR UP project in East Toledo schools.