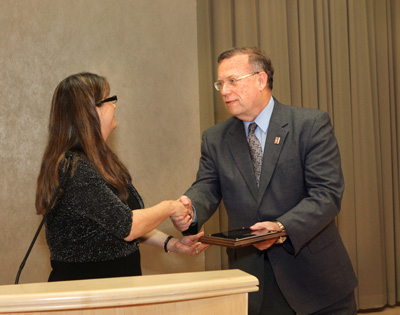 BOWLING GREEN, O.—In his 30 years in Bowling Green State University’s College of Musical Arts, Dean Richard Kennell has been a driving force behind tremendous growth and change. In recognition of his myriad contributions to the college and the University, Kennell received the Lifetime Achievement Recognition from Faculty Senate March 22 and with it, a $1,000 cash prize.

“His activities over these 30 years have resulted in significant advances for the college,” said Dr. Vincent Corrigan, a professor of musicology, composition and theory. In 2005, the college added a doctoral program in contemporary music, making it one of the only institutions in the country with such an offering. “This degree is the most important academic advance for the College of Musical Arts since the approval of graduate study in music in the late 1960s, and without his support it would not have been approved and probably would not even have been developed,” Corrigan asserted.

The college enjoys a robust enrollment, thanks in large part to an innovative method of graduate recruitment Kennell developed. The system has attracted national attention, and Kennell is frequently invited to speak at major conferences and is a well-respected authority on the subject, noted Distinguished Artist Professor Marilyn Shrude. On another level, “I often see him going out of his way to talk with parents and those auditioning to help them feel welcome in what can be an overwhelming and complex experience,” she added.

International recruitment has also been strong, his nominators noted, and Kennell was instrumental in establishing a summer program with Ionian University in Greece, allowing Bowling Green faculty and students to teach and learn there and students from Corfu to come to BGSU.

But perhaps he is most known for his promotion of collaboration among the arts. He was a founder of the Arts Roundtable, which unites art leaders at BGSU and around northwest Ohio, wrote Dr. William Mathis, chair of the music performance studies department.

Kennell’s extensive work with colleagues in the School of Art, theatre and film and even the College of Business Administration have helped create the Center of Excellence in the Arts that BGSU has become, his nominators agreed.

His “passion, discipline, resourcefulness and ingenious ideas, not just in theory but put into practice,” have earned him the respect and support of his peers, said Dr. Alan Smith, a former associate dean.