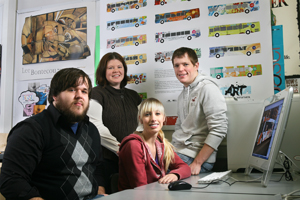 BOWLING GREEN, O.—A breath of fresh air is blowing through the freezing streets of Toledo these days, thanks to the artistic vision of Bowling Green State University students and the poetry of area youth.

Captured on city buses, colorful scenes and poems express the theme of “Restore Planet Earth,” focusing on clean air. The Art in TARTA program, sponsored in part by TARTA and the Arts Commission of Greater Toledo, covers buses with designs by BGSU graphic design students, paired with poetry from participants in the Young Artists at Work summer program.

This year’s buses were unveiled and the poems shared at a reception held by the arts commission at the Parkwood Gallery in Toledo.

“It was great to meet the students who wrote the poems,” said Erin Kosier, a senior from Toledo majoring in graphic design. Two of her designs were chosen for the buses, a spring-themed, light blue one with dandelions and kites blowing in the breeze, and a fall-themed design of a swing and falling leaves that says “Life begins and ends with one breath of air.”

This was the first year BGSU students participated as part of a class instead of an independent study, said Amy Fidler, a graphic design instructor. “It was very special to have just seven students in a class.”

“This was a different kind of class because it was a real-life project,” Kosier said. “Our work was being sent out for the world to see, and the production deadlines were very important. We had printers waiting for us to get work to them.”

Fidler collaborates with designer Mary Dawson, who oversees coordination with Off Contact, the Toledo company that prints the designs and applies them to the buses.

“There were a lot of obstacles,” Kosier said. “We had to design around the shapes of the bus. For example, we had to make sure any lines of type didn’t fall into a divot or they would be unreadable. We also had to design around the windows because we could only cover a portion of them. It was great to talk with the printers. They’ve been doing this project for years and they were always patient and helpful.”

Kosier said it was interesting to see fellow students’ interpretations of the poems. Senior graphic design major Michael Gump, for example, used the same “life begins” poem but superimposed a stylized image of lungs over a grid of Toledo streets in an angular design.

With this and other city-University art partnerships, “Toledo’s becoming more artistic. This is very exciting to me,” said Kosier.