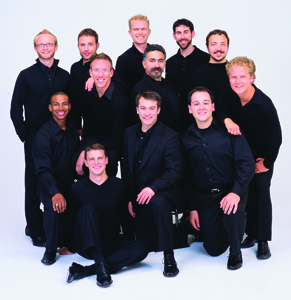 BOWLING GREEN, O.—The internationally acclaimed vocal group Chanticleer will be the final performers in the 2009-10 Festival Series at Bowling Green State University’s College of Musical Arts. The all-male ensemble, known around the world as an “orchestra of voices,” is making its second appearance at BGSU.

The concert will be held at 8 p.m. March 3 in Kobacker Hall of the Moore Musical Arts Center. The first half of the program, titled “In Time of …” will feature works by Orlando Gibbons, Sethus Calvisius, Giovanni Pierluigi da Palestrina, Jean-Yves Daniel-Lesur, Guillaume Dufay, Clément Janequin, Gyorgy Ligeti, Chen Yi and Steven Sametz, who composed the title piece of the performance. The second half of the program will include works by Michael McGlynn, Mason Bates, Manuel Sanchez Acosta, Carmen Cavallaro and Moises Simons.

Based in San Francisco, Chanticleer is renowned for the seamless blend of its 12 male performers, ranging from countertenor to bass, as well as the group’s original interpretations of vocal literature varying from Renaissance to jazz and gospel to venturesome new music.

Inducted into the American Classical Music Hall of Fame in 2008, Chanticleer was also named the 2008 Ensemble of the Year by Musical America; the New Yorker magazine dubbed it the “world’s reigning male chorus.” Chanticleer has performed at prestigious festivals in France, Germany, Poland and Latvia. The group released a CD in fall 2008 titled “The Mission Road” featuring music from California’s vibrant mission period.