Holiday Traditions in Other Countries 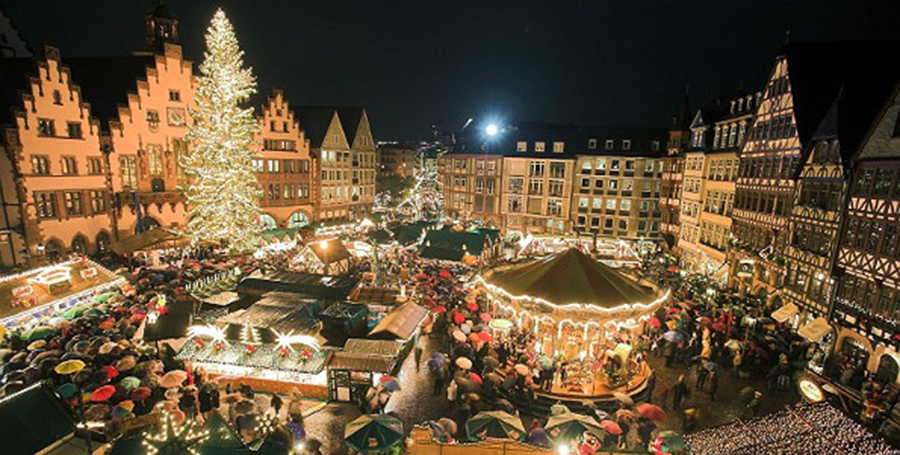 We are familiar with the American traditions of the holiday season with Christmas trees, Santa Claus, shopping, decorations, and special foods.  It is interesting to read about how others around the world celebrate the holidays.  A group of seven students from Puerto Rico are attending BGSU for the Master of Accountancy program.  Two of them share their country’s holiday traditions in a related story. (Read more ...)

Besides international students coming here to BGSU, the College also has a large number of students studying abroad.  Two of those students - Carly Roden, studying in France at the University of Strasbourg, and Julie Thielman, studying at Hong Kong Baptist University -  share their first holiday experiences in a foreign country.

Strasbourg, France, is known all around the world as the Capitale de Noël or the Christmas Capital. It received this title in 1570 when it hosted the very first Christmas market in Europe. It was called "Christkindelsmärik" or market of the Infant Jesus. It is famous for its hot wine, food, and homemade collectibles. While studying here I have gotten a firsthand experience with the markets and all they offer. The markets opened on Friday the 28th of November and will stay open with almost 300 booths in 11 spots around the city until the 31st of December. (The Christmas Market is pictured above.) 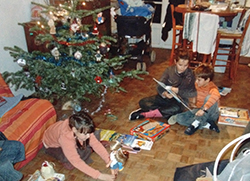 While living in Strasbourg, France, I have had the chance to integrate with several French students and learn about their personal holiday traditions. I recently interviewed my friend Marine Marmoret, from Lorient, France. She has lived in Strasbourg since October studying at École de Management. For her holiday she goes to her grandma’s house where the whole family gets together to open gifts on the 24th of December. As seen in the picture, her family decorates a tree with guirlande (garland) along with colorful lights. Along with this, she says they have a fire going in the fireplace. As far as food, they have foie gras, which is a food product made of the liver of a duck or goose. Along with this main course they also have coquille St. Jacques (scallops), champagne, rôti de biche (roasted doe) and cake with ice cream. But she warns that they eat the cake while they open presents so the cake is never the main focus of the night! Strasbourg and all those who live here are filled with holiday cheer starting at the very end of November and going past Christmas Day itself. It is full of its own holiday traditions.

Like many other cultures in the world, Hong Kong celebrates both worldwide and local holidays, though they have a distinct emphasis on their local traditions.

The only worldwide holiday that is celebrated widely here is Christmas, and even then it is not celebrated in such a bold manner as in the States. This holiday is left over from the nearly 160- year British rule of the Hong Kong people. Due to lack of space and storage, the residents of Hong Kong celebrate with neither Christmas trees nor decorations.  Really, in general, the holiday is celebrated rather differently. It is not characterized by the exchanging of gift as is typical with American and European celebrations, but with the gathering of people for a day. Younger citizens typically gather to hangout in entertainment parks, whereas, the older population spends the day shopping. Though not as decorated, it is still a jolly winter holiday.

Though Christmas may be far less lavish in Hong Kong than it is in the States, the local holidays of the Hong Kong people make up for the lack of ceremony and decoration. Typical holidays in the fall include larger festivals like Mid-Autumn Festival, to smaller ones like the Cheung Yeung Festival. The Mid-Autumn Festival is a two-day holiday for family, meant as a time to gather together and celebrate that you have each other. This holiday stems from an ancient Chinese fairy tale, depicting a couple torn apart as the girl is sent to live on the moon after she receives deity status and her husband does not. After years of longing for each other a rule is made, they can see each other once a year, on the first day of the Mid-Autumn Festival. It is celebrated not only with family gatherings, but with incense dragon dances in the streets and a special dessert called the moon cake- traditionally made with lotus or sesame and egg yolks.

Other smaller festivals include the Cheung Yeung Festival and Buddha’s Birthday. The Cheung Yeung Festival is to honor the elderly of the community, and the day is spent hanging out with them, like walking through parks, and working on chores around their house. Buddha’s Birthday is celebrated because the Hong Kong people believe that Buddha was born on their island all those years ago, despite Mainland China saying otherwise. Hong Kong celebrates this holiday to remind its people where Buddha is really from. Together these holidays work to show the great importance of family in this culture.