The Holidays in Puerto Rico are Much Anticipated and Enjoyed

Written by Pablo Santiago and Roberto Hernández De Jesús, students in the Master of Accountancy program

The Caribbean Island of Puerto Rico is known for year-round festivities and Christmas is the biggest of them all. Christmas in Puerto Rico basically starts on Thanksgiving and doesn’t end until January 6, The Three Kings Day. Family and friends gather to share their joys and their wishes for the New Year. It is a time of union and happiness.

In Puerto Rico we have our own version of Christmas caroling called “parrandas.” In our parrandas, groups of people with Caribbean influenced instruments (e.g. congas, bongos, güiro, maracas, timbales) unexpectedly –usually uninvited – visit their loved ones homes in the middle of the night and start playing native Puerto Rican Christmas music. The musicians will keep playing outside a house until the residents let everyone in. Once inside, the music keeps going and usually there is food for the entire guests; during Christmas basically everyone has food ready for these unexpected “parrandas” because you never know when you might get one. The visit lasts for a little while (1-2 hours) then the “parranda” moves to other houses with the purpose of visiting multiple houses in one night before dawn. 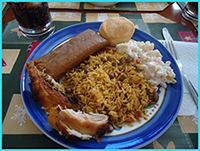 In Puerto Rico a certain type of platter is served during Christmas time. This plate usually consists of pork, accompanied by rice and pigeon peas, mashed potatoes (or macaronis), and “pasteles” which is a Caribbean food similar to Tamales in Mexico.

The pork is slowly cooked in a homemade oven where it slowly rotates for a couple of hours over coals until the meat inside becomes tender and the exterior becomes crisp and crunchy. This crunchy exterior is called “Cuerito” and is a known delicacy for its salty and crunchy qualities.

Traditional Puerto Rican Christmas desserts like arroz con dulce, tembleque, and coquito give boricuas a separate identity from the rest of the world. Before Puerto Rican traditions became influenced by American culture, Christmas Day was a joyful day and some gifts were received at some houses, but not from San Nicolás (Santa Claus). Our holiday gifts used to be from Los Reyes Magos (Three Kings).

Christmas time ends in January with the celebration of Las Fiestas de la Calle San Sebastian (Saint Sebastian Street Festival). This is an art and music festival where the whole town of Old San Juan gets closed down to traffic and becomes a venue for the festival. Locals and tourists from all around the world come to enjoy the art exhibitions and the music exposed during this four-day festival. This is the biggest festival of the year on the Island with approximately 240,000 people visiting Old San Juan daily.