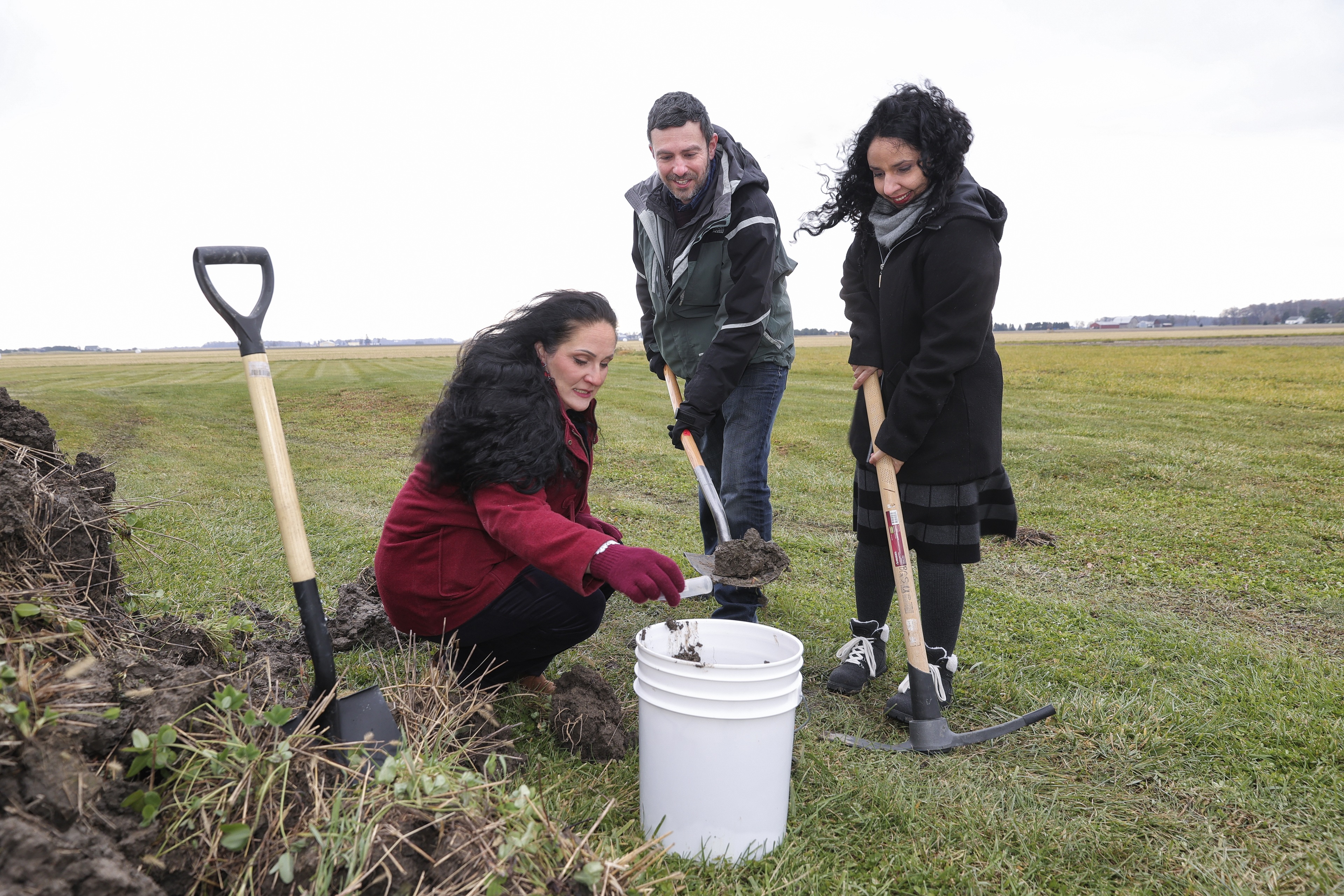 The issue of harmful algal blooms (HABs) in the Western Lake Erie Basin is something that Bowling Green State University scientist Dr. Kevin McCluney thinks of as a “wicked problem” — a complex, multi-layered issue with no magic solution.

While there is no silver bullet for solving the issue, a team of BGSU researchers led by Dr. Angélica Vázquez-Ortega, an assistant professor in the School of Earth, Environment and Society, is aiming to help find a more sustainable way for farming practices with less impact on watersheds.

Joined by McCluney and Dr. Shannon Pelini, both associate professors of Biological Sciences, the BGSU team received a $686,000 U.S. Department of Agriculture grant to study and reduce agricultural runoff, part of a collaborative, multidisciplinary effort to improve water quality and gain a better understanding of how the Lake Erie watershed operates.

Previous research shows a strong correlation between HABs and excess nutrients – specifically phosphate – in the watershed from agricultural runoff, but with nearly 77,000 farm operations in Ohio, according to USDA data, the industry is an important part of the state’s economy.

“We can’t just stop farming —you’d be destroying the livelihoods of probably millions of people and reducing our production of food and other products,” McCluney said. “So, it makes for what I would call a wicked problem: How do you meet the sustainability challenge?”

The BGSU researchers will be studying soil health in various fields within a pilot watershed, hoping to learn which farming practices can reduce nutrient runoff to achieve 40% phosphorous reduction.

Through obtaining soil data such as phosphorus or nitrogen levels per acre, the BGSU scientists can observe which areas are above recommended nutrient values, and more importantly, which areas are not in need of any intervention.

By examining the health of the soil, the end goal is to help farms gain in-depth knowledge and improve overall water quality by using practices like subsurface nutrient application, a process by which fertilizer is applied slightly under the surface, not on top, reducing runoff.

“Then you are actually putting in just what is needed instead of a general recipe,” said Vázquez-Ortega, whose research specialty includes studying biogeochemical processes in soil systems as it relates to water quality.

The process of applying nutrients below the surface is a more effective way of ingratiating them into the soil, thus reducing dissolved nutrients from making their way through large pores in the soil and into drain pipes. Further, while fertilizer is typically applied to an entire field, soil data can better inform decisions about how and where to apply it.

“If you have farmland, you might have a hotspot here, but a depletion over there, but another hotspot over here, and another depletion there — so instead of putting the same amount across the board, now the farmer knows with the nutrient management plan that he doesn’t have to put nutrients in the hotspots,” Vázquez-Ortega said.

“He can only put nutrients where there are depletions, so he can put fertilizer based on where it is geographically mapped in the farm.”

After using farming practices such as variable-rate fertilization, growing cover crops during the winter months and subsurface nutrient application, researchers will then examine the effect on excess nutrients traveling downstream.

“We’re going to be monitoring at the watershed outlet to see if the implementation of the practices are decreasing the export of nutrients at that point,” Vázquez-Ortega said. “It’s not the same as studying the whole Maumee River, but we have to start somewhere.” 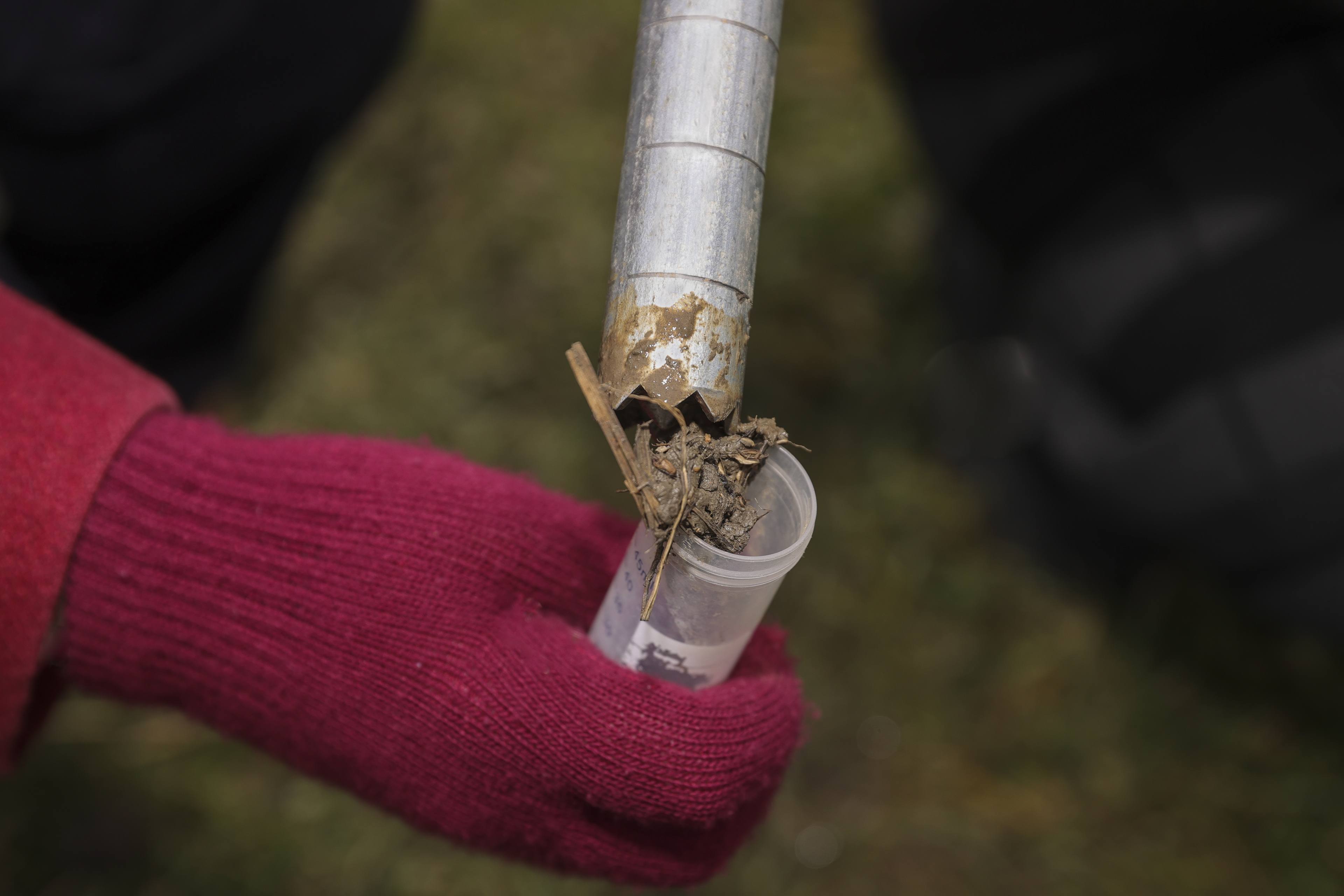 BGSU researchers are studying soil health as part of statewide research into watersheds, specifically hoping to learn which farming practices can achieve a 40% reduction in phosphorous runoff. (Craig Bell / BGSU)

Pelini’s description of her profession often comes with a disclaimer. She jokes with people to just hear her out — she studies bugs for a living.

Pelini’s area of study is unique, but one that can provide a window into the bigger picture of soil health, as invertebrates can tell researchers quite a bit about an area’s biodiversity. The presence of multiple species of ants, for instance, can be a good indicator that the entire system is functioning well, while seeing only one type that is an invasive species can indicate the opposite.

Additionally, there is always a great deal of bug activity happening below the surface level that is imperative for the overall health of the soil — and therefore the crops that depend on it.

“Those bugs that live in the soil, millipedes in particular, don’t get a lot of credit for controlling the nutrients that go into the roots and the plant, but bugs that are living in the soil are really doing a lot of the heavy lifting of breaking down the roots of those plants that remain in the soil after the crop is harvested,” Pelini said. “Which bugs are on these farmlands — especially the ones that do the heavy lifting of moving things through the soil — can be a really good indicator of how well that soil is functioning and producing crops.”

McCluney brings expertise in isotope ecology, which will manifest in this project by collecting soil and water samples and looking at phosphate isotopes in soil and water, which work like a fingerprint to understand how phosphate moves through both soil and water.

The practice will monitor how much phosphorus in water is coming from inorganic fertilizer and how the levels change based upon certain practices such as injection of fertilizer or cover crops. It will also examine how well phosphorus is recycled and kept in the soil.

As physical, biological and chemical aspects all contribute to keeping soil productive for growing crops, McCluney said the mix of disciplines will contribute to the ultimate goal of being more sustainable.

“In my view, it goes beyond soil productivity to also simultaneously examine nutrient runoff, storing carbon from the atmosphere and supporting biodiversity of soil organisms,” McCluney said. “Soil health is really dependent on who you ask, but having healthy soil really depends on having sustainable aspects that go beyond how fertile it is and how much it can produce crops. It’s really about long-term sustainability for those soils.”

Different teams at several universities are conducting different types of research within the project, but the common thread is the understanding that the problem can only be solved by contributions at every level, ranging from landowners to researchers to state government.

The exciting part, Pelini said, is that the sentiment is often shared by farmers who are more than willing to help find a real solution to the Lake Erie issue.

“One of the really cool things about this project in particular is, yes, it is academic research, but it’s very much shared by farmers and landowners who are excited to have us work with them and more than willing to participate,” she said. “The algal blooms aren’t anyone’s fault. There isn’t anyone who should be blamed, so this project makes a really big step toward collaborating together to resolve this issue.”

The issue of algal blooms is incredibly complex, and the process of collaborating at this scale is time consuming — but the effort is worth everyone’s time, Vázquez-Ortega said.

Collaboration, she said, is the best route to sustainability.

“It’s the only way we can solve the Lake Erie problem,” Vázquez-Ortega said. “It’s exciting. It takes longer because you have to coordinate with so many people to do the job, but you have a better understanding of the whole system when you have an ecologist, a geochemist, a hydrologist, an economist — and we’re going to have all of those people in the team involved in trying to answer a very complex environmental issue.”