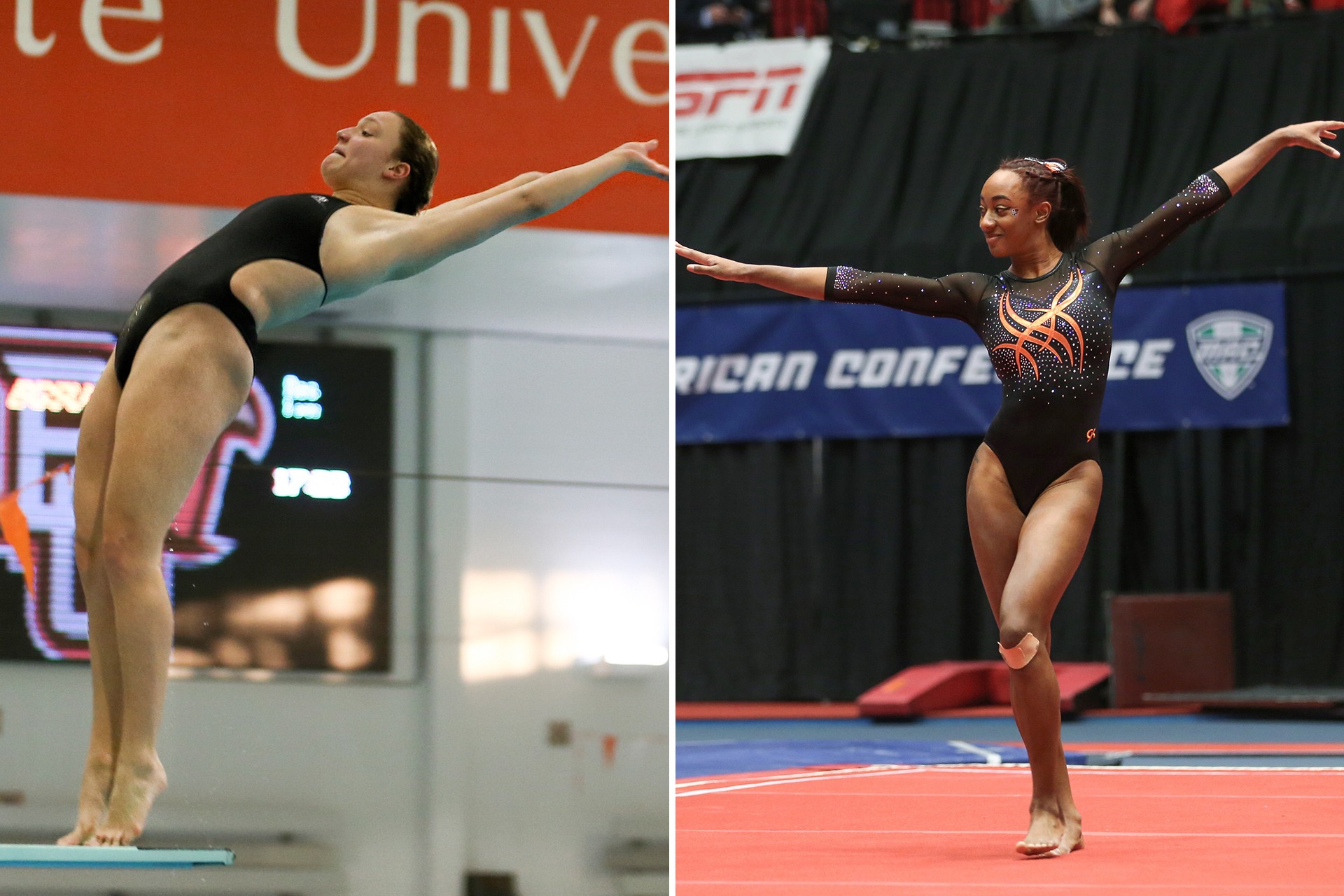 Diver and gymnast represent the best of Falcon Athletics 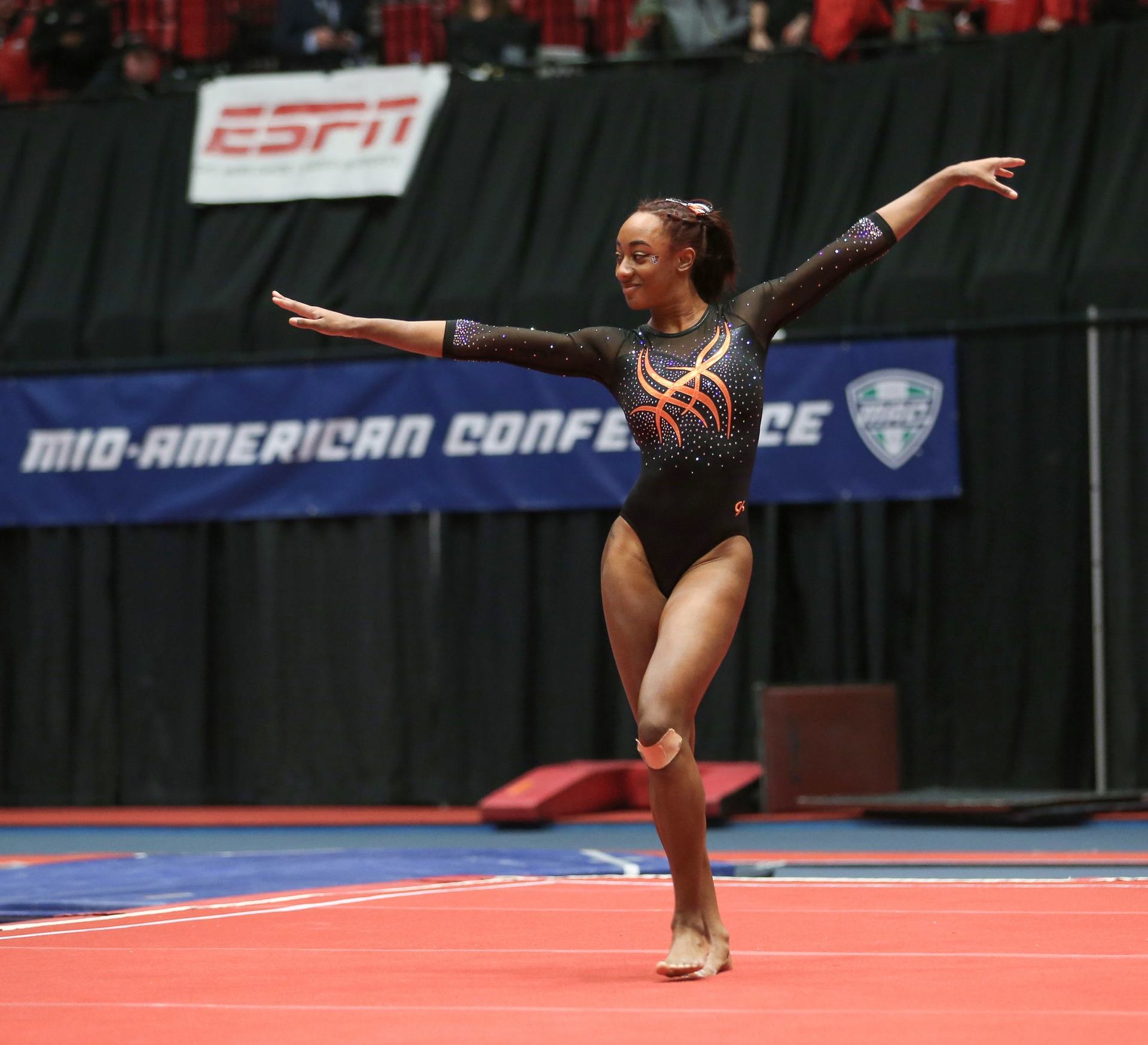 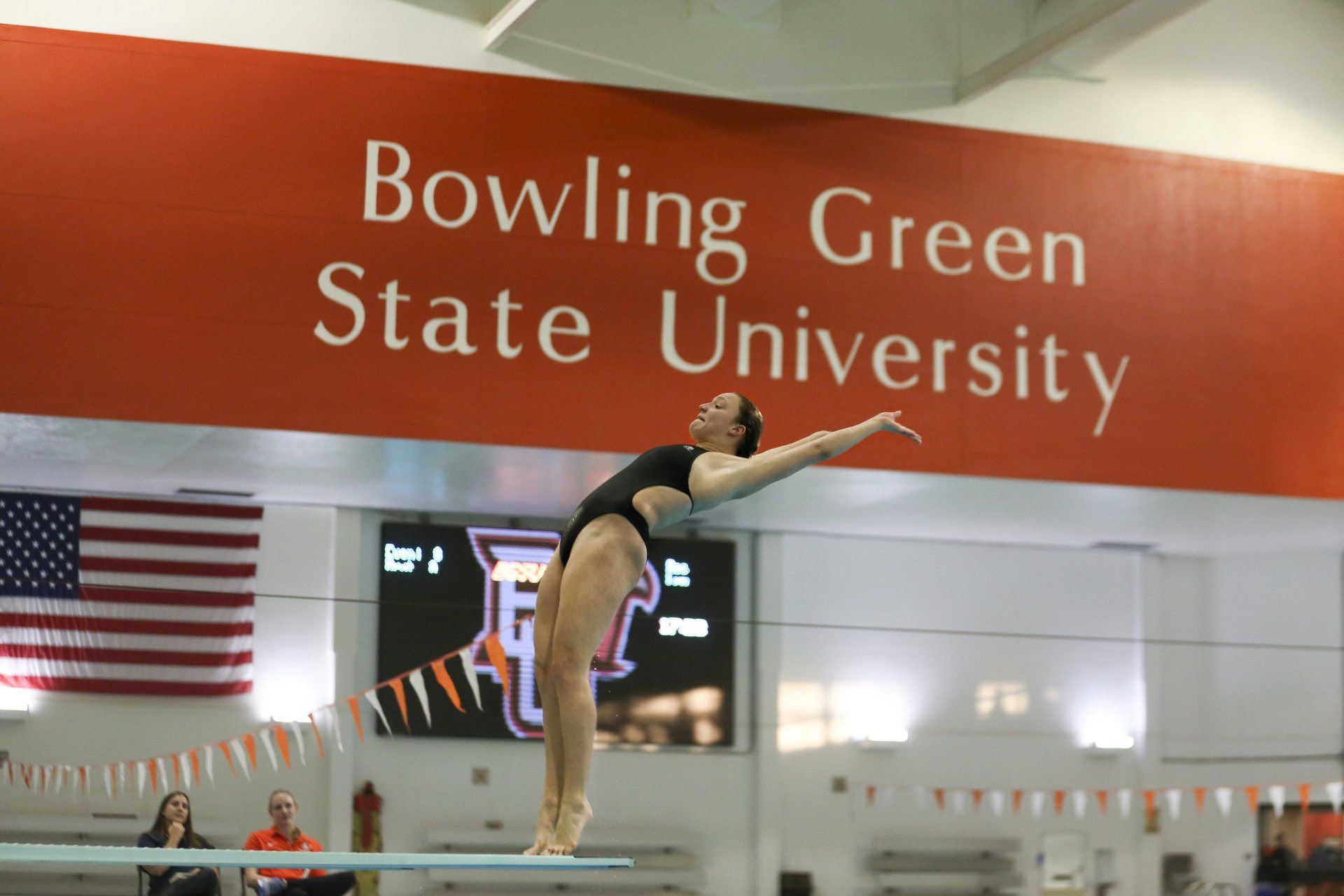 As highly accomplished senior student-athletes, Talisa Lemke and Jovannah East were prepared to finish with their best seasons yet. Both had the goal of competing nationally in the postseason, but these aspirations were cut short due to the COVID-19 pandemic.

During her first season as a member of the BGSU women's swimming and diving team, Lemke was named Mid-American Conference Freshman Diver of the Year and set multiple school records. One of her biggest collegiate accomplishments was qualifying for the NCAA Championships as a sophomore.

“It was a great feeling to compete with athletes from all over the United States at such a big event,” Lemke said.

She also was named MAC Co-Diver of the Year, Academic All-MAC and first-team All-MAC during the 2017-18 season. Lemke continued to soar to new heights, breaking her own records and advancing to the NCAA Diving Zones all four years. Despite the cancellation of this year’s NCAA Championships, Lemke was named to the CSCAA All-America team. She also was MAC Diver of the Year, MAC Most Outstanding Senior and MAC Distinguished Scholar-Athlete during the 2019-20 season. At the 2020 Ziggy Awards, Lemke received her most recent awards, including Female Senior Scholar-Athlete of the Year and the Falcon Medal of Honor.

Throughout her time at BGSU, Lemke has grown not only athletically, but also academically. As an international student from Germany, Lemke was presented with the typical first-year challenges, as well as English being her second language. Despite these headwinds, she excelled from the very beginning as a theatre and film major with a specialization in acting/directing, maintaining a 4.0 grade point average.

She was awarded the Cheney Academic Award by the BGSU Department of Theatre and Film. This award is presented for the highest GPA in the graduating class of theatre. And, for the second year in a row, she was named to the CoSIDA Academic All-District Women's At-Large team. As part of District 5's First Team, Lemke was one of just 12 student-athletes selected (and just one of three from the MAC). Lemke will advance to consideration for Academic All-America honors, which will be announced in June.

She has overcome the challenges of balancing academics and athletics.

“It taught me good organization and communications skills as well as how to be a leader and be confident, which will always be helpful in the future and professional world,” Lemke said. “I improved every year by learning new dives and scoring more points. It is great to see that each year the hard work pays off.”

She plans on continuing her passion for theater here at BGSU, as she embarks on a new journey in the University's Theatre Graduate Program.

Falcon Gymnastics also had an outstanding senior with numerous accomplishments throughout her time at BGSU. East started off as a tremendous freshman student-athlete. She received the title of MAC Freshman of the Year as well as first-team All-MAC. During her sophomore year, East became just the second BGSU gymnast to ever reach the NCAA National Championships and the first Falcon ever to compete all-around at nationals. She was also MAC Vault Co-Champion that year.

Her competitive success did not end there. East qualified for the NCAA Regional competition in the all-around and received the title of Co-MAC Champion on beam during the 2019 season. Although she was unable to finish her senior season due to the pandemic, East still had an exceptional 2020 season. She was named MAC Gymnast of the Week three times and finished her career with 114 top-three event finishes.

While competing at the national level throughout her gymnastics career, East also managed to maintain a good grade point average in her sport management major and general business minor. She has a passion to see all sides of the athletics industry and had the opportunity to intern with Falcon Football and the director of operations. This experience allowed her to see the day-to-day processes of a Division-I team other than gymnastics. For her final semester, she sought out another internship, but this time at the high school level. It was important for her to see the process of developing high school student-athletes before coming to the collegiate level.