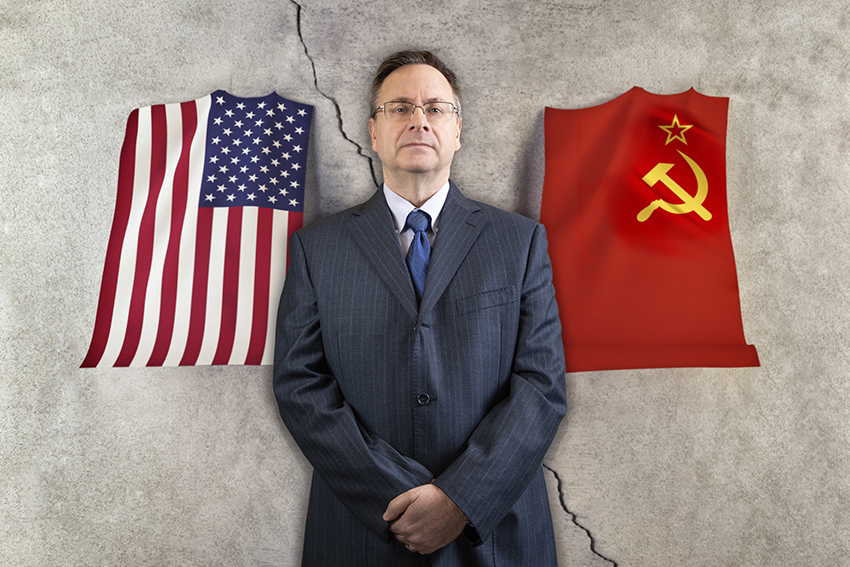 It is generally accepted that the Cold War lasted for about a half century after the end of World War II, but it isn’t that simple according to Dr. Walter Grunden, associate professor of history at Bowling Green State University.

“As a historian, it sure doesn’t look like it ended to me,” Grunden said. “People might want to think it’s over, but we can’t escape the Cold War. It’s still very much with us.”

Before COVID-19 pandemic hit, Cold War countries such as Russia, China and North Korea were a constant feature in the nightly news.

“Everything was Russia, Russia, Russia,” Grunden said. “People still have a concern about Russia and it is, in part, because of the carryover of that Cold War sentiment. They had been the enemy for so long that many people think it’s impossible for us to be friends. Even though we want to say the Cold War is over, maybe it really isn’t — at least not everywhere.”

Grunden recently was appointed to the Cold War Advisory Committee, which assists the U.S. Secretary of the Interior in identifying sites and resources to be designated national historic landmarks significant to the Cold War, as well as preparing a theme study on Cold War landmarks. Grunden, who has the status of a special government employee, participated in his first committee meeting at the beginning of April via conference call.

“Walt will bring the polished and trained eye of a scholar to the Committee, while delivering national prestige to the University,” said Dr. Thomas Snitch ’75, ’15 (Hon.), director of federal relations at BGSU. “I was absolutely overjoyed when he decided to apply because he is a meticulous researcher and he really knows how to write. I immediately called a friend at the White House and said, ‘You seriously need Walt Grunden.’

“It is a big deal for BGSU, and we should actively look for appointments to other national commissions for members of our distinguished faculty.”

Grunden said he is honored by the appointment and appreciates that Snitch encouraged him to apply for the position.

“It’s nice to be recognized in this way and to have your work validated at a certain level and your expertise recognized,” Grunden said. “I’m especially happy to be able to do that here at Bowling Green. Sometimes, I feel like we have to work twice as hard to be recognized just as much as universities like Harvard or Ohio State. There are so many people on this campus who are really top-notch scholars, just real A-listers. The faculty here could be teaching or working anywhere and they produce great scholarship. It’s great that someone can represent Bowling Green at that level, and I’m proud to do it.”

Those relationships with China, North Korea and Cuba are still ongoing today — and they are critical to U.S. diplomacy.

“The origins of North Korea’s nuclear weapons program are tied to Cold War imperatives of the Soviet Union and China’s interests as well,” Grunden said. “The formation of the states of North and South Korea have everything to do with the Cold War.”

In addition to being an authority on World War II and the Cold War, Grunden is an expert on weapons of mass destruction, including nuclear weapons and chemical and biological weapons.

The Cold War always has been an area of interest for Grunden, even though he made his professional mark in the era of World War II earlier in his academic career.

“I sort of got pegged as a military historian and a historian of World War II,” he said. “A lot of the classes that I teach and a lot of the other academic interests that I have are well after World War II, so I have been trying to focus more on the Cold War years and even more contemporary history as well. Sometimes, once you’ve been identified as having expertise in a certain area, it can be hard to move beyond that, but I think being appointed to the Committee can help me do just that. People will see that I have expertise well beyond World War II. My current interests are really more about the Cold War on up to present-day Asia.”

Grunden’s appointment also aligns with the University’s mission of contributing to the public good.

“My involvement with the advisory board would certainly fall under service,” he said. “Most faculty members have three areas of employment on which they are evaluated: teaching, scholarship and service. But, for me, this appointment goes well beyond the expectation of academic service; it is a public service and a way that as a historian I can engage the public and national interests well beyond the borders of Bowling Green and Ohio. There definitely is an academic service component to it, but it’s also an opportunity for me to serve the nation in some way, and I’m proud to be able to do that.”

Grunden started the year as a Fulbright scholar in South Korea, but his scholarship was cut short due to the COVID-19 pandemic. He was teaching a course on comparative science policy, focusing on nuclear issues, before he and his wife had to flee the country.

“It was a real disappointment to have to leave like that,” he said. “There were so many meetings, events and programs that were canceled as a result of the pandemic. Once Fulbright canceled the program worldwide for the year, however, my research agenda was no longer viable. I’m working with colleagues abroad to put together a comparative study of national public policy responses to the pandemic, so maybe some good can come of it after all.”

BGSU’s Department of History in the College of Arts and Sciences has had more public history offerings in the past 10 years or so, Grunden said.

“I’ve always been interested in public history and the Cold War Advisory Committee is an aspect of public history where I can apply some of my expertise,” he said. “With our department’s focus on public history, we can prepare our graduates for careers in museology and any other areas where public history can be utilized such as in the National Parks Service, for example.

“When you think of an advanced degree in history, we want people to understand there are many types of employment opportunities available outside of academia. Public history can contribute immensely to the public good.”