The Curse of the House of Rookwood is a gothic horror tabletop, role-playing game 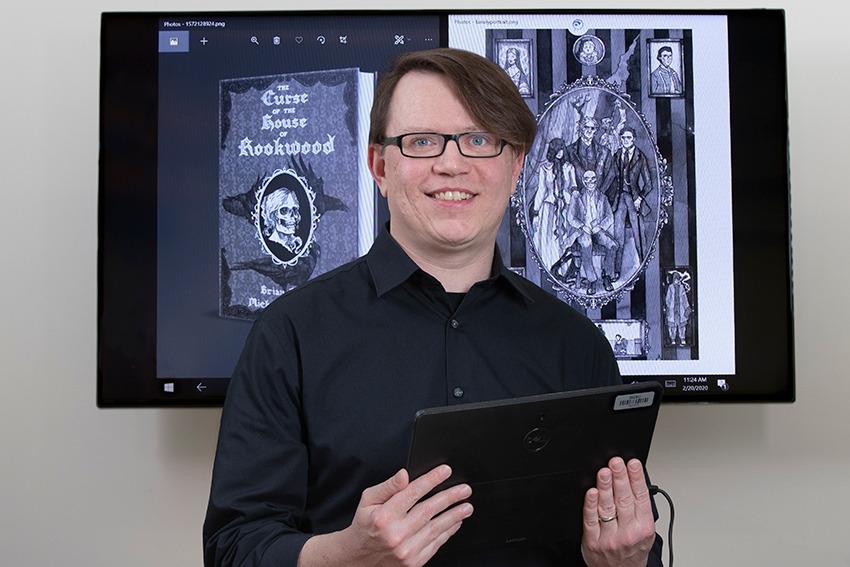 Halloween may be an October holiday, but for those like Bowling Green State University Applications Developer Mike Addison, the time for strange tales and creepy happenings is year-round.

His new game, "The Curse of the House of Rookwood," aims to let players embark on a bizarre adventure to combat an ancient curse — if they can work together.

Addison, a 1999 BGSU alumnus, studied environmental science and biology, and has been with the Information Technology Services department at BGSU for about three years.

Rookwood is not Addison's first foray into creating games. Developing them as a hobby for more than 10 years, he also created "Space Princess," a game designed for bipolar awareness. This goal of supporting a cause carried over to "Rookwood as well." After a Kickstarter campaign, Addison plans to donate to The Cocoon, a shelter for survivors of domestic violence in Bowling Green.

"One of my goals as a game publisher is to support causes that I believe in with the games I create," Addison said. "Once our project funding is complete, Nerdy Pup Games will make a charitable donation to The Cocoon based on the results of funding."

Rookwood is a gothic horror tabletop, role-playing game whose characters are members of a cursed family. The two main components are powers of the Curse and Skeletons. Each family member may have some supernatural ability, but each use makes them more inhuman. In addition, each member is dealing with some kind of skeleton in their closet (sometimes literally) that prevents them from working with other players. Players must work to overcome their characters' curse and their own dilemmas to save the family from the ancient spell. It can be played as one generation, or multiple generations trying to break the curse.

"The game started as a way for a group of close friends of mine to play a game once a year, but have a continuing story from year to year without having to remember a lot of details of where we left off," Addison said.

The Kickstarter campaign ran through November and blew away its goal, amassing more than $9,000 in support by Dec. 1. Whether it is raising awareness for bipolar disorder or donating money for domestic violence survivors, Addison will continue to support his community by creating fun games for everyone to play and combat any skeletons that may be lurking in their own closets.

"My hope," Addison said, "is that the game will allow RPG players to tell fantastic, personal and relevant stories in a way that other games have not."