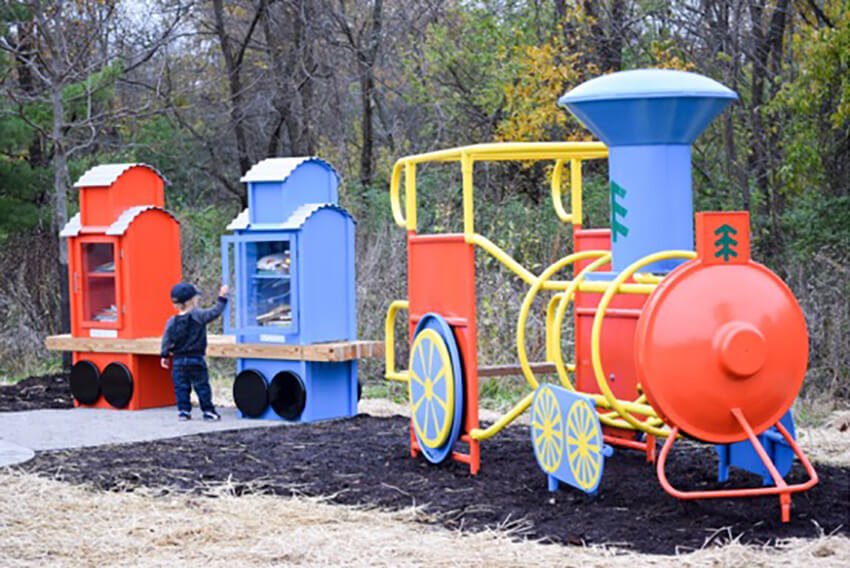 The second in a series of Little Free Libraries was installed and opened to the public last November at Iron Horse Park in Centerville, Ohio. A collaboration between the Friends of the Washington Centerville Public Library, Centerville Washington Park District, the Centerville Rotary Club, and Patrick Hansford Associates, the Libraries are based on the national program of “take a book, leave a book.”

The Library design recalls the trains that once churned next to Iron Horse Park in Centerville. The original series of designs were developed by father and son architects, Patrick Hansford ‘83 and Nicholas Hansford ‘15.

The second in the series was designed by Patrick. Constructed by employees of the Centerville Washington Park District, a popular playground “train” is located next to the Library to complete the imagery. The newest Little Free Library is near the new playground dedicated the same day as the new Library.

Nicholas Hansford graduated from Bowling Green State University with his Bachelor of Science in Architecture. Nicholas is a Designer for Callison/RTKL in Seattle.

Both father and son received their Master of Architecture from Miami University.