A pair of alumni, Vandana Pednekar-Magal and Doug Good, addressed the graduates 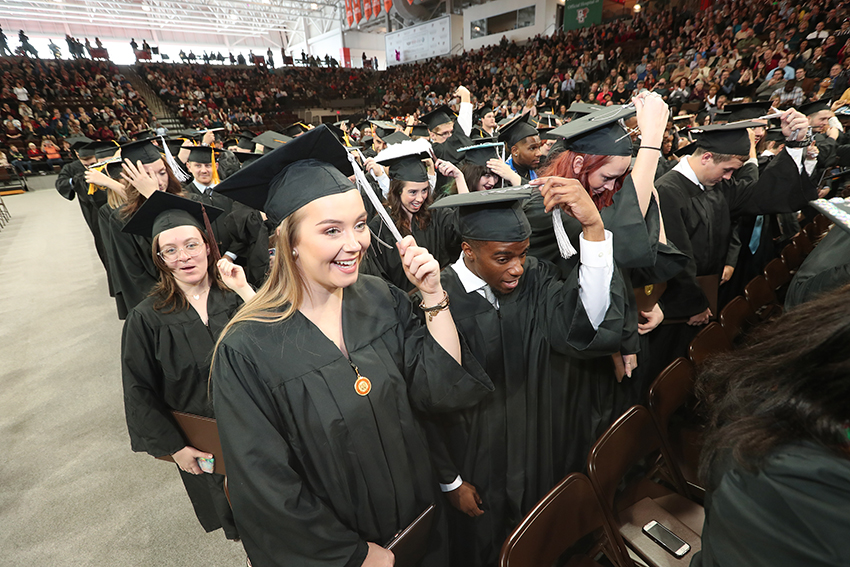 Nearly a thousand students now hold the title “alumni” after their graduation from Bowling Green State University this weekend. The University held two ceremonies at the Stroh Center on Dec. 15 and Dec. 16, marking its 290th graduation.

Friday evening’s ceremony included the Graduate College and the colleges of Business; Health and Human Services; Musical Arts; Technology, Architecture and Applied Engineering; and BGSU Firelands. Graduating Saturday were the colleges of Arts and Sciences and Education and Human Development.

The December graduating class included 954 candidates. Among the undergraduates, 56 received associate degrees and 682 earned bachelor’s degrees. Of those, 142 were honored for their high grade-point averages. The 192 graduate students included 172 receiving master’s degrees and 20 receiving doctoral degrees.

The graduating class included students aged 18 to 60, among them 71 international students representing 17 countries.

Addressing the Friday candidates was BGSU alumna Vandana Pednekar-Magal, who received master’s and doctoral degrees from BGSU. A professor of journalism and media communication at Grand Valley State University in Michigan, she has served as the director of GVSU’s School of Communications, which houses six academic programs including a master’s program with 1,600 students and 40 full-time faculty.

BGSU alumnus Doug Good addressed the Saturday candidates. He received a Bachelor of Science in computer science in 1990 and went on to a career in IT spanning 27 years, with roles at NCR, Bay Networks and Cisco, where he most recently served as vice president of engineering and architectures, Americas Sales. Good has been Cisco’s executive sponsor for BGSU and is a supporter of the University’s Agile Software Factory.