BGSU basketball teams off to strong starts this season

The Bowling Green State University men's basketball team is off to a hot start this season as the Falcons have compiled a 7-3 record through the first 10 games of the season, and the women’s basketball team defeated Xavier 63-53 Dec. 6 at the Stroh Center to improve to 7-1 on the season.

Measuring up against nonconference foes is an important step for Coach Michael Huger’s young team, he said.

“All of our nonconference games are preparing us for MAC play,” Huger said. “A lot of our guys are freshmen and they don’t know what it’s like yet. That’s the ultimate goal right now — to get ready for the MAC.” 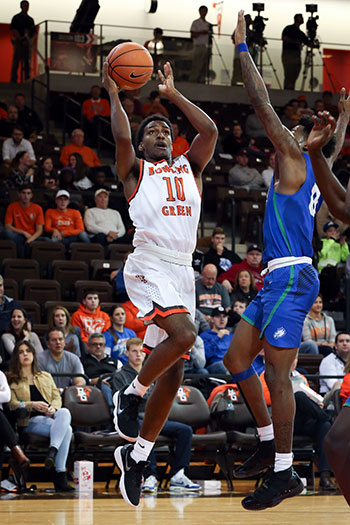 One of those freshmen, Justin Turner, a 6-foot-4 guard from Detroit, leads the team in scoring with a 17.0 average. He has scored more than 20 points five times this season and is shooting 50 percent on 3-point attempts.

As a team, the Falcons are scoring 84.6 points per game and shooting nearly 41 percent from 3-point range.

In the women’s game Dec. 6,  Caterrion Thompson, a 5-10 sophomore guard from Lima, Ohio, who came into the game averaging 2.4 points per game, led the Falcons with 19 points. Andrea Cecil, a 6-1 guard/forward from Oak Harbor, Ohio, added 14, and 5-10 junior guard Carly Santoro of Bellevue, Ohio, had 12.

Santoro was named the MAC player of the week Dec. 6 for the second time this season. In a 90-77 win over Valparaiso, she scored 29 points and had 13 rebounds and a career-high six assists. Santoro leads the team in scoring with a 16.4 average.

BGSU plays at South Dakota State on Dec. 9 and hosts Ferris State at 7 p.m. Dec. 18 before traveling to Cincinnati on Dec. 21 to conclude the nonconference schedule. The Falcons travel to Western Michigan on Dec. 30 to open MAC play.