Transient Canvas to perform in Music at the Forefront series 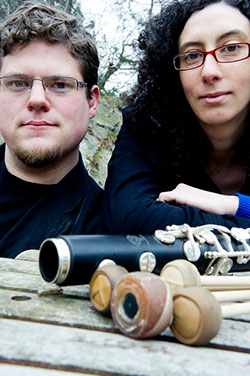 Bass clarinet and marimba duo Transient Canvas will give a free performance on Nov. 20 as part of the Music at the Forefront concert series sponsored by Bowling Green State University’s MidAmerican Center for Contemporary Music. The concert begins at 8 p.m. at the Clazel Theatre (127 N. Main St.) in downtown Bowling Green.

Hailed as "superb" by the Boston Globe, and "nothing short of fabulous" by the Boston Musical Intelligencer, Transient Canvas members clarinetist Amy Advocat and percussionist Matt Sharrock are elevating the roles of bass clarinet and marimba by commissioning new repertoire that expands the limits of their instruments and explores the seemingly limitless tapestry of color and character of their combination.

The duo has commissioned over 75 works by emerging and well-established composers from all over the United States, and has toured extensively in the U.S. and Europe. In August 2017, Transient Canvas released its first album, “Sift,” on New Focus Recordings to rave reviews. A KLANG New Music reviewer called it "one of the more refreshing things I've heard in recent years."

Dedicated to spreading their repertoire, Advocat and Sharrock have been presented by the Alba (Italy) Music Festival; SoundNOW Festival in Atlanta; Classic City New Music Festival in Athens, Georgia; New Music Gathering and the Guerrilla Composers Guild in San Francisco; Moore Hall Recital Series in Pembroke, North Carolina; New Music at the Short North Stage in Columbus, Ohio, and a host of other venues. In Boston, they are regularly featured on the Equilibrium, Original Gravity, Opensound and New Gallery concert series.

Equally dedicated to performing and educating the next generation of performers and composers, Transient Canvas has presented master classes and composition workshops at universities nationwide, the Boston Conservatory at Berklee, and the Alba Music Festival Composition Program.

Music at the Forefront is an annual concert series featuring performances by accomplished and innovative performers of contemporary music. For more information, contact director Kurt Doles at the MidAmerican Center for Contemporary Music at 419-372-2685 or at kdoles@bgsu.edu.