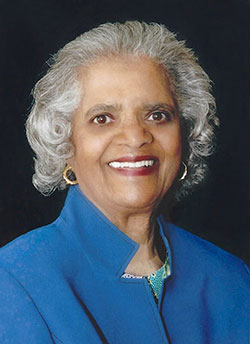 Dr. Mary McKinney Edmonds, 85, died Oct. 11. A trailblazer and leader on many fronts, she joined Bowling Green State University in 1981 as dean of the former College of Health and Community Services, becoming the University’s first African-American dean.

An advocate for improved access to education and health care for minorities and the elderly, she also promoted cultural competency among health care providers to address disparities in treatment.

In 1983, following a national search, Edmonds was appointed vice president of the newly created Division of Student Affairs, where she implemented a number of significant services and programs to improve the lives of students and raise the campus community’s consciousness about diversity and inclusion.

“Bowling Green State University is simply a better place because of the skilled and dedicate leadership and commitment of Dr. Mary McKinney Edmonds,” said President Mary Ellen Mazey. “She will be missed by the BGSU community and all who knew her.”

Edmonds created the Office of Multicultural Affairs (first named Office of Minority Affairs); promoted recruitment and retention of minority students and assistance with financial aid; added the position of director of off-campus housing, designed especially for graduate and international students; and spearheaded the creation of a Prevention Center for Alcohol and Other Drug Abuse, for which she obtained funding from the U.S. Department of Education.

She received numerous recognitions nationally and from BGSU, including the 1984 William T. Jerome Award presented by Undergraduate Student Government to administrators who have made outstanding contributions to the welfare and betterment of students, and the Women in Communications Inc. award for her concern for minorities and women, whether faculty, staff or students.

Memorial contributions can be made to the Mary M. Edmonds Scholarship fund at Bowling Green State University.